10 of NASA’s most out-of-this-world illustrations 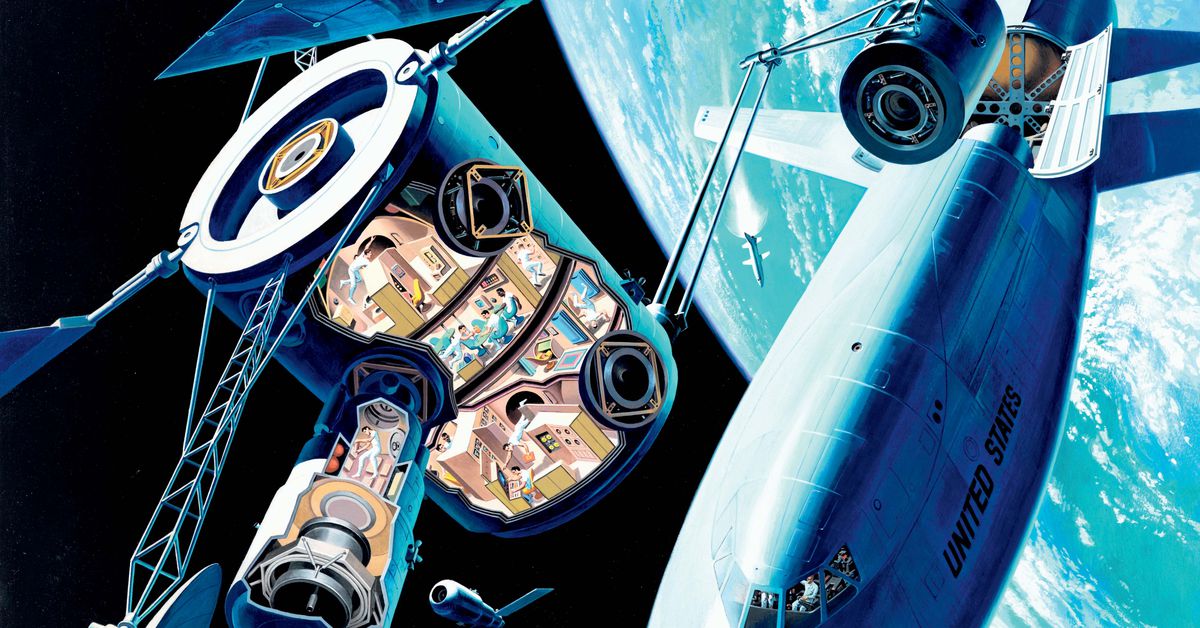 Even rocket scientists have to get a little artsy. (Motorbooks/)

Artists often think outside the box. But when you’re hired by NASA, you have to literally think outside of this world. Over the last sixty-or-so years, in addition to its unprecedented scientific discoveries, NASA has also published some striking art pieces that portray ideas that range from the sci-fi proposals of the 50s and 60s to artistic recreations of real space adventures of the modern era.

The Art of NASA, a new compilation of some of the most creative, funky, and celestial masterpieces ever to grace the desks of space explorers and scientists, is out this week. Here’s a sampling of the outrageous work.

An impressionistic and dramatic 1963 drawing of the Lunar Landing Research Vehicle which was used to train astronauts for the moon landing. (Patrick Short/)

Artist Carl Zoschke captured this scene of an Apollo lunar module taking off in the 1960s, though with probably more flair and brilliant colors than was actually present at the time. (Patrick Short/)

The Skylab, launched in 1973, is still the largest spacecraft ever sent to space with just one rocket. This is an artist’s rendering of what was going on inside. (NASA/)

After the moon landing, the idea of life in space became more enticing than ever for scientists and artists alike, inspiring work like this 1970 drawing for National Geographic. (NASA/)

This sketch of an orbiting space hotel was drawn to help conceptualize a space ship in the 1968 movie 2001: A Space Odyssey. (NASA /)

This is an artist’s depiction of the 2014 ATV from the European Space Agency that would become the main form of propulsion for NASA’s Orion spacecraft. (Chris Calle/Family of Paul Calle/)

A drama-filled illustration of the Ulysses spacecraft crashing through the tail of a comet. (NASA/)

If the Galileo spacecraft had fully extended it’s main antenna while orbiting Jupiter (it ended up only partially opening up), this is what NASA artists think it would’ve looked like. (NASA/)

Living in space is still a pretty far-out idea, but Princeton University physics professor Gerard K. O’Neill thinks this could be what it would look like. With O-Neill’s ideas in mind, artist Rick Guidice whipped up a whole series of art depicting futuristic outer space life. (NASA/)

In 2018, the Parker Solar Probe took super-close up images of the sun and forever changed what we know about space weather. This is one artist’s rendering of the probe hovering above the sun’s tumultuous surface. (NASA/)