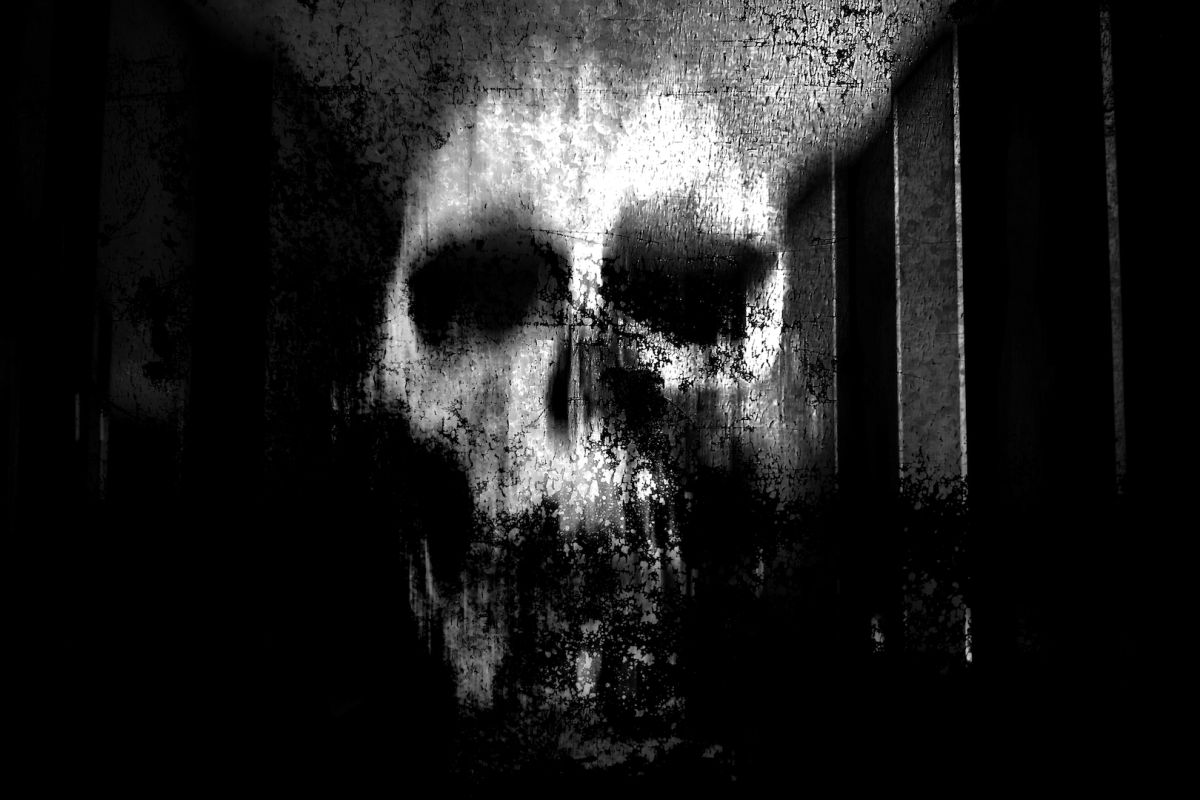 Halloween is a ghoulish time of year, when people tell ghost stories about werewolves, black cats, zombies and vampires.

Some of these creepy tales have leaped from the realm of the mythical into real life: humans who felt as though they were transforming into wolves, a man who not only drank his blood but also the blood of complete strangers, and a woman who got an exorcism after she saw disturbing faces circling her.

Here’s the science behind 10 particularly disturbing Halloween horrors that have come to life.

It sounds like a scary Halloween costume: A man with bloody tears pouring down his face. But for one man in Italy, such tears were the real thing; the result of a rare condition that causes people to cry blood.

The 52-year-old man went to an emergency room after bloody tears fell from both his eyes, something that had never happened to him before, according to a report of the case, published in The New England Journal of Medicine. Although the tears looked dramatic, they were not painful, and the man had not experienced any facial trauma.

He also had normal vision and was able to move both of his eyes without problems, Live Science previously reported.

Deep in the rainforests of Guyana live the most enormous spiders you’ve ever seen — bigger than what you’re imagining.

Known as the South American Goliath birdeater (Theraphosa blondi), the colossal arachnid is the world’s largest spider, according to Guinness World Records. Its leg span can reach up to a foot (30 centimeters), or about the size of “a child’s forearm,” with a body the size of “a large fist,” Piotr Naskrecki, an entomologist and photographer at Harvard University’s Museum of Comparative Zoology, previously told Live Science. And the spider can weigh more than 6 oz. (170 grams) — about as much as a young puppy, the scientist wrote on his blog.

Despite its name, the birdeater doesn’t usually eat birds, although it is certainly capable of killing small mammals. “They will essentially attack anything that they encounter,” Naskrecki said.

3. Wriggling worms beneath the skin

A woman in Russia noticed a migrating lump in her face that she couldn’t explain. She eventually visited an eye doctor, who also witnessed a “superficial moving oblong nodule at the left upper eyelid” — in other words, a lump — according to a  report of the case published in The New England Journal of Medicine.

The woman was infected with a type of parasitic worm called Dirofilaria repens. These thread-like worms naturally infect dogs, cats, foxes and other wild mammals, and typically live in the tissue under the skin, Live Science previously reported. Humans are “accidental” hosts — in other words, not where the worms want to end up — and once a worm gets into a human, it typically can’t reproduce.

Related: 8 Awful Parasite Infections That Will Make Your Skin Crawl

In a similar, but even more-rare case, a woman visiting the central California coast contracted a horrifying infection with a rare parasitic eye worm when she went on a trail run, Live Science previously reported.

The woman is only the second person known to have contracted this particular worm, which typically infects cows, according to a report of the case, published in the journal Clinical Infectious Diseases.

The woman said she felt irritation in her right eye and so flushed the eye with tap water. That’s when a 0.5-inch (1.3 centimeters), wriggly roundworm came out. After this discovery, she looked more closely at her eye and saw a second roundworm, which she also removed, the report said.

Lycanthropy, or people transforming into werewolves, is a common staple of horror movies (and music videos, thanks to Michael Jackson’s “Thriller”). Most people know this transformation is fantastical, but that’s not the case for people with clinical lycanthropy, a delusional condition that leads the patient to believe that it is happening for real.

Since 1850, there have been 13 reported cases of lycanthropy in human patients, according to a 2014 research article in the journal History of Psychiatry. The condition usually occurs in people diagnosed with schizophrenia, psychotic depression or bipolar disorder, according to the study.

The first case, from 1852, documents how a man in France was convinced he had become a wolf. To prove his case, the man “parted his lips with his fingers to show his alleged wolf’s teeth, and complained that he had cloven feet and a body covered with long hair. He said that he only wanted to eat raw meat, but when it was given to him, he refused it because it was not rotten enough,” Live Science previously reported.

Imagine seeing a monster but being unable to move a muscle after waking up from a deep sleep. This scary scene can be a reality for people with sleep paralysis who also hallucinate.

Sleep paralysis happens when a person wakes up during a stage of sleep called rapid eye movement (REM), when they are typically dreaming, but paralyzed, Live Science previously reported. This inability to move might be an adaption to keep people from acting out their dreams.

It’s less clear why a subset of people with sleep paralysis also hallucinate. But one idea is that the brain is trying to make sense of the paralysis and projects an image of the person’s own body onto a hallucination, according to a 2014 article in the journal Medical Hypotheses, Live Science previously reported.

The man started by cutting himself and drinking his own blood. But soon, his compulsion drove him to attack other people with sharp objects so he could drink their blood, too.

Some Halloween monsters have teeth growing in unexpected places. This horrifying condition became a reality for a 4-month-old infant in Maryland, whose brain had several teeth growing in it.

The child had a tumor known as craniopharyngioma, which can grow to the size of a golf ball. Doctors removed it during a successful surgery, Live Science previously reported.

Other tumors, known as teratomas, are known to grow teeth. But this was the first reported case of a craniopharyngioma tumor sprouting teeth, the doctors said.

A “zombie” outbreak struck a New York neighborhood after people there started taking a type of synthetic marijuana known as AK-47 24 Karat Gold.

People who took the drug developed zombie-like symptoms, including a slow response time to questions and staring blankly into space, Roy Gerona, a clinical chemist at the University of California, San Francisco, who studied the drug, previously told Live Science.

Synthetic marijuana can be dangerous, sometimes causing seizures and kidney damage, Gerona said. But, in this case, the drug appeared to cause depressant symptoms that had a “zombie-like” effect, he said.

A young woman in Italy sweats blood, and her case has baffled doctors.

The woman told doctors that for the past three years, she had periodically bled from her face and palms, even though she didn’t have any cuts there. These episodes lasted between 1 and 5 minutes, she said.

Historical documents dating to hundreds of years ago show that this condition isn’t new in people, but its origins are unclear. It’s possible that increased pressure in blood vessels causes blood cells to leak into the ducts of sweat glands, but it’s hard to say for sure, Live Science previously reported.

After a 67-year-old woman told her family that she was seeing odd-looking faces hovering around her, her concerned relatives asked a priest whether he would perform an exorcism.

But the woman wasn’t being haunted by wispy demons. Rather, she had Charles Bonnet syndrome, a condition in which a person with declining vision sees complex hallucinations, Live Science previously reported.

The woman had macular degeneration, meaning that the central part of the retinal tissue in her eyes was deteriorating. Sometimes, when the brain experiences a decline from a sensory input, such as vision, it invents its own input, which can lead to visual hallucinations, Dr. Bharat Kumar, an internal medicine resident at the University of Kentucky who treated the woman, previously told Live Science.

In a nightmare case, a man in Brazil was bitten by a vampire bat and died of rabies.

Vampire bats don’t usually prey on humans, but one species of the bat (Diphylla ecaudata) does, according to new research.

Rabies can be stopped if it’s caught and treated early enough. But tragically, this man didn’t get treatment in time, Live Science previously reported.

Related: How rabies inspired folktales of werewolves and vampires

Male cicadas infected by a particularly gruesome parasitic fungus become zombies with an undercover mission: They broadcast a female’s sexy come-hither message to other male cicadas, luring their unsuspecting victims to join the zombie cicada horde.

As the parasitic fungus called Massospora eats away at a cicada’s abdomen, replacing it with a mass of yellow spores, the fungus also compels males to flick their wings in movements that are typically performed by females to attract mates, Live Science previously reported.

Healthy males hurry over for what they think is some female company, then try to mate with the infected male, which passes along the Massospora infection. This and other new discoveries are helping scientists to piece together how Massospora turns cicadas into mind-controlled zombies, according to a study published in the journal PLOS Pathogens.

Black cats are a mainstay of Halloween. But research shows that a parasite carried by all types of cats (not just black) is linked to increased suicide attempts in women.

Women infected with the cat parasite Toxoplasma gondii were 1.5 times more likely to attempt suicide than women who do not have the parasite, according to a 2012 study published in the journal Archives of General Psychiatry. The parasite causes a common condition known as toxoplasmosis.

It’s unclear why T. gondii would lead to more suicide attempts, but the researchers did control for mental health problems, meaning that the finding was independently linked to the parasite, not just to mental disorders, Live Science previously reported.