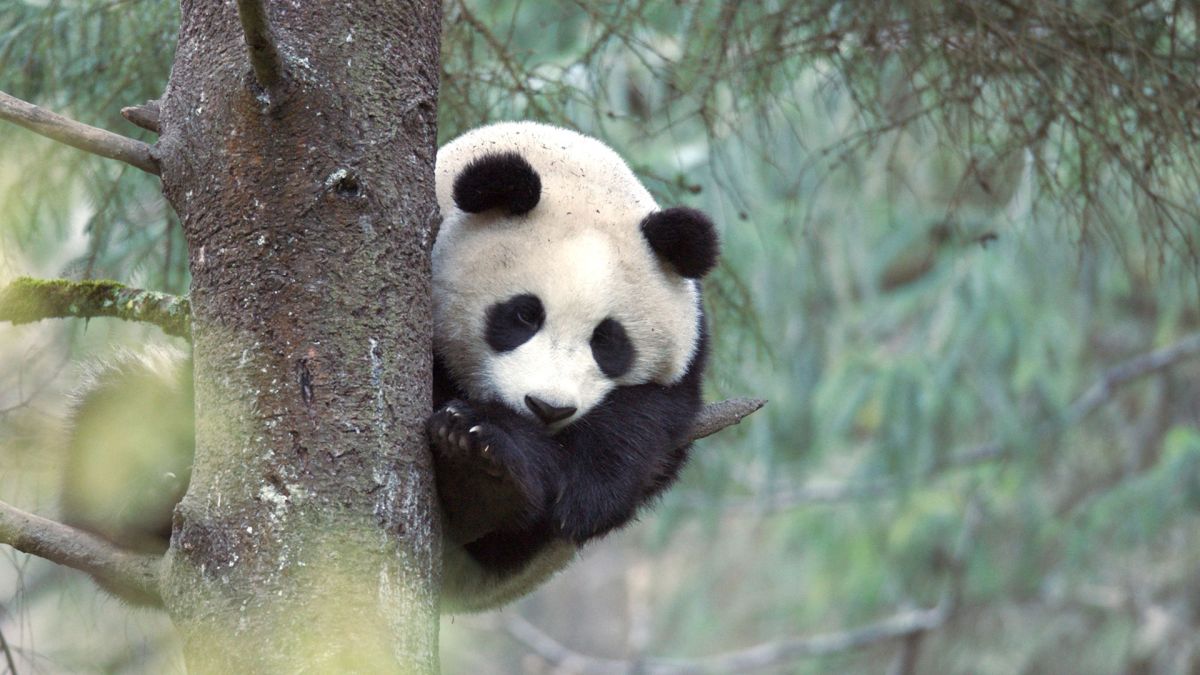 A pair of aggressive male giant pandas roar ferociously on the ground beneath a female perched in a tree, in the first-ever footage of panda courtship and mating in the wild.

For nearly three years, nature filmmakers Yuanqi Wu and Jacky Poon followed pandas in China’s Qinling Mountains, hoping to capture evidence of elusive behavior that was unseen in captive animals, which are mated under controlled conditions that do not include competitions between males.

Their patience paid off during breeding season, when they spied two bristling males squaring off at the foot of a tree, with a fertile female in the branches above. This and other remarkable scenes of panda life — including a young cub learning critical survival skills — are part of the new PBS Nature documentary “Pandas: Born to be Wild,” premiering Wednesday (Oct. 21).

Related: In photos: The life of a giant panda

Pandas (Ailuropoda melanoleuca) are popular for their comically round body shape and adorable antics, and videos of captive pandas playing in snow; rolling around like giant balls; using their heads to climb; or even accidentally face-planting, are undeniably enchanting. But when these bears are seen in their natural habitat, “there’s nothing cute and cuddly about them,” Jacky Poon, “Born to be Wild” filmmaker, said in the documentary.

Adult male pandas can weigh as much as 300 lbs. (136 kilograms) and are nearly 7 feet (2 meters) tall when standing upright on their hind legs, according to the World Wildlife Fund. Pandas are highly territorial, and males usually interact with females only during mating season between March and May, WWF says.

In the tense standoff between the dominant, older male panda and an eager rival, the younger male eventually retreated, but when the female came down from her perch, she fought with the victor and escaped. For weeks, the two males trailed her, their growling challenges becoming more frequent and culminating in another tense confrontation. But a week later, when the female was finally ready to mate, just one suitor remained — the younger male.

Male pandas’ bellowing, scent marking and female “hostage”-holding are mating behaviors that may trigger ovulation in female pandas. That could explain why pandas are so difficult to breed in captivity, in the absence of this male competition.

Another star of “Born to be Wild” is a young male cub born through artificial insemination at the Wolong Panda Center and raised there in a special enclosure. Most of the reserve’s cubs grow up around other pandas and human caretakers, and so they are more social than is typical for wild, solitary bears. However, to prepare this young panda for life in the wild as an adult, the caretakers will keep him for three years only with his mother, separated from other pandas and with very limited interaction with people.

But caretakers still need to regularly check the cub’s health and development; to do that, they dress in panda suits, and they further disguise their human scent by dousing themselves with panda urine. Though these costumes may not seem terribly realistic, they are close enough to the real thing to fool a young panda; vision in these youngsters is known to be very poor, PBS Nature representatives said in a statement.