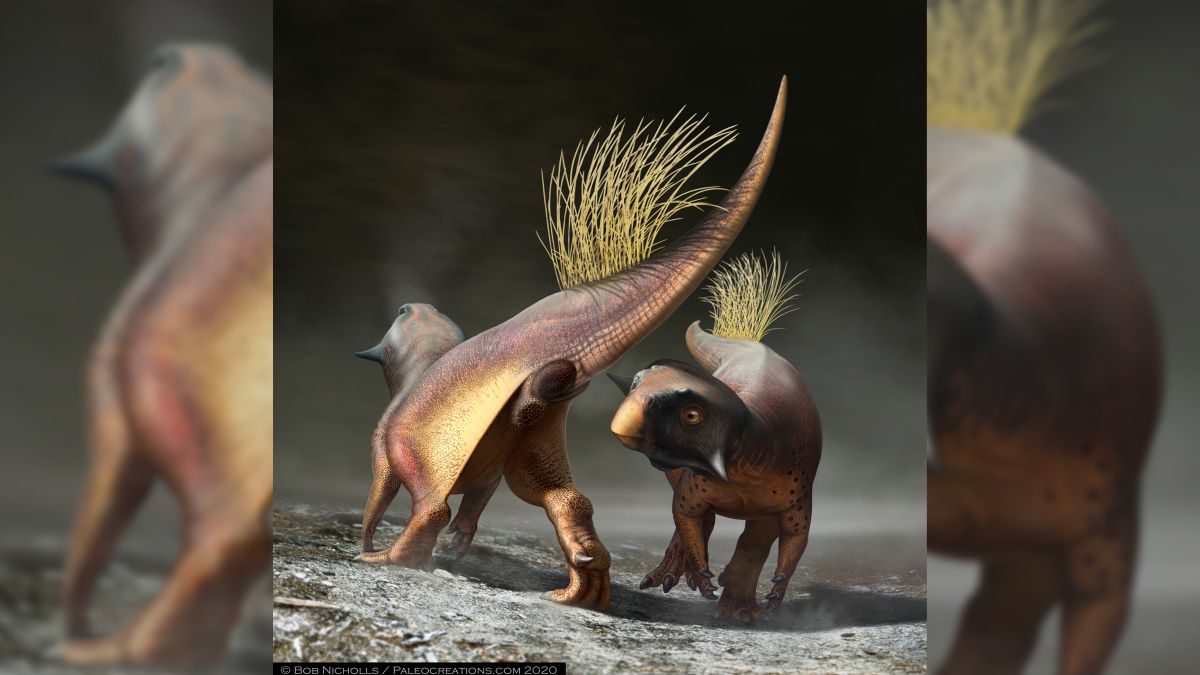 The first dinosaur butthole ever discovered is shedding light where the sun don’t shine. The discovery reveals how dinosaurs used this multipurpose opening — scientifically known as a cloacal vent — for pooping, peeing, breeding and egg laying.

The dinosaur’s derrière is so well preserved, researchers could see the remnants of two small bulges by its “back door,” which might have housed musky scent glands that the reptile possibly used during courtship — an anatomical quirk also seen in living crocodilians, said scientists who studied the specimen.

Although this dinosaur’s caboose shares some characteristics with the backsides of some living creatures, it’s also a one-of-a-kind opening, the researchers found. “The anatomy is unique,” study lead researcher Jakob Vinther, a paleobiologist at the University of Bristol in the United Kingdom, told Live Science. It doesn’t quite look like the opening on birds, which are the closest living relatives of dinosaurs. It does look a bit like the back opening on a crocodile, he said, but it’s different in some ways. “It’s its own cloaca, shaped in its perfect, unique way,” Vinther said.

The well-preserved booty belongs to the dinosaur Psittacosaurus, a bristly tailed, Labrador-size, horn-faced dinosaur, meaning it was a relative of Triceratops. Like its famous tri-horned cousin, Psittacosaurus lived during the Cretaceous period, which lasted from about 145 million to 65 million years ago. Previously, Vinther and his colleagues had studied this Psittacosaurus specimen, found in China, to determine its skin color, and at the time, he noted that its nether regions were preserved.

“Then, I got a chance to look at the specimen again, up close, and suddenly realized, ‘Oh my god, the cloaca is actually quite well preserved, and we can actually see some anatomy that I didn’t think we could see,'” Vinther said. So, he took a closer look with study co-researchers Robert Nicholls, a paleoartist, and Diane Kelly, an expert on vertebrate penises and copulatory systems at the University of Massachusetts Amherst.

None of the reproductive soft tissues (like a penis) were preserved. So the researchers can’t say whether the dinosaur was male or female. Even so, this dinosaur likely had copulatory sex, unlike some birds that bump butts when they do a “cloacal kiss” during reproduction, Vinther said.

To get a more complete picture of Psittacosaurus‘ cloacal vent, Kelly compared it with those of living land vertebrates. The vent is the opening, and the cloaca, which comes from the Latin word for “sewer,” is the muscular chamber behind it. Based on its preserved anatomy, the opening could have been either horizontally oriented, like a bird’s, or vertically oriented, like a crocodile cloaca, she said.

Moreover, the team noticed that the outer regions of the cloaca were covered with a dark shade of melanin. Perhaps this darkly pigmented area was a type of visual display, similar to bright-red butts seen in baboons, the researchers said. The reddish-brown Psittacosaurus was countershaded, meaning it had a dark back and a light underside, so its pigmented posterior would have stood out, he said.

This dark melanin may have also provided antimicrobial protection — something seen in humans. “We have melanin in certain parts of the body that never sees the light of day,” Vinther said. “Our liver is chock-full of melanin … because we don’t want microbial infections in these places.”

And, just like in most land vertebrates (except for mammals, which have more than one hole for defecation, urination and reproduction), this dinosaur used its hole for everything, which explains why researchers found a fossilized poop in its butt. “It’s like a Swiss Army knife of excretory openings,” Vinther said. “It does everything.”

The same Psittacosaurus cloacal vent was described in October 2020, when another team posted their research in the BioRxiv database, meaning it has yet to be peer-reviewed or published in a journal. Vinther, who had shared his data with that team for another project, said the researchers used the cloacal vent data without his permission. However, “there were misunderstandings and miscommunications about the nature of the research on both sides,” said Phil Bell, a senior lecturer of paleontology at the University of New England in Australia, one of the researchers on the October 2020 study.

The new study was published online Tuesday (Jan. 19) in the journal Current Biology.