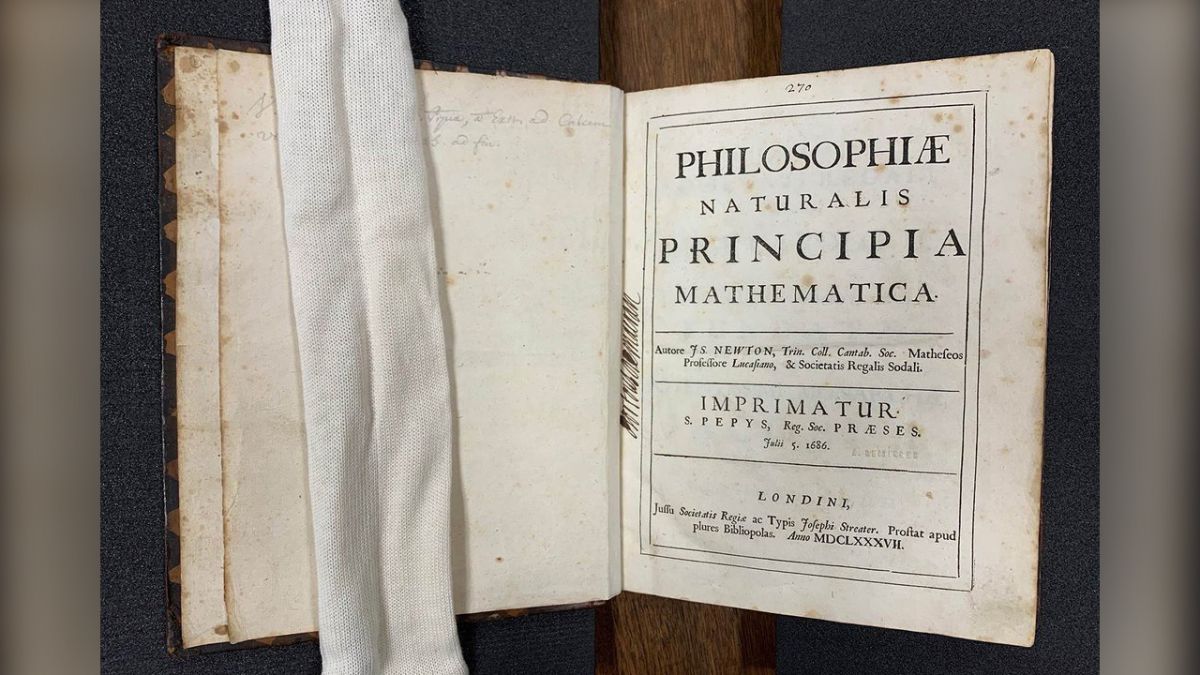 A pioneering book of science theory published by Sir Isaac Newton in 1687 was long considered to be exceptionally rare; by the 20th century, only 189 first edition copies were known worldwide. But after years of sleuthing, a pair of historians tracked down nearly 200 additional copies of the book — and they suspect that hundreds more are yet to be found.

The book is Newton’s “Philosophiae Naturalis Principia Mathematica,” also known as the “Principia.” Written in Latin, the book outlines Newton’s three laws of motion, which are still a cornerstone of modern physics, and explain how gravitational forces shape planetary orbits. First edition copies are so prized that in 2016 one sold at auction for $3.7 million, the highest price ever paid for a printed scientific book, Live Science previously reported.

A census of Principia copies conducted in 1953 revealed 189 books in 16 countries. In the new survey, the researchers tracked down hundreds of long-lost books, eventually tallying a total of 387 in 27 countries. They concluded that this scientific masterpiece, though famously hard to understand, likely had a wider audience upon publication than once thought.

“The older census assumed the print run was very small, because they assumed that very few people could read the book. So they estimated that only about 250 copies were published,” said lead study author Mordechai Feingold, a professor of the History of Science and the Humanities at Caltech in Pasadena, California.

“We believe that perhaps as many as 750 copies were published, which means that there are at least 200 or more copies out there,” Feingold told Live Science.

The investigation began nearly a decade ago with a term paper written by study co-author Andrej Svorenčík, now a postdoctoral researcher in the Department of Economics at the University of Mannheim in Germany. At the time, Svorenčík was a student at Caltech, and he was taking a course in science history taught by Feingold.

Svorenčík was originally from Slovakia, and for the paper he was hoping to identify copies of the Principia in Central Europe, according to a statement. He was astonished to find many copies that had not been included in the 1953 census, and Feingold suggested that they embark on a new survey to correct the outdated total.

In 2012 and 2013, the researchers pursued leads on Principia copies, combing through records, searching library databases and calling libraries to confirm that books were indeed first editions and not facsimiles, Feingold said. One copy that was traced to an auction turned out to have been stolen from a library, which Feingold and Svorenčík promptly notified, Feingold said. Library representatives “contacted the auction house and some negotiation took place,” he said. The library must have received some compensation “because the book came back on the auction block the following year,” he added.

Though the researchers located nearly 400 copies of the book, hundreds more are likely waiting to be discovered, they wrote in the study. Some records documented when Newton sent a book to a colleague, but the trail then goes cold; such is the case for the book sent to the renowned Dutch mathematician and physicist Christiaan Huygens, whose copy is still missing. “And there are many, many other libraries whose catalogs are not online, that we haven’t yet approached,” Feingold said.

In addition to the still-uncounted library copies, many books are also known to be in private collections. “Those are the ones that are most difficult to trace, because most collectors are private individuals who don’t want their names to be mentioned or known,” Feingold said. “We hope that by assuring them through this census that their identity will remain private, they will contact us.”

A glimpse of history

Dozens of the books’ original owners didn’t just read their copies — they made notes in the margins, according to the study. Some readers focused their note-taking on the laws of motion, while others wrote in the section about Newton’s theory of comets or universal gravitation, Feingold said. These scribblings supported the researchers’ conclusion that many people appreciated the book — despite some academics arguing that the tome was so complex that only a very few expert mathematicians ever read it, the researchers wrote.

Finding hundreds of missing Principia copies, many of which were “heavily annotated,” helped the researchers piece together how the book was received in scientific circles across Europe, Feingold said.

One unusual story that they uncovered stemmed from a previously unknown copy that had been sent to the German mathematician Gottfried Leibniz. After Principia’s publication, Leibniz wrote several papers refuting Newton’s work, and he claimed that he did so without ever reading Principia. But Feingold’s and Svorenčík’s discovery suggested that the philosopher wasn’t being quite truthful.

“After finding his copy of the book and some papers of his, it appears that he actually did read the book,” Feingold said. “It’s an example of how tracing the ownership and related papers can tell you a great deal about the history of science, and the history of relations between competitors.”

The findings were published online Sept. 2 in the journal Annals of Science.