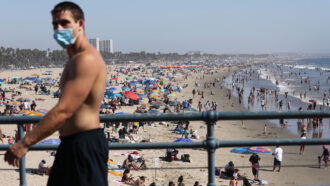 2020 is in a “dead heat” with 2016 for the hottest year on record, scientists with NASA and the National Oceanic and Atmospheric Administration announced January 14.

Based on ocean temperature data from buoys, floats and ships, as well as temperatures measured over land at weather stations around the globe, the U.S. agencies conducted independent analyses and arrived at a similar conclusion.

NASA’s analysis showed 2020 to be slightly hotter, while NOAA’s showed that 2016 was still slightly ahead. But the differences in those assessments are within margins of error, “so it’s effectively a statistical tie,” said NASA climatologist Gavin Schmidt of the Goddard Institute for Space Studies in New York City at a Jan. 14 news conference.

NOAA climate scientist Russell Vose, who is also based in New York City, described in the news conference the extreme warmth that occurred over land last year, including a months-long heat wave in Siberia (SN: 12/21/20). Europe and Asia recorded their hottest average temperatures on record in 2020, with South America recording its second warmest.

It’s possible that 2020’s temperatures in some areas might have been even higher if not for massive wildfires. Vose noted that smoke lofted high into the stratosphere as a result of Australia’s intense fires in early 2020 may have slightly decreased temperatures in the Northern Hemisphere, though this is not yet known (SN: 12/15/20).

The ocean-climate pattern known as the El Niño Southern Oscillation can boost or decrease global temperatures, depending on whether it’s in an El Niño or La Niña phase, respectively, Schmidt said (SN: 5/2/16). The El Niño phase was waning at the start of 2020, and a La Niña was starting, so the overall impact of this pattern was muted for the year. 2016, on the other hand, got a large temperature boost from El Niño. Without that, “2020 would have been by far the warmest year on record,” he said.

But placed in the bigger picture, these rankings “don’t tell the whole story,” Vose said. “The last six to seven years really stand out above the rest of the record, suggesting the kind of rapid warming we’re seeing. [And] each of the past four decades was warmer than the one preceding it.”