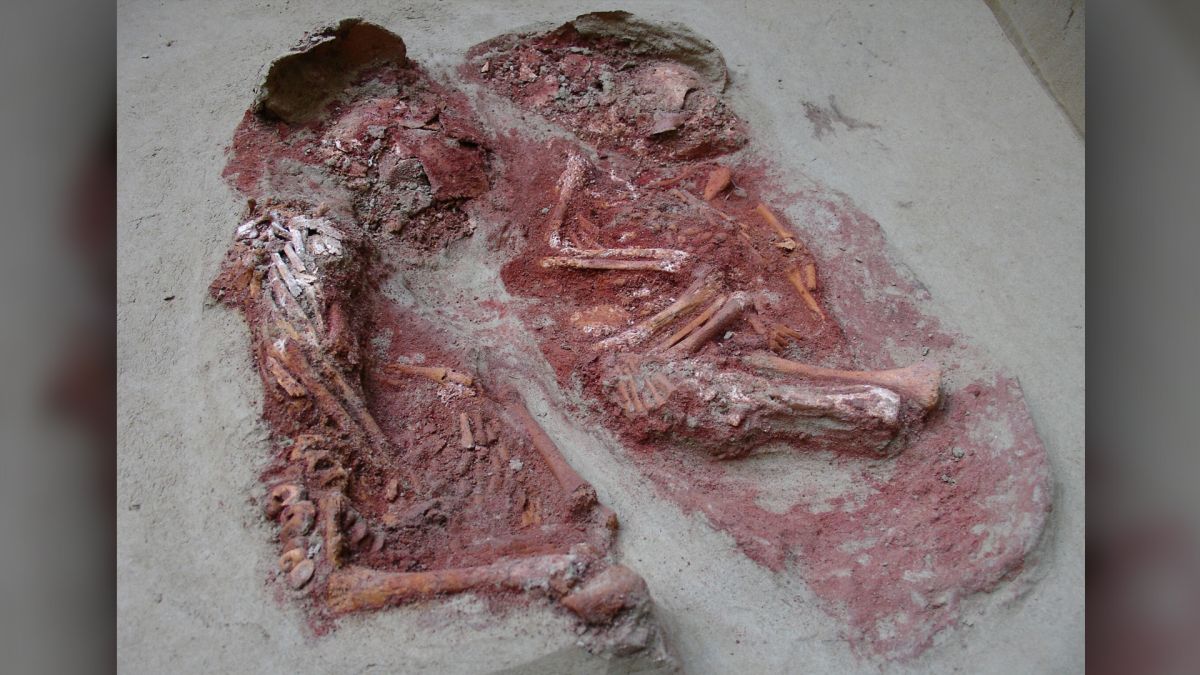 An ancient grave in Austria may represent the oldest burial of twins on record, a new study finds.

The 31,000-year-old burial dates to the Upper Paleolithic (a period lasting from 40,000 to 10,000 years ago), also known as the Old Stone Age. One of the infants died shortly after childbirth, while his twin brother lived for about 50 days, or just over 7 weeks, according to analyses of both babies.

A third infant, a 3-month-old, interred in a burial about 5 feet (1.5 meters) away is likely their cousin, according to the research, published online Nov. 6 in the journal Communications Biology.

Researchers found the twins’ oval-shaped burial at the archaeological site of Krems-Wachtberg, on the bank of the Danube River by the town center of Krems in 2005. The twin infants’ remains were covered with ochre, a red pigment often used in ancient burials across the world. The double burial also contained 53 beads made out of mammoth ivory that were likely once threaded on a necklace, and a perforated fox incisor and three perforated mollusks, which were possibly necklace pendants, the researchers said. A mammoth shoulder blade placed over the burial protected the small bodies interred beneath it over the millennia.

The nearby burial of the other infant also contained ochre, as well as a 3-inch-long (8 centimeters) mammoth-ivory pin, which may have fastened a leather garment together at the time of burial, the researchers said.

The finding made headlines shortly after its discovery, and researchers even created a replica of the twins’ burial, which went on display at the Natural History Museum Vienna in 2013. However, scientists still had much to learn about the ancient burial. So, in the new project, an interdisciplinary group of researchers teamed up to decipher the relationship between these three infants and to determine their sex and age at death.

The study is the first on record to use ancient DNA to confirm twins in the archaeological record, the researchers said. And not just any twins, but identical twins.

This is the “earliest proof of a twin birth,” study senior researcher Ron Pinhasi, an associate professor in the Department of Evolutionary Biology at the University of Vienna, said in a statement (translated from German with Google Translate). Researchers don’t know how common twin births were during the Upper Paleolithic (the rate fluctuates by region and time), but today, twins (both identical and fraternal) happen in about one in 85 births, while identical twins are born in about one in 250 births.

“To discover a multiple burial from the Paleolithic period is a specialty in itself,” study lead researcher Maria Teschler-Nicola, a biologist at the Natural History Museum Vienna, said in the statement. “The fact that sufficient and high-quality old DNA could be extracted from the fragile child’s skeletal remains for a genome analysis exceeded all of our expectations and can be compared to a lottery ticket.”

A genetic analysis of the third infant revealed that he was a third-degree male relative, likely a cousin, the researchers found.

Related: Back to the Stone Age: 17 key milestones in Paleolithic life

To determine at what age the babies died, the researchers looked at each baby’s top second incisor. The team paid special attention to the so-called “newborn line,” a dark line in the tooth enamel that separates the enamel formed prenatally from that formed after birth, Teschler-Nicola said.

Those newborn lines, as well the infants’ skeletal development, suggested the twins were either full, or nearly full-term, babies. It appears that the infants’ hunter-gatherer group buried the first twin, then reopened the grave when they buried his brother.

This finding confirms the cultural-historical practice of reopening a grave for the purpose of reburial, which had never been documented before in a Paleolithic burial, the researchers said.

The team also analyzed chemical elements, including isotopes of carbon, nitrogen and barium, in the tooth enamel, revealing that each of the twins was breastfed. Even though the twins’ cousin survived for three months, “stress lines” in his teeth suggest that he had feeding difficulties, perhaps because his mother had a painful breast infection known as mastitis, or maybe because she didn’t survive the birth.

It’s unknown exactly why these infants died, but the deaths of these twins and their cousin were likely painful events for this Paleolithic hunter-gatherer group, who set up camp and buried their babies by the Danube so long ago. “The babies were obviously of particular importance to the group and highly respected and esteemed,” Teschler-Nicola told Live Science. The extraordinary burials “seems to imply that the death of the babies was a great loss for the community and their survival.”