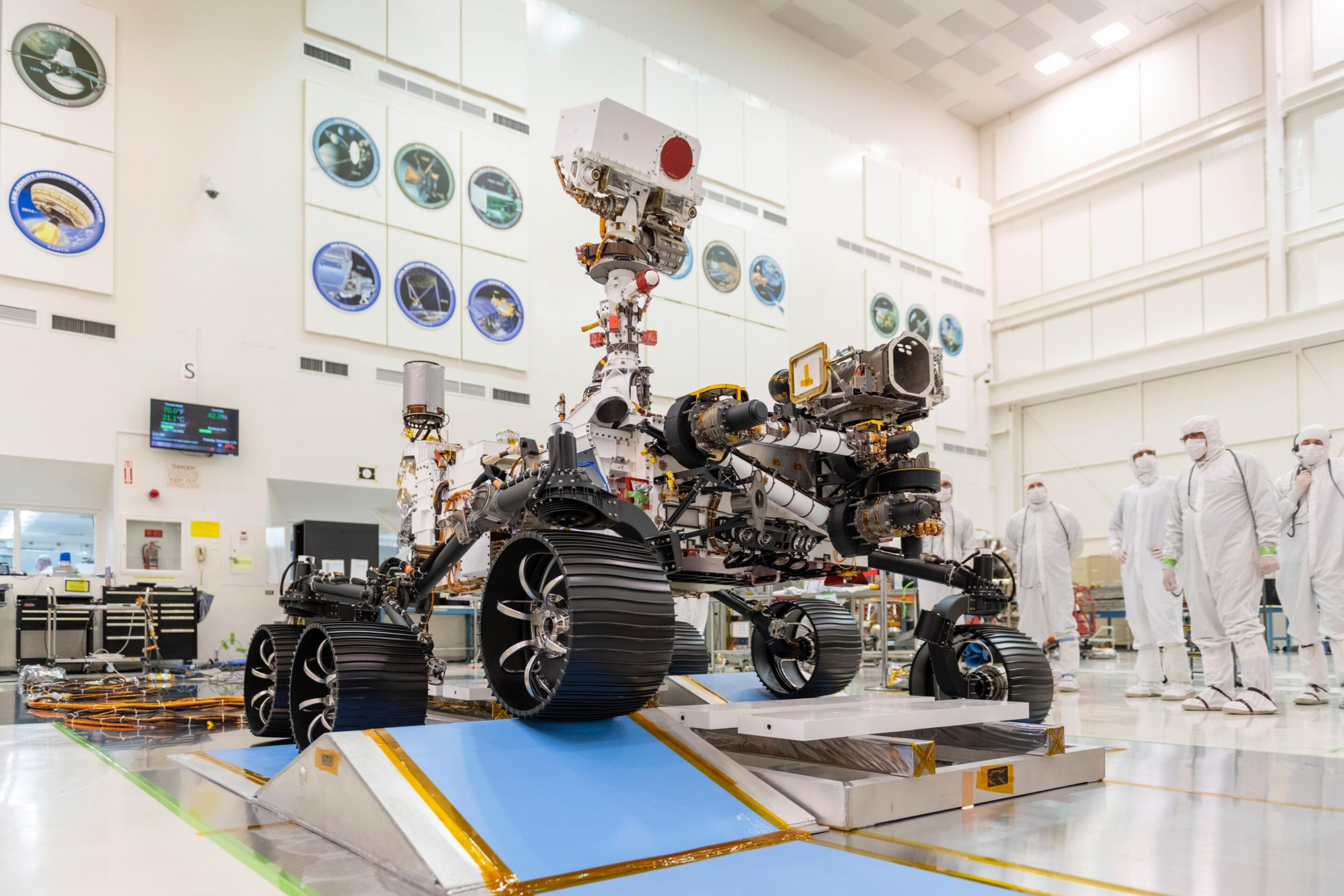 With only about 50 million miles (80 million kilometers) left to go in its 293-million-mile (471-million-kilometer) journey, NASA’s Mars 2020 Perseverance rover is nearing its new planetary home. The spacecraft has begun its approach to the Red Planet and in 43 days, on Feb. 18, 2021, Perseverance will blaze through Mars’ atmosphere at about 12,100 mph (19,500 kph), touching down gently on the surface about seven minutes later.

“We’re working on our last adjustments to put Perseverance in perfect position to land in one of the most interesting places on Mars,” said Fernando Abilleira, deputy mission manager at NASA’s Jet Propulsion Laboratory in Southern California. “The team can’t wait to put these wheels in some Martian dirt.”

Built and managed by JPL for NASA, Perseverance will be joining another rover and lander currently at work on Mars, with several orbiters in the skies above. What sets this six-wheeled robot apart?

1. Perseverance is searching for signs of ancient life.

While the surface of Mars is a frozen desert today, scientists have learned from previous NASA missions that the Red Planet once hosted running water and warmer environments at the surface that could have supported microbial life.

“We want Perseverance to help us answer the next logical question: Are there actually signs of past microbial life on Mars?” said Katie Stack Morgan, deputy project scientist at JPL. “This demanding goal means sending the most sophisticated robotic scientist yet to Mars.”

To tackle this question, which is key in the field of astrobiology, Perseverance carries a new suite of cutting-edge science instruments. Two of them will play a particularly important role in the search for potential signs of past life: SHERLOC (short for Scanning Habitable Environments with Raman & Luminescence for Organics & Chemicals), which can detect organic matter and minerals, and PIXL (short for Planetary Instrument for X-ray Lithochemistry), which maps the chemical composition of rocks and sediments. The instruments will allow scientists to analyze these features together at a higher level of detail than any Mars rover has achieved before.

Perseverance will also use some instruments to gather science data from a distance: Mastcam-Z’s cameras can zoom in on rock textures from as far away as a soccer field, while SuperCam will use a laser to zap rock and regolith (broken rock and dust) to study their composition in the resulting vapor. RIMFAX (short for Radar Imager for Mars’ Subsurface Experiment) will use radar waves to probe geological features underground.

2. The rover is landing in a place with a high potential for finding these signs of past microbial life.

Terrain that is interesting to scientists can be challenging to land on. Thanks to new technologies that enable Perseverance to target its landing site more accurately and to autonomously avoid landing hazards, the spacecraft can safely touch down in a place as intriguing as Jezero Crater, a 28-mile-wide (45-kilometer-wide) basin that has steep cliffs, sand dunes, and boulder fields.

More than 3.5 billion years ago, a river there flowed into a body of water about the size of Lake Tahoe, depositing sediments in a fan shape known as a delta. The Perseverance science team believes this ancient river delta and lake deposits could have collected and preserved organic molecules and other potential signs of microbial life.

Context is everything. Mars orbiters have been collecting images and data from Jezero Crater from about 200 miles (322 kilometers) above, but finding signs of ancient life on the surface requires much closer inspection. It requires a rover like Perseverance.

Understanding Mars’ past climate conditions and reading the geological history embedded in its rocks will give scientists a richer sense of what the planet was like in its distant past. Studying the Red Planet’s geology and climate could also give us a sense of why Earth and Mars—despite some early similarities—ended up so different.

4. Perseverance is the first leg of a round trip to Mars.

The verification of ancient life on Mars carries an enormous burden of proof. Perseverance is the first rover to bring a sample caching system to Mars in order to package promising samples for return to Earth by a future mission.

Rather than pulverizing rock the way the drill on NASA’s Curiosity rover does, Perseverance’s drill will cut intact rock cores that are about the size of a piece of chalk and will place them in sample tubes that it will store until the rover reaches an appropriate drop-off location on Mars. The rover could also potentially deliver the samples to a lander that is part of the planned Mars sample return campaign by NASA and ESA (the European Space Agency).

Once the samples are here on Earth, we can examine them with instruments too large and complex to send to Mars, providing far more information about them than even the most sophisticated rover could.

5. Perseverance carries instruments and technology that will help pave the way for human missions to the Moon and Mars.

Perseverance will also have more autonomy on the surface than any other rover, including self-driving smarts that will allow it to cover more ground in a day’s operations with fewer instructions from engineers on Earth. This fast-traverse capability will make exploration of the Moon, Mars, and other celestial bodies more efficient for other vehicles.

In addition, Perseverance carries a technology experiment called MOXIE (short for Mars Oxygen In-Situ Resource Utilization Experiment) that will produce oxygen from Mars’ carbon dioxide atmosphere. It will demonstrate a way that future explorers might produce oxygen for rocket propellant as well as for breathing.

Two other instruments will help engineers design systems for future human explorers to land and survive on Mars: The MEDLI2 (Mars Entry, Descent, and Landing Instrumentation 2) package is a next-generation version of what flew on the Mars Science Laboratory mission that delivered the Curiosity rover, while the MEDA (Mars Environmental Dynamics Analyzer) instrument suite provides information about weather, climate, and surface ultraviolet radiation and dust.

Perseverance is also giving a ride to the Ingenuity Mars Helicopter. A technology experiment separate from the rover’s science mission, Ingenuity will attempt the first powered, controlled aircraft flight at another world. If the helicopter is successful in its 30-Martian-day (31-Earth-day) demonstration window, the data could help future explorations of the Red Planet—including those by astronauts—by adding a new aerial dimension.

6. The Perseverance rover embodies the NASA—and the scientific—spirit of overcoming challenges.

Getting the spacecraft to the launch pad during a pandemic, searching for signs of ancient life, collecting samples, and proving new technologies are no easy feats. Nor is a soft touchdown on Mars: Only about 50% of Martian landing attempts, by any space agency, have been successful.

The mission team draws inspiration from the name of its rover, with particular awareness of the challenges the entire world is experiencing at this time. With that in mind, the mission installed a special plate to honor the dedication and hard work of the medical community and first responders around the globe. The team hopes to inspire the entire world, and future explorers, to forge new paths and make discoveries on which the next generation can build.

7. You will get to ride along.

If all goes well, the public will be able to experience in high-definition what it’s like to land on Mars—and hear the sounds of landing for the first time with an off-the-shelf microphone affixed to the side of the rover. Another microphone on SuperCam will help scientists understand the property of rocks the instrument is examining and can also listen to the wind.

If you are among the 10.9 million people who signed up to send your name to Mars, your name is stenciled on one of three silicon chips embedded on a plate on the rover that carries the words “Explore as one” in Morse code.

Perseverance rover is 100 days out