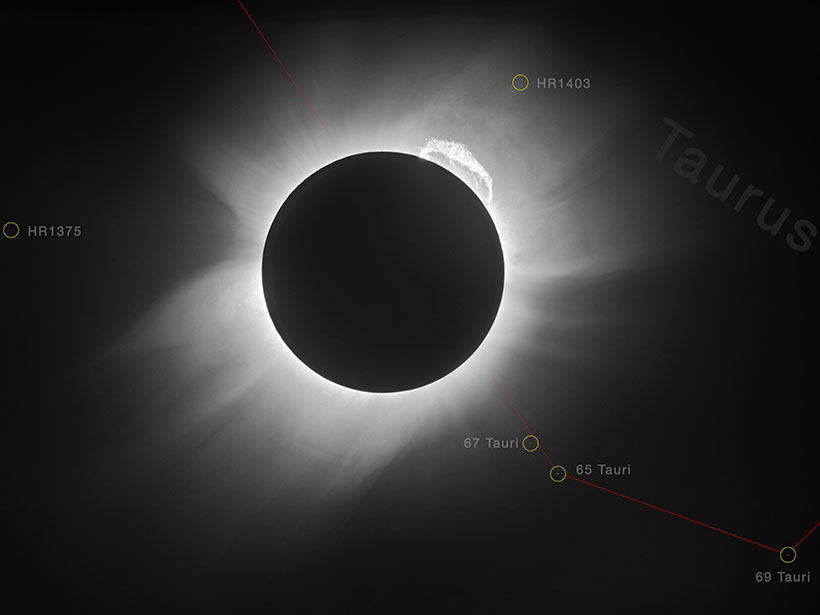 In one of the most famous scientific experiments of the 20th century, Sir Arthur Eddington and others carefully watched the solar eclipse of 29 May 1919. Eddington found that the positions of stars that appeared near the eclipsed Sun seemed to have shifted by a tiny amount. The shifts were consistent with predictions from Albert Einstein’s theory of general relativity, which showed that a massive object warps the space around it and deflects passing light.

In a new study, Fokkema and van den Berg suggest that gravity isn’t the only reason light deflects around the Sun or other massive objects. Such objects also refract passing electromagnetic energy, with the amount of refraction dependent on the frequency of the signal.

“The bending of light close to the Sun is an optical phenomenon,” Fokkema wrote in an email. Until now, “it was explained by the mass of the Sun and the photon character of light. The bending is then caused by a gravitational tension. In the optical realm, the internal refraction index of the Sun should contribute to the bending.”

The researchers compared the propagation of electromagnetic energy using standard ray theory and a new approach based on the theory of geodesics. In the ray model, they say, rays of electromagnetic energy passing near and moving around the Sun or other massive bodies create a “shadow zone.” As a result, “the common straight rays of the standard approach cannot image the curvature of the boundary of an object,” Fokkema wrote.

The geodesic model, which was confirmed using a 3D numerical simulation of the motions of a wave front around a spherical object, eliminates that problem in part by including the refraction index of the Sun and its contrast with the index of the surrounding vacuum. These quantities define the geodetic line, which determines the path of the light ray with greater precision. This model accounts for an additional deflection of light that is frequency dependent and inversely proportional to the third power of distance, so the deflection becomes more significant at closer distances to the lensing object.

In modeling the Sun, the researchers also included a third refractive component introduced by the corona. The combination shows good agreement with historical measurements of actual deflection around the Sun, the researchers say, particularly those made with radio interferometry, which provides the highest-resolution imaging of sources behind the Sun. “We have concluded that these three contributions are essential to explain the deflection along the Sun and other stars,” Fokkema wrote.

Incorporating those contributions could be important to such efforts as the solar gravity lens mission concept, which aims to use the Sun as a gravitational lens to image exoplanets.