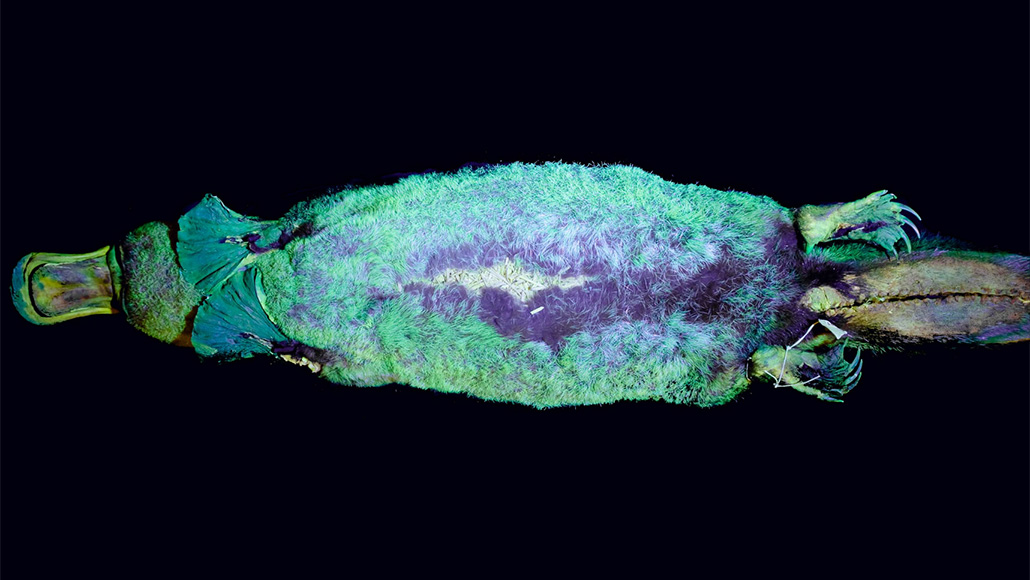 Between the electricity-sensing bill, venomous heel spurs and egg laying, the platypus was already one of the strangest mammals alive today (SN: 5/8/08). Now, researchers have found that this Australian oddity has another unexpected feature: It fluoresces under ultraviolet light.

Platypuses’ dense, waterproof fur absorbs ultraviolet light and emits a blue-green glow, mammologist Paula Spaeth Anichand colleagues discovered somewhat serendipitously. A chance sighting of a fluorescent flying squirrel in the wild had led the researchers to the mammal collection at the Field Museum in Chicago. After examining the museum’s preserved squirrel skins and finding that fluorescence occurred in at least three flying squirrel species, the team decided to examine pelts from marsupials too, as those were the only mammals previously known to possess fluorescent fur. And it just so happened that the drawer of monotremes — an early branch of mammals that, today, is represented only by platypuses (Ornithorhynchus anatinus) and echidnas — was the next one over from marsupials.

“We were curious,” says Anich, of Northland College in Ashland, Wis. “So, we pulled the monotreme drawer, and we shined our [ultraviolet] light on the platypuses. And they were incredibly, vividly fluorescent green and blue.”

To make sure the glow wasn’t something unusual about the Field Museum’s pelts, the team also examined a platypus specimen at the University of Nebraska State Museum in Lincoln. Sure enough, it also glowed, the researchers report online October 15 in Mammalia.

Anich is confident that the glow isn’t an artifact of preservation, because several of the examined squirrel species and the echidna pelts didn’t fluoresce. It’s also likely that the living animals glow like their pelts, she says, as that’s been the case for all other known fluorescent mammals.

“I’m curious to know myself now,” says Josh Griffiths, a wildlife ecologist with the environmental consulting company Cesar in Parkville, Australia, who has been working with platypuses for over a decade. “Next time I’m out trapping, I’ll take a UV light with me and test it out.”

What, if any, purpose this fluorescence may have remains a mystery. Anich’s hunch is that it helps camouflage the mostly nocturnal platypuses from nighttime predators that have UV vision, since, by absorbing some of the UV light, platypuses reflect less of it.

Griffiths isn’t convinced. “Maybe up in northern Queensland, they get chomped by a crocodile every now and then,” he says. “But essentially, they just don’t have any predators.” Instead, he thinks that the glow could be helping the usually solitary animals spot one another or communicate when they do meet up. Something similar is thought to occur in some nocturnal frogs (SN: 4/3/17).

In fact, all known cases of fluorescence in mammals occur in species that are active at night or the low light of dawn and dusk, so Anich thinks the glow has something to do with darkness. “We don’t know as much about the nocturnal world,” she notes, so it’s possible there are lots of other fluorescent mammals awaiting discovery (SN: 2/27/20).

It may even be that the ancestor of all mammals glowed this way. To see this feature in “all three of the major branches” of mammals — placental mammals, marsupials and monotremes — “is really indicative that it is an ancestral trait,” Anich says, and she’d like to see further research explore that possibility.

Evolutionary and ecological significance aside, Griffiths is excited to see if these findings can help biologists who study these shy, elusive animals. “Platypuses are just bloody difficult to study in the wild,” he explains, so perhaps fluorescence will allow researchers to detect these creatures more reliably.

Even if not, the glowing fur certainly adds to platypuses’ reputation for bizarreness. “It’s another weird thing about this weird creature,” he says.