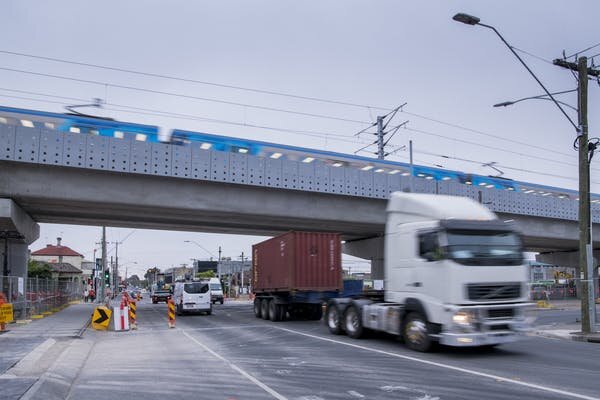 The Victorian government has committed to removing 75 road/rail level crossings across Melbourne by 2025. That’s the fastest rate of removal in the city’s history. The scale of the investment—at least A$14.8 billion—and the project’s ripple effects mean it could do more to transform the city’s public transport system than the Metro Tunnel project.

All infrastructure projects change the determinants of health—the “causes of the causes” of good health—to some extent. Despite this, the public health impacts of the level-crossing removals have been neglected. Our research aims to quantify the health impacts of major infrastructure, using level-crossing removals on the Upfield line as a case study, and to encourage governments to consider these when designing and building.

The two most frequently stated reasons for the project are:

A third reason is to create jobs in the construction sector.

However, the impacts on public health are significant too. The level crossing removals have an opportunity to ensure that changes to the built environment make healthy behaviors the “easy option.” Such changes are generally more effective and equitable and can yield more sustained health benefits than health promotion programs.

This means government investment in health through improvements to the built environment is both an ethical responsibility and a prudent social investment. All infrastructure projects, especially when publicly funded like the level-crossing removals, should contribute to demonstrable and equitable improvements in public health that are proportional to the scale of the investment.

A case study: the Upfield line

Each level-crossing removal in Melbourne has unique challenges and opportunities.

The Bell-to-Moreland project on the Upfield line, for example, involves removing four level crossings and building two new train stations. To remove the crossings, the rail has been elevated to create “sky rail” over a 3km stretch.

The land below can then be re-purposed for linear parks, recreation and active transport such as walking and cycling.

While the government emphasizes such uses, these appear to be incidental reasons for the project. “Level-crossing removal” rather than, say, “rail upgrade” or “linear park project,” suggests its main purpose is to ease traffic congestion.

The problem is that projects that aim to do this often have unintended rebound effects that actually increase car use. This, in turn, is linked to increases in health problems, including inactive lifestyles, excess weight and chronic disease.

The work on the Upfield line has also led to construction noise, the loss of over 150 mature trees and heritage structures, and loss of cyclists’ serendipitous “greenwave,” whereby north-south cycle travel on the adjacent path could be coordinated with the boom gates. Community dissatisfaction with the consultation processes has also been significant.

Each of these problems is known to make health worse. Will the benefits of the new open spaces—”two MCGs worth“—and better transport interchanges at the new Moreland and Coburg stations be realized and outweigh the negative impacts? How can we be sure major infrastructure, like the Upfield level-crossing removal, represents a prudent investment in public health?

Making the links between liveability and health

Health impact assessment is an established set of protocols for measuring the effects of a project on public health. Extensive consultation and modeling are used to understand the opportunities and threats to public health arising from a proposed project.

At the same time, liveability is increasingly mentioned in urban policies and plans. The term is often used to promote Melbourne to the world.

However, liveability is not consistently defined. And contrary to what many would assume, the term is often used to emphasize city image and global economic competitiveness, rather than equitable access to healthy urban environments.

Melanie Lowe and colleagues recognized the potential for liveability to be redefined and used to improve decision-making for health equity. Their review of 82 peer-reviewed papers and government reports examined how these have used the concept. They found a liveable place, irrespective of its global location, is: “[…] safe, attractive, socially cohesive and inclusive, and environmentally sustainable, with affordable and diverse housing linked to employment, education, public open space, local shops, health and community services, and leisure and cultural opportunities; via convenient public transport, walking and cycling infrastructure.”

Initial research for a comprehensive health impact assessment has shown the Upfield level-crossing removal will affect most of these elements of liveability to some degree. Some impacts will be positive, some negative. Transport, public open space, natural environment, social cohesion and local democracy are likely to be most affected.

These findings illustrate the pervasive yet subtle impacts on public health that major infrastructure projects can have.

Closer examination of the Upfield project will involve gathering data and modeling the impacts on health. The results will provide valuable evidence for formulating recommendations that enhance the public health benefits of this project and others like it, locally and internationally.

Importantly, demonstrating the links between major infrastructure, liveability and the determinants of health will help ensure decision-makers understand the public health potential and risks of such publicly funded projects.

Citation:
Level-crossing removals: A case study in why major projects must also be investments in health (2021, January 22)
retrieved 22 January 2021
from https://phys.org/news/2021-01-level-crossing-case-major-investments-health.html