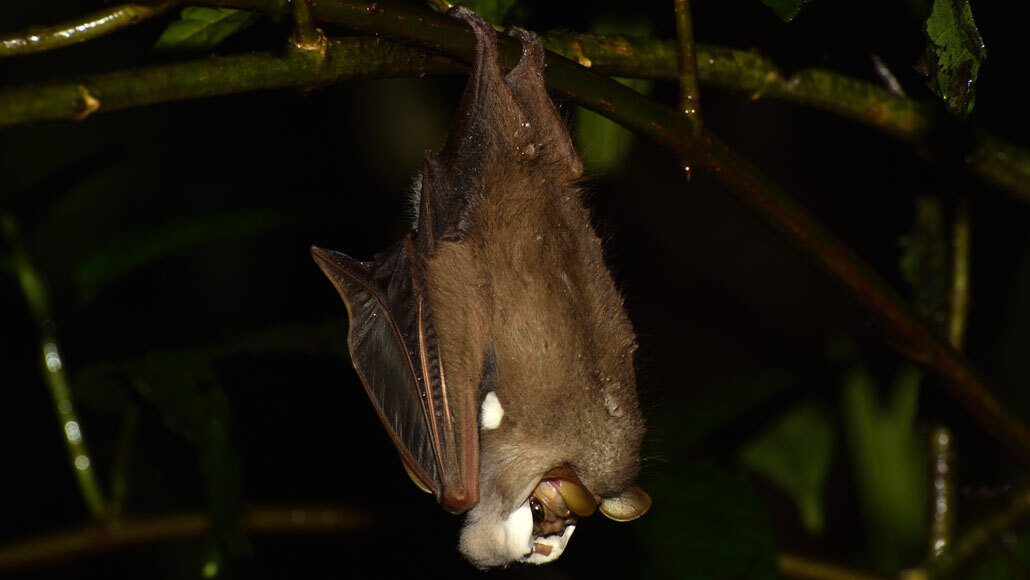 For tips on how to flirt while wearing a mask, take notes from nature’s experts: male wrinkle-faced bats. The first video of a wrinkle-faced sexual encounter shows a male covering his face with a masklike flap of skin while wooing and then, at a strategic moment, dropping the mask.

Even the basics of how bats mate — whether a male stakes out territory and advertises, or females just shop among a crowd of show-offs — remain a mystery in more than 90 percent of the world’s 1,400 bat species, says mammologist Bernal Rodríguez-Herrera of the University of Costa Rica in San José. So it was a stroke of luck when a tip from nature guides in 2018 led him to the first scientific observations of courtship in one of the more elusive bats in the Western hemisphere’s tropics, the wrinkle-faced bat, Centurio senex.

Males, but not females, grow loose folds of mostly white fur below the chin that look like a pulled-down neck gaiter. A male can use his skinny thumbs to tug the fur flap up over his chin and mouth.

It doesn’t seem likely that only males would need covers for chilly chins. Single-sex excesses often are for showing off, like peacock feathers fanned out in competition for female favor (SN: 6/16/15). Now a lucky first look at wrinkle-faced courtship suggests that the masks somehow play into a wooing competition, Rodríguez-Herrera and colleagues report November 11 in PLOS ONE.

For weeks, researchers watched male bats convene in the forest from about 6 p.m. until midnight, hanging upside down in particular spots with their masks on. Other bats occasionally flapped close briefly, but researchers couldn’t tell why.

The dangling males, it turned out, were singing. Human hearing picks up lots of tropical night sounds, such as the calls of frogs and owls, but not bats. Bat-recording instruments, however, revealed a great roaring ultrasonic bat songs. The sounds dipped into the range of human hearing only when a flyby visitor made a quick intrusion. The males also “move the tips of the wings, constantly,” he says. He can’t tell if the wing rustling contributes any sound, but “we think it’s part of the courtship display.”

Seeing males gather in a specific place to sing suggests to Rodríguez-Herrera that the wrinkle-nosed species takes a singles bar approach to mating, so far rarely reported among bats. More scientifically known as lekking, males cluster and display while females shop for a contributor of genes to the next generation. Help raising the resulting offspring is not on offer.

For weeks, these male bats in Costa Rica spent evenings rubbing wings and singing upside down. The pale mask might work as a visual lure in dim light or might play a role in wafting scents, a romantic feature in some other bats’ courtships. Or maybe the flap “helps sound resonance,” Rodríguez-Herrera muses. “We do not know.”

What the researchers finally saw was one wrinkle-nosed mating. A female landed on a male’s perch. The two faced each other briefly. And as he repositioned himself for intimate contact, his mask went down.