Iceland’s landscape has been shaped by dramatic forces over 30 million years. Its formation and ongoing evolution offers a masterclass in geophysical processes. Iceland: Tectonics, Volcanics, and Glacial Features, a book recently published by AGU, presents a comprehensive regional guide to the landscape of this unique island. We asked the author of the book some questions about why she finds Iceland such a special place to visit and study, and asked her to explain how the book will help both experienced and novice geologists navigate around the landscape.

What makes Iceland so interesting for geologists?

Iceland is a dynamic place where the power and beauty of geology can be witnessed at every turn. It is a geologically young island – less than 33 million years old – and its majestic landscapes are shaped by active plate tectonics, volcanics, and glacial movement. It is one of the only places in the world where a divergent plate boundary is exposed at the Earth’s surface! Furthermore, with 33 active volcanoes, the vast majority of all volcanic features found on Earth can be seen on an island the size of Kentucky or Switzerland.

What are some of the most interesting lines of research as scientists seek to understand Iceland’s ongoing evolution?

There are a few ongoing geological debates; here are just three. First, geologists continue to question how an island on a divergent plate boundary can have both silica-poor (felsic) magma and silica-rich (mafic) magma sources.

Second, a volcano on the southern coast, called Katla, has been dormant for more than 100 years. Historically known for its catastrophic eruptions, the intensity of the next eruption is of great concern to volcanologists, especially since its smaller neighbor, Eyjafjallajokull, erupted in 2010 producing an ash cloud that grounded 10,000 international flights between Europe and North America.

Third, geologists remain curious as to the effects of a warming climate on the island’s overall volcanism. As glacial ice melts and the basement rock uplifts, will that reduction in pressure allow for magma to more easily flow toward the surface?

In 2006 I was charged with the idea of starting a study abroad program at my institution, and Iceland was the first place that came to mind. Back then, it was still off the radar of most tourists, but I convinced my big brother to go with me for an initial site assessment. With the keys to a Toyota Yaris and a series of paper road maps, we circled the island in 11 days. Although we were perpetually lost, we found a pristine landscape with amazing views, incredible geology and few road signs. I was hooked.

Over the course of the next decade I visited nearly every summer, bringing with me fortunate students who could keep up with the hiking, as well as my desire to explore everything about the island–including eating fermented shark meat, the national dish.

With the later advancement of GPS technology, and a newly acquired husband who has an amazing sense of direction, I have been able to traverse even the most remote parts of the country.

What is your favorite geological spot in Iceland and why?

I would pick the bridge between the Eurasian Plate and North American Plate, located on the Reykjanes Peninsula. For me, this is a place where the theory of plate tectonics shifts from being a diagram to something tangible – and spectacular! Standing at the bottom of the rift valley while being shadowed by the fault walls of the divergent plate boundary is an unspeakable feeling. This is one of my favorite places to bring students because there is always a “light-bulb moment” when these 101 concepts click after seeing them firsthand.

How does your book help visitors to understand the island?

This book is distinct from other literature written about Iceland as it provides a single, well-organized resource for learning about the geology of the island. I drew on the most up-to-date peer-reviewed scientific literature but tried to summarize it accessibly, so that the reader can appreciate the interesting, and sometimes debated, geological theories regarding an island splitting in half due to plate tectonic motion.

This text is not just intended for academics, but also for novice geologists who want to understand the magnificent scenery at a deeper level. To encourage this, I provide information on foundational geological concepts and a glossary, as well as figures and diagrams to explain concepts and processes.

The book has been organized by region with travelers in mind. It highlights Iceland’s most popular natural landscape destinations while also putting each region into a contextual perspective. For easy reference, there are GPS coordinates for most locations mentioned in the text.

I hope to have both captured the island’s natural beauty and provided scientific context for the relationships between structure, process, and time in the island’s evolution.

What is your top advice for someone planning a trip to Iceland? 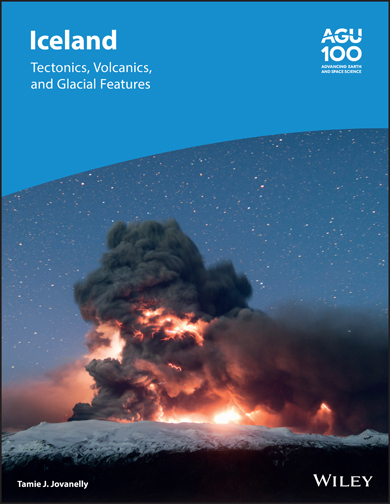 Iceland is a fairly expensive place to visit due to the high cost of food, transport, and accommodation, but it is possible to travel more cheaply.

For example, before you depart for Iceland, purchase a flexible bus pass that will allow you to hop on and off at any destination for a month.

Consider camping: you can purchase a camping pass that allows you to pitch a tent at any designated campsite around the island. Although they vary widely in amenities, they usually have running water and some sort of a shelter.

Also, be sure to stock up with supplies at the BONUS supermarket before you depart the capital city of Reykjavik.

As an alternative to a self-guided trip, you could join one of my guided tours. I decided to set up my own company, Iceland Geology Tours, to offer tours to people interested in learning about the formation of Iceland and its landscapes. The tours are suitable whether people are scientists or not.

Editor’s Note: It is the policy of AGU Publications to invite the authors or editors of newly published books to write a summary for Eos Editors’ Vox.