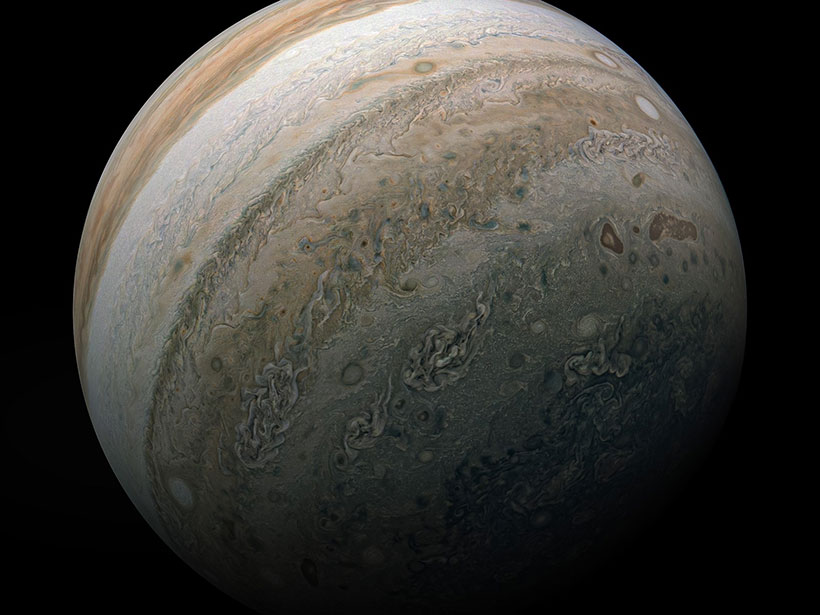 Jupiter creates the solar system’s most powerful planetary magnetic field, and understanding its region of influence, called the magnetosphere, is vital to nearly all observations of the Jovian system. The first estimates of Jupiter’s magnetosphere were developed in anticipation of the first spacecraft flybys in the 1970s. The 1979 visits by the dual Voyager spacecraft provided data sufficient to construct a robust empirical model of the magnetosphere within 30 Jovian radii (RJ) of the planet.

The Voyager model, which represents Jupiter’s magnetospheric configuration with a disklike geometry, remains in use today. However, the arrival of NASA’s Juno spacecraft in 2016, which provided highly detailed measurements of Jupiter’s plasma environment, revealed discrepancies in that model. Connerney et al. extend the Voyager model and refit it to Juno observations to improve mission planning and data interpretation. The result is a model that empirically describes the magnetosphere without attempting to explain the physical processes that produce it.

The authors fit the Voyager model with all high-resolution Juno magnetic field data collected within 30 RJ on Juno’s first 24 polar orbits. That model relies on an axisymmetric current sheet that encircles Jupiter, with azimuthal currents confined to a washer-shaped region near the magnetic equator. The researchers augmented this system of azimuthal currents with another system of radial currents that flow outward from the inner edge of the disk. The resulting best fit model describes the magnetosphere as a slightly inclined disk with a total thickness of 7.2 RJ, an inner radius of 7.8 RJ, and an outer radius of 51.4 RJ.

This Juno-based model was evaluated through observations of charged particle interactions with Jupiter’s large moons and was found to substantially outperform the Voyager era one. The authors also examined orbit-to-orbit variations in the modeled current sheets; the azimuthal current appears to remain steady, whereas the radial current shows larger change. This variation may indicate activity in the magnetosphere, the researchers noted, and may be useful in interpreting Jupiter’s aurorae. (Journal of Geophysical Research: Space Physics, https://doi.org/10.1029/2020JA028138, 2020)