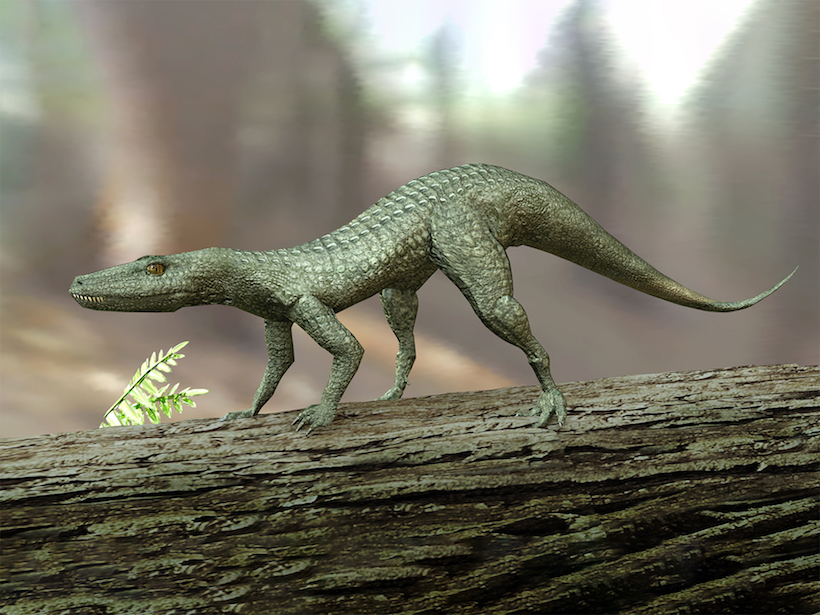 Massive volcanic eruptions followed by climate change, widespread extinction, and, eventually, the emergence of new life forms. It sounds like the story of one of Earth’s five great mass extinctions.

Unlike some of the more dramatic mass extinctions, the signature of the CPE is difficult to trace. But working across disciplines and continents, a team of scientists has been able to piece together a broad overview, showing that it was a period of rapid biological turnover on a global scale.

The accumulated evidence, including results of a new fossil analysis, shows that the CPE was a major extinction event. More than that, however, the evidence indicates it was a period of new beginnings. Most notably, the CPE marks the start of the dinosaurs’ ascendence to ubiquity and ecological dominance.

Ecologically, researchers say, the Carnian extinction marks the “dawn of the modern world.” The new study appeared online in September in Science Advances.

The CPE is named for the stage of the Late Triassic in which it occurred—the Carnian—and for its signature feature: rain. A lot of rain, in four main pulses lasting over a million years, fell across much of the supercontinent of Pangaea.

Intense rains, global warming, and probably widespread ocean anoxia and acidification resulted in the extinction of one third of all marine species during the Carnian.

The rains were accompanied by global warming and probably widespread ocean anoxia and acidification, researchers say. All told, their analysis shows that these factors resulted in the extinction of one third of all marine species. Ecosystems on land also underwent massive transformations during and after the CPE, including the loss of dominant plant and herbivore species.

Study coauthor Mike Benton, a professor of vertebrate paleontology at the University of Bristol in the United Kingdom, said one of the team’s goals was to determine the ranking of the Carnian event among other mass extinctions. “It appears not as substantial as the ‘big five,’ but not far off, and with proper analysis in future it might turn out to be of similar magnitude,” he said.

It was an ill-timed disaster for a planet still only very slowly recovering from the biggest mass extinction of them all, at the end of the Permian period just 20 million years earlier. “The end-Permian extinction wiped out 95% of all marine species, and the Triassic was a time of recovery,” Benton noted. “It now seems the CPE was a key punctuation [in that process].”

“A key feature of the CPE is that extinction was very rapidly followed by a big radiation,” said lead author Jacopo Dal Corso, a geology professor at the China University of Geosciences in Wuhan. “A number of groups that have a central role in today’s ecosystems appeared or diversified for the first time in the Carnian.”

Benton notes that this period saw “the rise of modern reefs and plankton in the oceans and the rise of modern tetrapod groups, including frogs, lizards, turtles, crocodilians, dinosaurs, and mammals…along with some important plant groups such as conifers, and some new groups of insects.”  All of this innovation, he says, forms much of the basis of modern ecosystems. “Even the dinosaurs, as birds, are part of our modern fauna.”

Gerta Keller, a geology professor at Princeton University who was not part of the study, said the work sheds new light on “one of the least known and underrated mass extinction events. I congratulate the authors for placing the Carnian extinction on the map with the other five big mass extinctions, among which it may eventually take its place after further investigations.”

Other mass extinctions are known to have been caused by climate change initiated by volcanism, and researchers say the same is probably true for the Carnian. During this time a series of enormous eruptions occurred in Wrangellia, then an equatorial island region off the coast of Pangaea. The Wrangellia basaltic accretions now form a substantial part of western Canada.

Researchers estimate Wrangellia volcanism produced more than a million cubic kilometers of basalts—but that may be an underestimate since much of the volcanic rock has since been subducted. Researchers think that this release was the trigger for the climatic and biological changes of the CPE.

The new study is the first comprehensive review of the timing and global impact of the Wrangellia eruptions and their probable link to the climate episode and mass extinction. The work draws on studies from geological, paleontological, and climatological literature conducted in Europe, China, and South America. To this the researchers added a new analysis of two large fossil databases representing thousands of collections to demonstrate the magnitude of extinction and origination associated with the CPE.

“In our review we were able, through a long work of synthesis and revision of available information, to show with a high resolution the synchroneity between biological and environmental changes we observe in the rocks of 233 million years ago,” Dal Corso said.

The scientists say much work remains to more precisely uncover the scope of the Carnian extinction, its link to the Wrangellia eruptions, and possibly other volcanic events.  They hope the new review will help bring the CPE to the attention of a broader research community.

“Until now,” Dal Corso says, “the Carnian Pluvial Episode has been the research topic of a very small community of scientists. I think that many people were unaware of it or of its importance.”