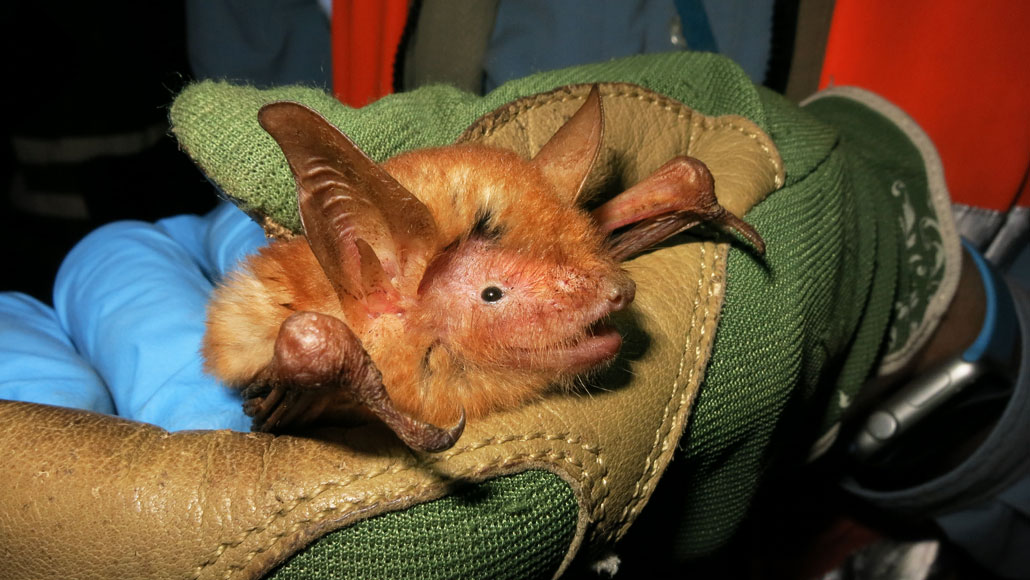 Bats, better known for their mousy looks, can have a colorful side. A new species, discovered when two bats were caught at an abandoned miners’ tunnel in western Africa, sports showy swathes of orange fur.

But that’s not what sets this bat apart: Three other Myotis species from the continent are similarly flashy. Rather less visible traits, from details of hidden striping in its fur to its echolocation calls, peg Myotis nimbaensis as something unusual, Simmons and colleagues report online January 13 in American Museum Novitates.

The new species was discovered the old-fashioned way — out in a remote forest at night with keen eyes studying real animals. That’s not so common nowadays in the age of sensitive genetic tools, Simmons says. Many of the 20 or so new bat species typically named every year are detected through genetic analyses of museum specimen lookalikes. M. nimbaensis differs genetically from near kin — about as much as humans differ from gorillas. Differences also show up in teeth as well as other anatomy.

But when researchers collected the first bat, near the mouth of an abandoned tunnel for mineral exploration up in Guinea’s section of the Nimba Mountains, the flashy beast wasn’t obviously anything new. While most of the more than 1,400 known kinds of bats are various shades of brown, bats here and there around the world can be yellow, fluffball white or coppery red. And there was the matter of the three other orange Myotis species. (How, or whether, the colors matter in animals active at night, Simmons says, is “one of the mysteries.”)

One way to tell the new species apart is from the proportions of secret stripes on the individual hairs in orange fur patches. In the newly named bats, the bottom third of each orange hair is black. Then comes a creamy white middle third before the hair turns pumpkin at the tip.

Bakwo Fils worries about the fragility of sky islands and the newfound bats’ future. Small animals flitting in the dark rarely get the conservation attention that large charismatic African wildlife does. Yet we depend on various little half-seen bats streaking in the dark to catch insects, pollinate plants, spread seeds and help with other chores that keep our ecosystems going.