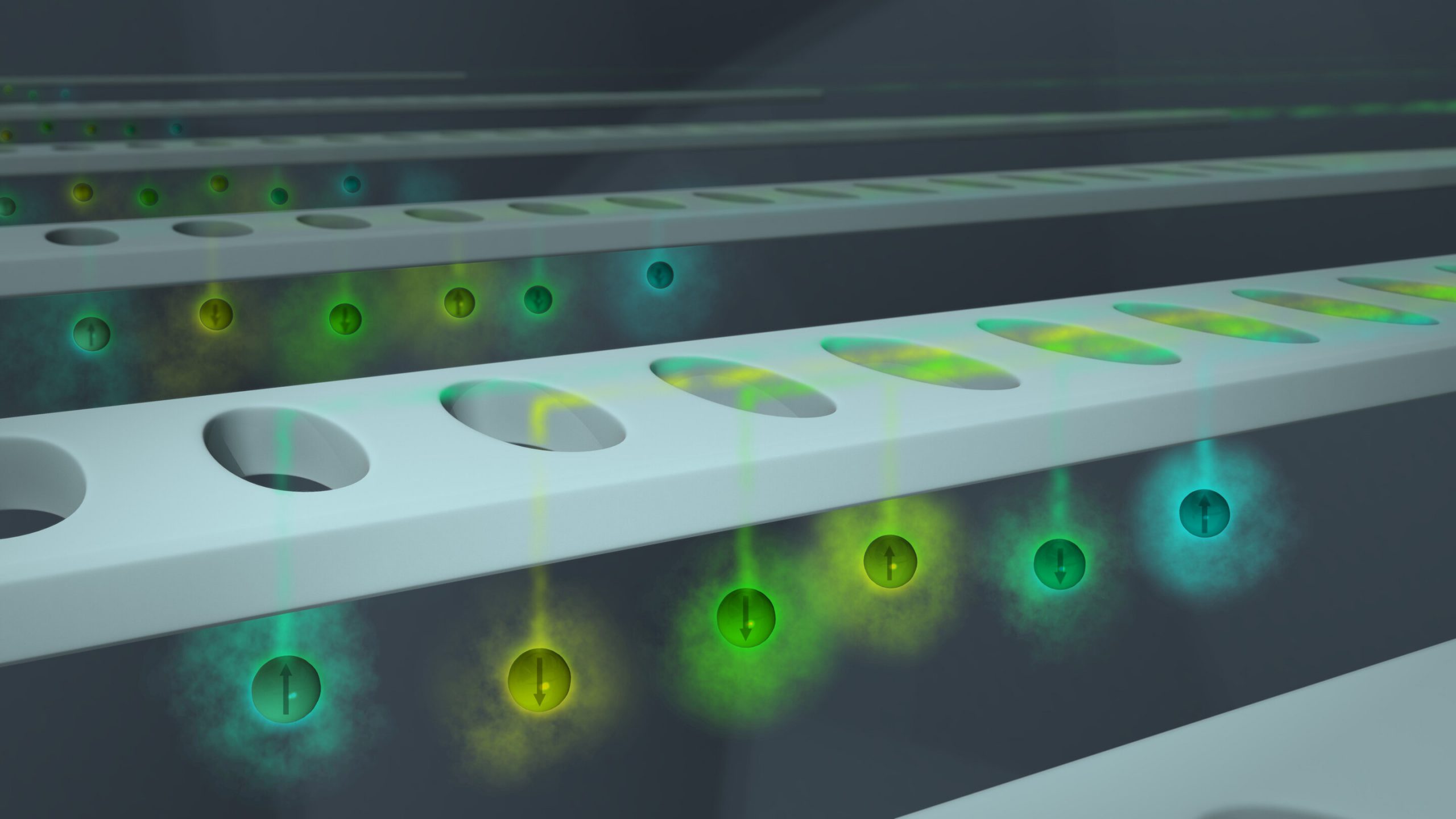 When atoms get extremely close, they develop intriguing interactions that could be harnessed to create new generations of computing and other technologies. These interactions in the realm of quantum physics have proven difficult to study experimentally due the basic limitations of optical microscopes.

Now a team of Princeton researchers, led by Jeff Thompson, an assistant professor of electrical engineering, has developed a new way to control and measure atoms that are so close together no optical lens can distinguish them.

Described in an article published Oct. 30 in the journal Science, their method excites closely-spaced erbium atoms in a crystal using a finely tuned laser in a nanometer-scale optical circuit. The researchers take advantage of the fact that each atom responds to slightly different frequencies, or colors, of laser light, allowing the researchers to resolve and control multiple atoms, without relying on their spatial information.

In a conventional microscope, the space between two atoms effectively disappears when their separation is below a key distance called the diffraction limit, which is roughly equal to the light’s wavelength. This is analogous to two distant stars that appear as a single point of light in the night sky. However, this is also the scale at which atoms start to interact and give rise to rich and interesting quantum mechanical behavior.

“We always wonder, at the most fundamental level—inside solids, inside crystals—what do atoms actually do? How do they interact?” said physicist Andrei Faraon, a professor at the California Institute of Technology who was not involved in the research. “This [paper] opens the window to study atoms that are in very, very close proximity.”

Studying atoms and their interactions at tiny distances allows scientists to explore and control a quantum property known as spin. As a form of momentum, spin is usually described as being either up or down (or both, but that’s another story). When the distance between two atoms grows vanishingly small—mere billionths of a meter—the spin of one exerts influence over the spin of the other, and vice versa. As spins interact in this realm, they can become entangled, a term scientists use to describe two or more particles that are inextricably linked. Entangled particles behave as if they share one existence, no matter how far apart they later become. Entanglement is the essential phenomenon that separates quantum mechanics from the classical world, and it’s at the center of the vision for quantum technologies. The new Princeton device is a stepping stone for scientists to study these spin interactions with unprecedented clarity.

One important feature of the new Princeton device is its potential to address hundreds of atoms at a time, providing a rich quantum laboratory in which to gather empirical data. It’s a boon for physicists who hope to unlock reality’s deepest mysteries, including the spooky nature of entanglement.

Such inquiry is not merely esoteric. Over the past three decades, engineers have sought to use quantum phenomena to create complex technologies for information processing and communication, from the logical building blocks of emerging quantum computers, capable of solving otherwise impossible problems, to ultrasecure communication methods that can link machines into an unhackable quantum Internet. To develop these systems further, scientists will need to entangle particles reliably and exploit their entanglement to encode and process information.

Thompson’s team saw an opportunity in erbium. Traditionally used in lasers and magnets, erbium was not widely explored for use in quantum systems because it is difficult to observe, according to the researchers. The team made a breakthrough in 2018, developing a way to enhance the light emitted by these atoms, and to detect that signal extremely efficiently. Now they’ve shown they can do it all en masse.

When the laser illuminates the atoms, it excites them just enough for them to emit a faint light at a unique frequency, but delicately enough to preserve and read out the atoms’ spins. These frequencies change ever so subtly according to the atoms’ different states, so that “up” has one frequency and “down” has another, and each individual atom has its own pair of frequencies.

“If you have an ensemble of these qubits, they all emit light at very slightly different frequencies. And so by tuning the laser carefully to the frequency of one or the frequency of the other, we can address them, even though we have no ability to spatially resolve them,” Thompson said. “Each atom sees all of the light, but they only listen to the frequency they’re tuned to.”

The light’s frequency is then a perfect proxy for the spin. Switching the spins up and down gives researchers a way to make calculations. It’s akin to transistors that are either on or off in a classical computer, giving rise to the zeroes and ones of our digital world.

To form the basis of a useful quantum processor, these qubits will need to go a step further.

“The strength of the interaction is related to the distance between the two spins,” said Songtao Chen, a postdoctoral researcher in Thompson’s lab and one of the paper’s two lead authors. “We want to make them close so we can have this mutual interaction, and use this interaction to create a quantum logic gate.”

A quantum logic gate requires two or more entangled qubits, making it capable of performing uniquely quantum operations, such as computing the folding patterns of proteins or routing information on the quantum internet.

Thompson, who holds a leadership position at the U.S. Department of Energy’s new $115M quantum science initiative, is on a mission to bring these qubits to heel. Within the materials thrust of the Co-Design Center for Quantum Advantage, he leads the sub- qubits for computing and networking.

His erbium system, a new kind of qubit that is especially useful in networking applications, can operate using the existing telecommunications infrastructure, sending signals in the form of encoded light over silicon devices and optical fibers. These two properties give erbium an industrial edge over today’s most advanced solid-state qubits, which transmit information through visible light wavelengths that don’t work well with optical-fiber communication networks.

Still, to operate at scale, the erbium system will need to be further engineered.

While the team can control and measure the spin state of its qubits no matter how close they get, and use optical structures to produce high-fidelity measurement, they can’t yet arrange the qubits as needed to form two-qubit gates. To do that, engineers will need to find a different material to host the erbium atoms. The study was designed with this future improvement in mind.

“One of the major advantages of the way we have done this experiment is that it has nothing to do with what host the erbium sits in,” said Mouktik Raha, a sixth-year graduate student in electrical engineering and one of the paper’s two lead authors. “As long as you can put erbium inside it and it doesn’t jitter around, you’re good to go.”