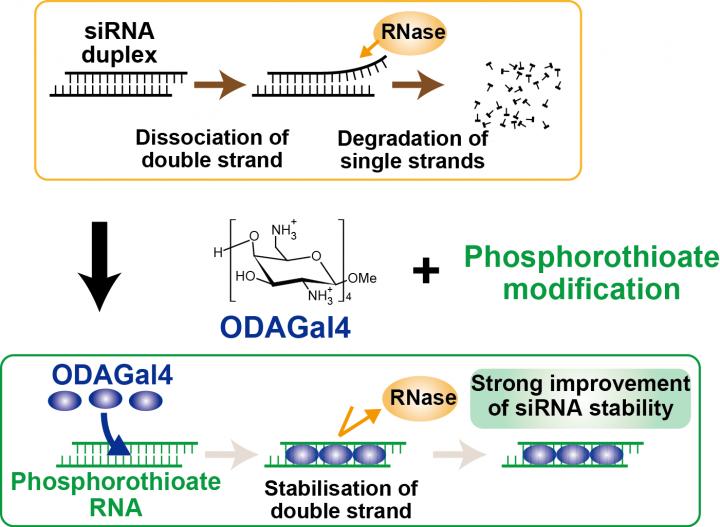 RNA interference is a gene regulatory mechanism in which the expression of specific genes is downregulated by endogenous microRNAs or by small interfering RNAs (siRNAs). Although siRNAs have broad potential for gene-silencing therapy, their instability is one of the difficulties to develop siRNA-based agents. To improve their stability, most of the developed siRNA-based drugs are chemically modified in their nucleotides or phosphodiester linkages. However, chemical modification is not a perfect strategy for siRNA stabilisation because extensive modification may interrupt the gene-silencing activity of siRNAs and also induce cytotoxicity.

siRNAs consist of oligonucleotide duplexes of 21-23 bases and form an A-form helix structure in which the major grooves have highly negative potential, therefore cationic molecules that can bind to the major grooves are expected to stabilise the RNA duplexes and protect them against cleavage in the body fluid. Based on this idea, organic chemists at Tokyo University of Science have recently synthesised an artificial cationic oligosaccharide, oligodiaminogalactose 4mer (ODAGal4), that can preferentially bind to the major grooves of RNA duplexes for siRNA stabilisation (Iwata, RI. et al. Org. Biomol. Chem. https://doi.org/10.1039/c6ob02690g (2017)).

Now, Atsushi Irie and his colleague at Tokyo Metropolitan Institute of Medical Science in collaboration with the team at Tokyo University of Science have developed a new strategy for siRNA stabilisation using ODAGal4 combined with phosphorothioate modification of RNAs. In the study published online on 9th September in the Scientific Reports, the researchers have proved that ODAGal4 strongly enhances biological and thermal stability of siRNAs in vitro.

The researchers show that ODAGal4 has several unique characteristics for stabilising siRNAs. Firstly, ODAGal4 can improve stability of various siRNAs independent of nucleotide sequence because ODAGal4 binds to phosphodiester linkages of RNA duplexes but not to nucleobases of the nucleotides. In addition, importantly, ODAGal4 does not compromise gene-silencing activity of any siRNAs. This character of ODAGal4 is in sharp contrast to those of known chemical modifications, which may interrupt gene-silencing activity of siRNAs. ODAGal4, therefore, has great potential for siRNA stabilisation, being widely applicable to various siRNA-based drugs.

Secondly, the effect of ODAGal4 on siRNA stabilisation is further enhanced by chemical modification of the siRNAs; in particularly, ODAGal4 prominently improves stability of RNAs with phosphorothioate linkages. This improvement in siRNA stability is superior to that observed for other chemical modifications (e.g., 2′-O-methyl, locked nucleic acid and 2′-deoxy-2′-fluoro nucleotides) suggesting that ODAGal4 combined with phosphorothioate modification is highly effective for stabilising siRNAs.

Lastly, another striking property of ODAGal4 is its binding specificity to RNA duplexes; ODAGal4 binds to A-form RNA helix but not to B-form DNA helix nor to single-stranded RNA/DNA. Although various gene delivery systems consisting of cationic polymers have been developed to stabilise nucleotides, the molecular structures of the polymers are not designed to specifically bind to nucleotides. The binding of the polymers to nucleotides relies on the ionic interaction between them, and thereby the polycation complexes are prone to induce cytotoxicity due to nonspecific binding of the polymers to other biomolecules. In marked contrast, ODAGal4 escapes from causing cytotoxicity because of its restricted binding with high affinity to RNA duplexes.

“Our goal will be application of ODAGal4 for siRNA-based agents. Although we should study in vivo experiments to confirm and expand our findings, we emphasise that ODAGal4 has a great advantage as improving siRNA stability and has a potential for reducing total dose and frequency of administration of siRNA-based drugs in future application,” concludes Atsushi Irie.

Other researchers who contributed to this study include Kazuki Sato, Rintaro Iwata Hara and Takeshi Wada, all of Tokyo University of Science; and Futoshi Shibasaki, of Tokyo Metropolitan Institute of Medical Science.

This work was supported by JSPS KAKENHI Grant.