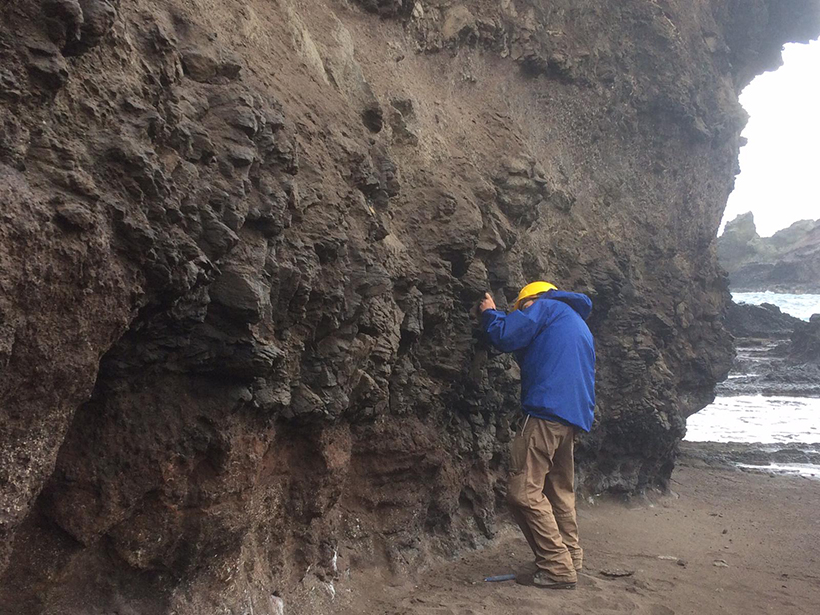 North is north, until it isn’t. Earth’s magnetic field has repeatedly reversed itself, with magnetic north sometimes residing closer to today’s South Pole and vice versa. The time between these global-scale swaps has ranged from tens of thousands to millions of years, and the frequency of reversals may be linked to processes in the deep Earth, where changes in mantle convection can influence the distribution of heat at the core-mantle boundary.

How the mantle moves affects the geodynamo, the swirling mass of iron-rich fluid in Earth’s outer core that generates the geomagnetic field, said Courtney Sprain, a paleomagnetist at the University of Florida.

But determining the rate at which the magnetic poles reversed before about 160 million years ago poses myriad difficulties. In new research, Sprain and her colleagues argue that when looking in the deep past, one proxy for reversal frequency—magnetic field strength—stands above others and can tell scientists whether the poles flipped back and forth rapidly or remained steadfast for millions of years at a time. The team will present results of their work on 15 December at AGU’s Fall Meeting 2020.

Rocks on the Continent Versus Stripes on the Seafloor

The seafloor “stripes” formed by rocks with alternating alignments meticulously record at least several hundred flips of the magnetic field dating as far back as approximately 160 million to 170 million years ago.

Deep beneath the ocean surface, lava continuously erupts from mid-ocean ridges. Iron-rich minerals within the molten rock orient themselves with the geomagnetic field like tiny compasses pointing north. The lava cools rapidly in the frigid water, preserving these alignments. If the poles swap, magnetic minerals in the next batch of erupting lava will point in the opposite direction. Today, the seafloor “stripes” formed by rocks with alternating alignments meticulously record at least several hundred flips dating as far back as the seafloor’s ledger reaches—approximately 160 million to 170 million years ago, according to Sprain.

The seafloor also documents our geodynamo’s peculiar antics, like the Cretaceous Normal Superchron, which spanned approximately 84 million to 124 million years ago. For nearly 40 million years, magnetic north (corresponding to today’s north) was remarkably stable, said Sprain. In stark contrast with this period of stability, she said, parts of the Jurassic seafloor record a mind-boggling 10 to 12 reversals per million years, or about once every hundred thousand years or less.

To stretch the paleomagnetic record beyond what’s shown by the magnetic signatures locked into the ocean floor, paleomagnetists scour continents for ancient, undisturbed sedimentary and volcanic rocks, said Maggie Avery, a paleomagnetist at the University of California, Berkeley, who was not affiliated with Sprain’s work. If you want to know the orientation and field strength of Earth’s magnetic field at a certain time in the past, metamorphic rocks won’t work, Avery explained, because the original magnetic signatures recorded when the rocks formed have been altered by high heat, pressure, or other processes. And the further back in time you look, she said, “it gets more difficult to find really old rocks that haven’t been metamorphosed.”

Even in pristine Precambrian rocks, measuring reversals proves tricky because as the continents wandered, they occasionally straddled, or even crossed, the equator. These tropical jaunts masquerade as reversals in paleomagnetic records, said Sprain. Because of this sometimes confusing and patchy record, she said, piecing together Earth’s history of magnetic reversals to calculate reversal rates is difficult.

At the 2017 Nordic Paleomagnetic Workshop in Leirubakki, Iceland, a team of scientists began collating paleomagnetic data for the Cretaceous and Jurassic—those curious times of stability versus wildly rapid reversals. With these data, they explored whether two reversal rate proxies—paleosecular variation and magnetic field strength—correlated with reversal frequency.

However, the paleomagnetic data studied for both the Cretaceous and Jurassic come from only about 20 localities around the world, and “20 is very few data points when you’re looking at a global distribution,” said Sprain. To assess whether the spatial distribution of available data could bias results with respect to either proxy, she and her coauthors studied simulations of Earth’s geodynamo that rely on magnetohydrodynamic equations. In these simulations, researchers can calculate a synthetic magnetic field for any given location on Earth’s surface. These kinds of calculations “have an advantage [in that the] magnetic field is solved everywhere,” she explained. “We know what the magnetic field should look like.”

Sprain and her colleagues sampled each simulation at 253 locations distributed uniformly across the globe. Then they downsampled each simulation, selecting only localities at which real data are available to mimic the paleomagnetic data set previously studied. This selection reduces the number of synthetic data points from 253 to 20, but because the smaller subset derives from the full data set, each approach “should give us the same numbers,” said Sprain. When they don’t, she said, bias introduced by the spatial distribution of the data is the culprit.

It seems “we should all be studying paleointensity” to reveal past magnetic reversal rates, said Avery. And if paleosecular variation isn’t correlated with reversal rate and field intensity, as the new results suggest, that may also be an important observation, she said. “Maybe it’s telling us something cool about how Earth’s dynamo works.”