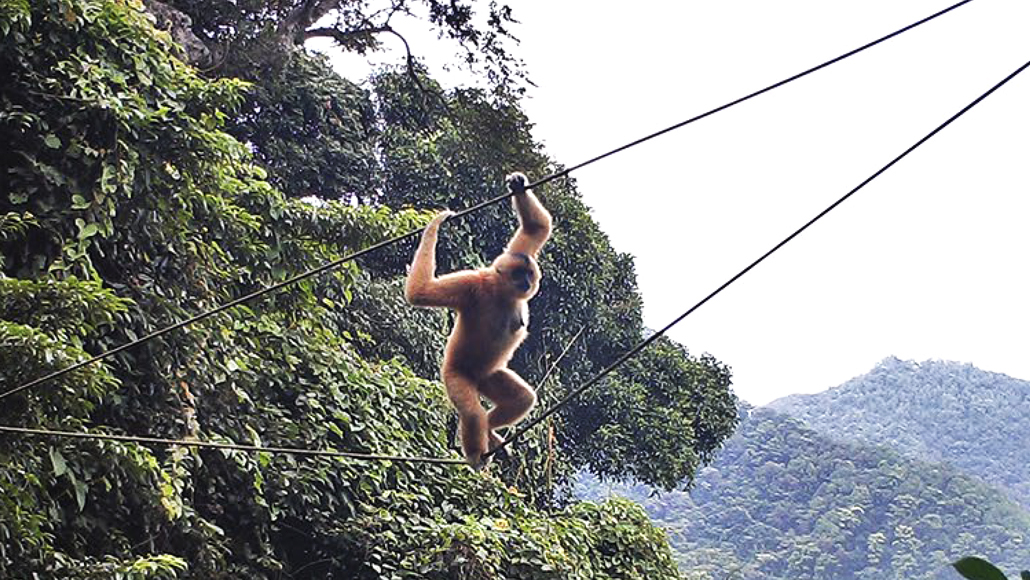 With acrobatic leaps, Hainan gibbons can cross a great gully carved by a 2014 landslide in the forest on China’s Hainan Island. But when a palm frond caught by the vaulting apes to steady their landing started to sag, researchers rushed to provide a safer route across.

Though slow to adopt it, the gibbons increasingly traveled a bridge made of two ropes that was installed across the 15-meter gap, researchers report October 15 in Scientific Reports. The finding suggests that such tethers could also help connect once-intact forests that have been fragmented by human activities and aid conservation efforts of these and other canopy dwellers.

“Fragmentation is becoming an increasing problem,” says Tremaine Gregory, a conservation biologist at the Smithsonian’s National Zoo and Conservation Biology Institute in Washington, D.C., who wasn’t involved in the study. “It’s probably going to be, along with climate change, one of the biggest challenges for biodiversity in decades.”

The landslide damaged an arboreal highway, a preferred route through the trees that the apes use to traverse the rainforest. Hainan gibbons (Nomascus hainanus) are almost strictly arboreal, and forest fragmentation can divide the already critically endangered primates (SN: 8/6/15) into smaller breeding populations, says Bosco Chan, a conservation biologist at the Kadoorie Farm and Botanic Garden in Hong Kong. That can lead to inbreeding or local groups dying out.

Only about 30 individuals remain of this species, all living in a nature reserve on Hainan Island. For the group of nine gibbons studied, the researchers didn’t want the animals to get hurt crossing the gap.

Enter the rope bridge. It took months for the gibbons to catch on, but about 176 days after the bridge’s installation, camera traps captured the gibbons taking to the ropes. “I was very excited when [the gibbons] first started using it,” Chan says.

Eventually, the scientists observed the gibbons crossing the bridge about as frequently as the animals had traveled that stretch of forest before the landslide. Females and juveniles preferentially used the bridge, while an adult male never used it, and nearly grown juveniles rarely did.

Though the scientists expected the animals would swing along under the bridge using their arms, Chan says, many preferred to walk as though on a tightrope, using one rope as a handrail, or to climb along the ropes using all their limbs. Occasionally, gibbons scampered across without holding on with their upper limbs. For now, the bridge provides a temporary solution while transplants of native trees grow and other trees regenerate.

Such artificial bridges provide a sensible and innovative approach to help gibbons get around safely, says Susan Cheyne, a primatologist based in Oxford, England, and vice chair of the International Union for Conservation of Nature’s Section on Small Apes, who advised the Hainan project. “We want them to stay up in the canopy.” On the ground, gibbons may get hit by cars, get into fights with dogs or be exposed to parasites that the animals wouldn’t typically encounter.

What’s more, the Hainan gibbons’ adoption of the bridge suggests that it’s a “tool that other primate conservation groups could potentially use,” Cheyne says, as these gibbons are a “relatively fickle species. They are not overly keen on using new things,” she says.

Beyond primates, other animals may use such crossings too. The team also saw two squirrels and another rodent use the bridge. Depending on where canopy bridges are located, marsupials or rodents could benefit, though observing such creatures to know for sure could be a challenge if they are nocturnal.