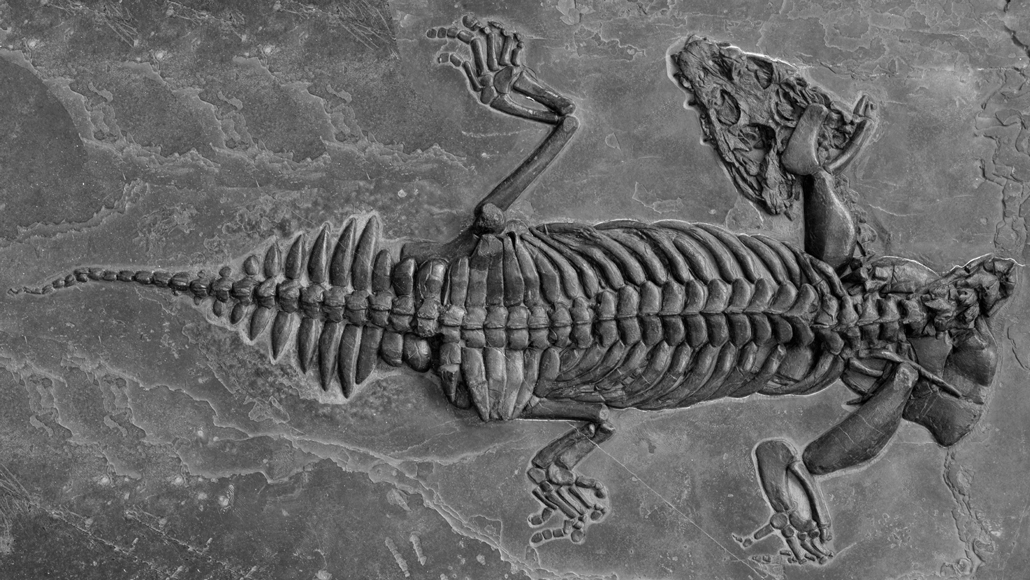 Around 240 million years ago, large reptiles called nothosaurs ruled the seas. These now-extinct sea monsters grew roughly five meters long or longer and flicked their long tails to speed through the water, chasing down fish.

Now researchers have found fossils of a type of mini nothosaur with features that suggest the creature lived a very different lifestyle from its bigger cousins. Brevicaudosaurus jiyangshanensis may havelurked on the shallow seafloor, floating motionless until unsuspecting prey got too close, say researchers, who describe the new species October 28 in the Journal of Vertebrate Paleontology.

Two B. jiyangshanensis fossils were found in quarries about a kilometer apart in South China. Their size — just about a half meter long, or about the size of a beagle — made the team initially think that it had stumbled upon baby nothosaurs, says Xiao-Chun Wu, a paleobiologist at the Canadian Museum of Nature in Ottawa.

But the bones told a different story. “In the young [nothosaurs], the bones — especially in the limbs — are roundish,” Wu says. However, the bones in these fossils were developed into well-defined shapes, and the skull bones on the side of the head were fused, evidence that the creatures were adults.

B. jiyangshanensis had various features not found on bigger nothosaurs. Its tail was short, broad and flat, and its bones were dense, all of which could have helped the reptilebalance its body as it floated in shallow water.

“This is the first discovery of a small-sized species of a big-sized group,” Wu says. “This is a very new lifestyle we now know about nothosaurs.”

The newly described reptile may have had large lungs relative to its body size, compared with other nothosaurs, helping it to stay underwater for longer. But future skeletal studies are needed to confirm that.