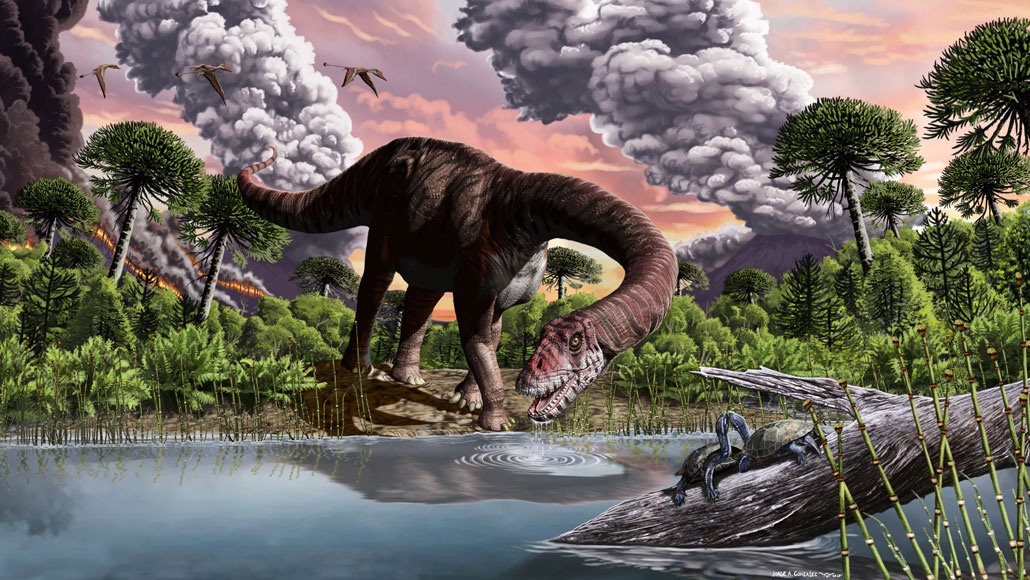 Long-necked sauropods, the largest animals ever to walk on Earth, may have thundered into dominance during the Jurassic Period thanks to a large burst of volcanic activity that began around 184 million years ago, a new study suggests. The resulting environmental crisis may have caused a shift in plant life that gave the tough-toothed, big-gutted herbivores a powerful advantage over other herbivores.

The find comes from the discovery of a new fossil of one of the earliest “true” sauropods in Argentinian Patagonia. Sediments bearing the newly described dinosaur, dubbed Bagualia alba, are precisely dated to 179 million years ago, paleontologist Diego Pol of the Paleontological Museum Egidio Feruglio in Trelew, Argentina, and colleagues report November 18 in Proceedings of the Royal Society B.

B. alba, the researchers found, had the telltale characteristics of true sauropods: large, column-like legs; massive size; long necks relative to the body; broad and strong jaws; and large, spoon-shaped teeth with thick enamel. Also known as eusauropods, this lineage came to dominate the Middle and Late Jurassic roughly 174 million to 145 million years ago (SN: 7/10/18), giving rise to awe-inspiring giants such as Argentinosaurus and Dreadnoughtus schrani (SN: 6/9/15).

During the Early Jurassic, between about 201 million and 174 million years ago, Pol says, plant-eating sauropods competed with many other herbivores, including sauropodomorphs — distant relatives such as Mussaurus patagonicus with less powerful jaws and shorter necks (SN: 5/20/19). What gave the eusauropod giants a leg up on their herbivorous competition has been unclear, in part because there are relatively few fossils dating to the transition between Early and Middle Jurassic.

One possible culprit was an environmental crisis that occurred toward the end of the Early Jurassic, an episode of global warming and ocean acidification that led to a series of species extinctions, particularly in the oceans but also on land. Scientists have previously suggested this episode was linked to large volcanic eruptions in the Southern Hemisphere.

That pulse of volcanism may also have led to a major shift in plant life in the region. The Early Jurassic was dominated by seed ferns, cycads and gingkoes, but by the Middle Jurassic, conifers began to flourish in the more arid, warmer climate. That, in turn, may have made life difficult for many sauropodomorphs, which vanish from the fossil record after the Early Jurassic.

But B. alba, the study shows, was alive and well 179 million years ago, well after the volcanic aftermath. Pol and colleagues suggest that B. alba and other eusauropods may have been best positioned to chomp on the conifers’ very tough leaves. Their extra-powerful jaws and teeth were able to chew those leaves, and their oversized guts were well-adapted to digest the tough plant matter, allowing it to sit and ferment for many days, Pol and colleagues suggest.

The careful dating of the new fossil is a crucial piece of the puzzle, Pol says, because “it provides the first precise evidence [that] the large sauropods became the dominant herbivores in terrestrial ecosystems right after the massive volcanic event.”

The new fossil “is an important addition to our frustratingly incomplete picture of early sauropod evolution,” says Paul Barrett, a paleontologist at the Natural History Museum in London. And the coincidence between the age of the fossil and a major pulse of volcanic activity in the region is intriguing, he adds.

But, he says, “I’d like to see a bit more evidence before scaling this up to a global event” that led to shifts in both plant and dinosaur evolution. Although this is the earliest true sauropod fossil yet found, the lineage of sauropods is thought to go back another 40 million years, into the Late Triassic, based on analyses of the animals’ family tree. And scientists know very little about how those earlier sauropods might have fed, or even where in the world they may have lived. For example, it’s possible that the first true sauropods lived in places where those climatic and floral changes didn’t occur.

For now, though, “the authors provide an interesting new idea that we can test with new discoveries in the future,” Barrett says. “If they’re right, this would give a neat insight into understanding linkages between the evolution of the planet, climate, flora and fauna.”