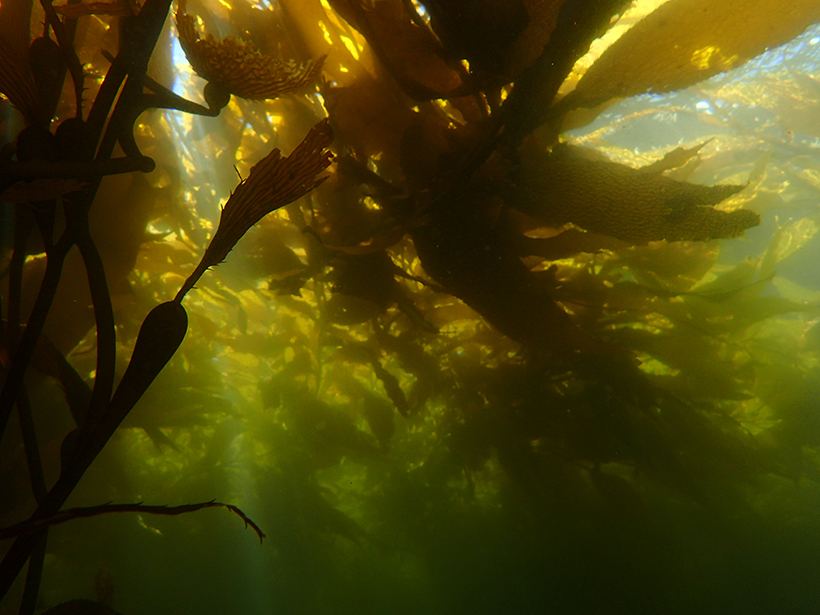 Carbon dioxide is well known as a greenhouse gas, but its effects on climate and environments aren’t limited to the atmosphere. As more carbon dioxide fills the air, more of the gas dissolves into seawater, making the ocean more acidic and threatening marine organisms. Giant kelp may offer a local solution. As kelp grows, it captures carbon from the water and produces oxygen, possibly removing enough carbon dioxide to relieve acidification.

Upwelling also delivers nutrients, so upwelling events spark surges in kelp and phytoplankton growth and productivity. If the kelp-driven carbon fixing spurred by the nutrient inflow outpaces the amount of carbon brought up from deep water, kelp could start consuming anthropogenic carbon in the water, locally alleviating acidification stress.

The researchers observed increased pH, oxygen concentrations, and temperature near the surface both within the kelp forest and outside it, indicating greater productivity after upwelling events, especially in the canopy of the kelp forest. This is good news for pH-sensitive organisms that live in the upper kelp canopy. However, acidity increases with depth, so bottom-dwelling organisms like purple urchins are most at risk for future acidification. The scientists note that the effects of kelp appear to be reduced deeper in the water column, likely because of the way kelp calms water by dampening waves and currents, but the situation could vary from forest to forest.

Although some bottom-dwelling creatures are harmed by increasing acidification, prior research has suggested that organisms exposed to acidification stress may produce offspring that are better able to handle low-pH conditions. Kelp forests could perhaps provide a buffer for sensitive animals, allowing them to gradually adapt to acidic conditions. Kelp does not seem to be a universal solution for coastal ocean acidification, but the researchers say its potential usefulness merits further study. (Journal of Geophysical Research: Oceans, https://doi.org/10.1029/2020JC016320, 2020)