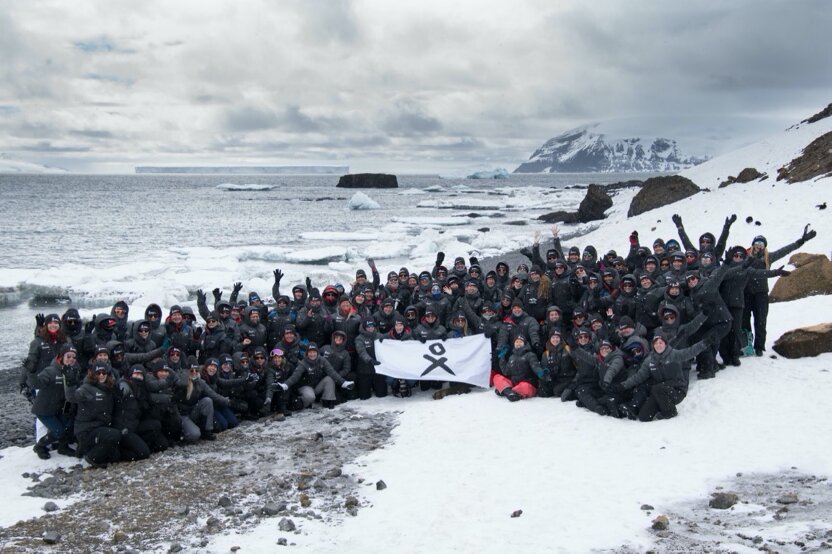 The Western Antarctic Peninsula is one of the fastest warming places on earth. It is also home to threatened humpback and minke whales, chinstrap, Adélie and gentoo penguin colonies, leopard seals, killer whales, seabirds like skuas and giant petrels, and krill—the bedrock of the Antarctic food chain.

With sea ice covering ever-smaller areas and melting more rapidly due to climate change, many species’ habitats have decreased. The ecosystem’s delicate balance is consequently tilted, leaving species in danger of extinction.

Cumulative threats from a range of human activities including commercial fishing, research activities and tourism combined with climate change is exacerbating this imbalance, and a tipping point is fast approaching.

Dr. Carolyn Hogg, from the University of Sydney School of Life and Environmental Sciences, was part of the largest ever all-female expedition to the Antarctic Peninsula, with the women in STEMM initiative, Homeward Bound, in late 2019. There, she witnessed the beauty and fragility of the area, and the negative impacts of climate change and human activity on native species, first-hand. As part of the Homeward Bound program she learnt about the science, conservation and governance of Antarctica.

In a new commentary piece published in Nature, Dr. Hogg and her colleagues from the expedition outline these threats, and importantly, offer ways to counter them. More than 280 women in STEMM who have participated in the Homeward Bound initiative are co-signatories to the piece.

A global initiative, Homeward Bound ‘aims to elevate the voices of women in science, technology, engineering mathematics and medicine in leading for positive outcomes for our planet’.

Women are noticeably absent in Antarctica’s human history, which is steeped in tales of male heroism. Female scientists are still a minority in the region’s research stations.

“Now, more than ever, a broad range of perspectives is essential in global decision-making, if we are to mitigate the many threats our planet faces,” said Dr. Hogg.

“Solutions include the ratification of a Marine Protected Area around the Peninsula, set to be discussed on 19 October, at a meeting of a group of governments that collectively manage the Southern Ocean’s resources,” said Dr. Hogg. “The region is impacted by a number of threats, each potentially problematic in their own right, but cumulated together they will be catastrophic.”

The Peninsula’s waters are home to 70 percent of Antarctic krill. In addition to climate change, these krill populations are threatened by commercial fishing. Last year marked the third largest krill catch on record. Nearly 400,000 tonnes of this animal were harvested, to be used for omega-3 dietary supplements and fishmeal.

“Even relatively small krill catches can be harmful if they occur in a particular region, at a sensitive time for the species that live there,” said Dr. Cassandra Brooks, a co-author on the comment from the University of Colorado, Boulder. “For example, fishing when penguins are breeding lowers their food intake, and affects their subsequent breeding success. A Marine Protected Area will conserve and protect this unique ecosystem and its wildlife, and we need to implement it now.”

As sea ice recedes, populations of larval and juvenile krill, which use the ice for shelter and to feed off the algae it attracts, decline.

A warmer climate and less sea-ice cover will also give opportunities to invasive species, which can enter the territory via international ships, including those carrying tourists.

The lasting tourism and research footprint

Tourism’s footprint is growing. The Peninsula is the most-visited region in Antarctica, owing to its proximity to South America, dramatic beauty and rich marine ecosystem.

“Ships can pollute the ocean with micro-plastics, oils and ship noise,” said Dr. Justine Shaw, another co-author from the University of Queensland.

While the International Association of Antarctica Tour Operators (IAATO), a self-regulating association that advocates for safe and environmentally responsible travel, provides guidelines for cruise ships and tourists, “an increasing number of vessels that are not IAATO members and that carry up to about 500 passengers have begun visiting the region, and this is concerning as it adds greater pressure,” Dr. Shaw said.

While the collection of data and knowledge is important, research activities can also potentially damage the Antarctic Peninsula’s sensitive environment, the team stated.

The Peninsula hosts science facilities belonging to 18 nations—the highest concentration on the continent. New stations and expansions are ever-present.

While these scientific endeavours can increase our understanding of native species’, there can be negative impacts on the region if not properly managed. Dr. Shaw explained: “Buildings and infrastructure displace wildlife and vegetation.”

Three ways to protect the Peninsula

1. A Marine Protected Area (MPA) designation for the waters

The authors endorse a proposed MPA for the western Antarctic Peninsula. Led by Chile and Argentina, this is due to be discussed during a two-week meeting commencing 19 October by the Commission for the Conservation of Antarctic Marine Living Resources (CCAMLR), a group of governments that collectively manage the Southern Ocean’s resources.

The MPA would reduce commercial fishing in ecologically sensitive areas, helping preserve the food chain and ensuring greater sustainability for the future in surrounding areas.

A comparable MPA for the Ross Sea, in southern Antarctica, was agreed to in October 2016 to global celebration.

Only 1.5 percent of Antarctica’s ice-free terrain enjoys formal protected status. Much unprotected land is adjacent to research and tourist areas and is therefore vulnerable to human-generated risks like pollution and invasive species.

The authors call for a greater extent and variety of landscapes to be protected.

“Globally, parties to the Convention on Biological Diversity have agreed that 17 percent of land should be protected to ensure conservation of biodiversity. This is a good starting point for Antarctica,” Dr. Hogg said.

For conservation efforts to be effective, they have to be collaborative. Dr. Shaw furnished examples: “The Council of Managers of National Antarctic Programs (COMNAP) must work to limit the expansion of research infrastructure. Tour operators’ body IAATO and parties to the Antarctic Treaty System should cooperate to better manage tourist activity—ensuring all tour operators abide by IAATO regulations regardless of whether they are IAATO members.”

Provided by
University of Sydney