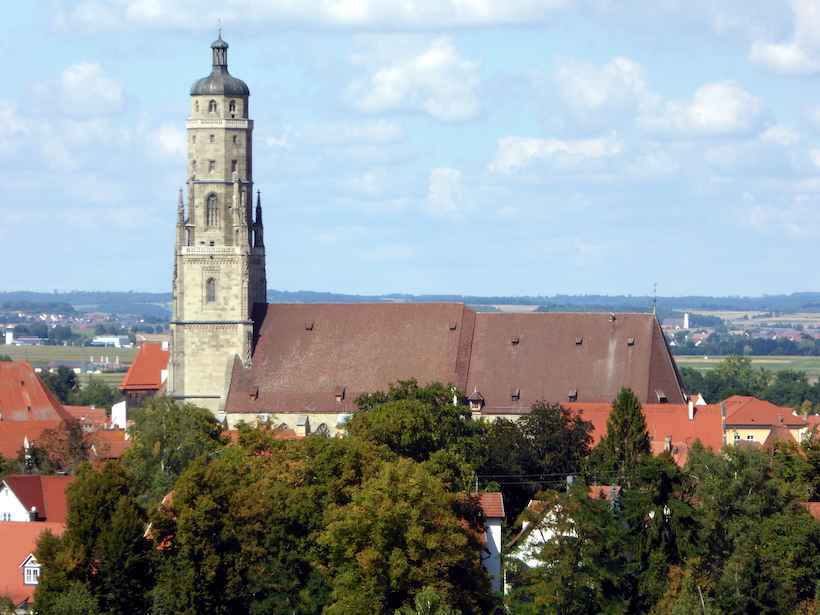 A Gothic church rises high above the medieval town of Nördlingen, Germany. But unlike most churches, St. George’s is composed of a very special type of rock: suevite, a coarse-grained breccia that’s formed only in powerful impacts. That discovery and other lines of evidence have helped researchers determine that Nördlingen lies within an impact crater. Now, scientists have unearthed evidence that this crater and another one just 40 kilometers away were formed by a “double disaster” of two independent asteroid impacts. That revises a previous theory that these features are the relics of a one-two cosmic punch from a pair of gravitationally bound asteroids striking Earth simultaneously.

A Handful of Double Craters

Our planet is dotted with nearly 200 confirmed impact structures, and a handful of them appear in close pairs. Some researchers have proposed that these apparent double craters are scars created by binary asteroids slamming into Earth at the same time. That makes sense, said William Bottke, a planetary scientist at the Southwest Research Institute in Boulder, Colo., not involved in the new research. “We don’t have that many craters on the Earth. When you see two sitting right next to one another, it’s natural to think there’s an association.”

However, scientists have theoretically determined that the binary asteroid scenario is unlikely. That’s because most binary asteroids are orbiting one another too closely to produce two distinct craters were they to slam into a rocky body, Bottke and his colleagues showed back in the 1990s. “If you’re going to get two separate craters from the impact of a binary asteroid, they have to be pretty well separated,” said Bottke.

Now, Elmar Buchner, a geologist at the Neu-Ulm University of Applied Sciences in Nue-Ulm, Germany, and his colleagues have investigated the provenance of two impact craters near Stuttgart using observational data. They focused on the 24-kilometer-diameter Ries crater—which encompasses the town of Nördlingen—and the 4-kilometer-diameter Steinheim Basin, which are located roughly 40 kilometers from one another.

The Ries crater formed about 14.8 million years ago during the Miocene epoch, argon-40/argon-39 age dating has revealed. The age of the Steinheim Basin hasn’t been conclusively measured, but some researchers have suggested that it formed contemporaneously. “It was nearly dogma in Germany that this must be the result of a double impact at the same time,” said Buchner.

Buchner and his collaborators investigated outcroppings of rock in the region around the craters and found a layer of jumbled, fractured sediments. That wasn’t a surprise—such seismites are a sign that powerful seismic waves passed through the region, which would have certainly occurred after an asteroid impact. However, the researchers found that this seismite horizon was crosscut by a second horizon, this one consisting of vertical tubelike features known as clastic dikes. The discovery of these two distinct seismite units is evidence of two separate episodes of ground shaking, Buchner and his colleagues concluded. That rules out a strike by a binary asteroid, which would have launched just one round of seismic waves.

“Eventually, two [craters] are going to be very close to one another, just by chance.”

The impact that created the Ries crater must have formed first, the scientists surmised, because blocks of limestone—ejecta from the Ries impact—cap the lower seismite horizon. That’s consistent with previous research suggesting that fossils within the Ries crater are a few hundred thousand years older than fossils found within the Steinheim Basin.

This region “witnessed a double disaster in the Middle Miocene,” the team concluded in their paper, which was published last month in Scientific Reports. That’s rare but not unheard of, said Bottke. “If you only have so much terrain and you keep adding craters, eventually, two are going to be very close to one another, just by chance.”