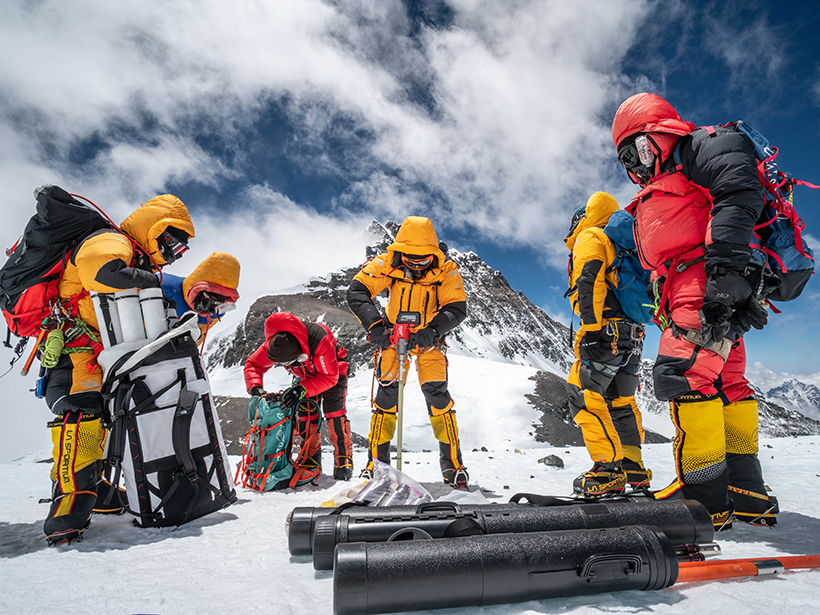 There isn’t much room for error 8,000 meters above sea level, and everyone on the expedition knew it. Mount Everest is notoriously challenging to climb, but conducting research on the iconic mountain is an even taller task. It was clear and sunny, but the thin air was bitterly cold. The team relied on supplemental oxygen to breathe. Bundled in brightly colored snowsuits with their faces obscured by ski goggles, the scientists were virtually unrecognizable. They wrote their names on their chests with Sharpies.

“This is exploratory science in the best sense of the word.”

In May 2019, National Geographic and Rolex Perpetual Planet Everest Expedition members conducted fieldwork near the summit of the tallest mountain on Earth. Their efforts provided both a model for high-altitude fieldwork and valuable weather data and climate records from Mount Everest. On the expedition, Mariusz Potocki, a Ph.D. student at the University of Maine, collected the world’s highest ice core to date. Potocki and his adviser, the expedition’s scientific leader, Paul Mayewski, have since begun analyzing the sample using a nondestructive and high-resolution technique called laser ablation.

Exactly what they’ll be able to glean from the ice core is still an open question. “This is exploratory science in the best sense of the word,” said Eric Steig, a glaciologist at the University of Washington who was not involved in the study.

A Window into a Well-Preserved Past

Ice, like sedimentary rock, builds up over time. Each snowfall adds a layer, which gets compressed under new snow. Analyzing the chemical signals in those layers offers insight into past climate conditions. This data collection is urgent; glaciers, including those covering Mount Everest, are melting rapidly. It’s important to collect samples before the evidence vanishes with the ice.

In preparation for the expedition, Potocki and Mayewski modified off-the-shelf equipment to make it as light as possible. They triple- and sometimes quadruple-checked their gear and brought a backup drill in case one failed. The last thing anyone wanted was an equipment malfunction.

Though the fieldwork went as smoothly as anyone had hoped, the team encountered delays in processing the samples. “We’ve found the things we hoped to so far,” Mayewski said of the early analyses. “The ice is well preserved in terms of a climate and environmental record,” he continued, meaning that years, seasons, and possibly the frequency of storm events are distinguishable in the core.

Instead of the 100 or so samples per meter that the sectioning and melting methods yield, laser ablation allows for 10,000–20,000.

To analyze the samples, the team is using a laser ablation system previously developed by Mayewski. A laser vaporizes a series of shards of ice about a quarter the width of a human hair. Those vapors are then transported with argon gas to an instrument that takes nearly 100 measurements from the sample.

Unlike other methods of ice core analysis that involve slicing sections of the core or melting it down, laser ablation is essentially nondestructive. Under a microscope, “it looks as if you’re absolutely drilling a trench inside of this glacier,” Mayewski said, but “when you take the ice out, you can’t even see a scratch.” Preserving the sample is important for repeatability and maximizing the number of measurements that can be taken from each core.

The preciseness of laser ablation has another advantage as well. The researchers can look at the layers of ice in great detail. Instead of the 100 or so samples per meter that the sectioning and melting methods yield, laser ablation allows for 10,000–20,000.

Not everyone agrees on the value of such high-resolution measurements, however. “There’s probably no meaningful information at that scale,” Steig said. Still, the researchers claim that with laser ablation they can not only identify seasonal variations but also get a sense of the severity of past monsoon seasons.

Regardless of the information the team is able to extract, collecting an ice core from the roof of the world is itself a remarkable feat. “I really felt so lucky I was able to collect such a good quality ice [core] at 8,000-meter elevation,” Potocki said. “Mission accomplished.”

And, yes, Guinness World Records did reach out.