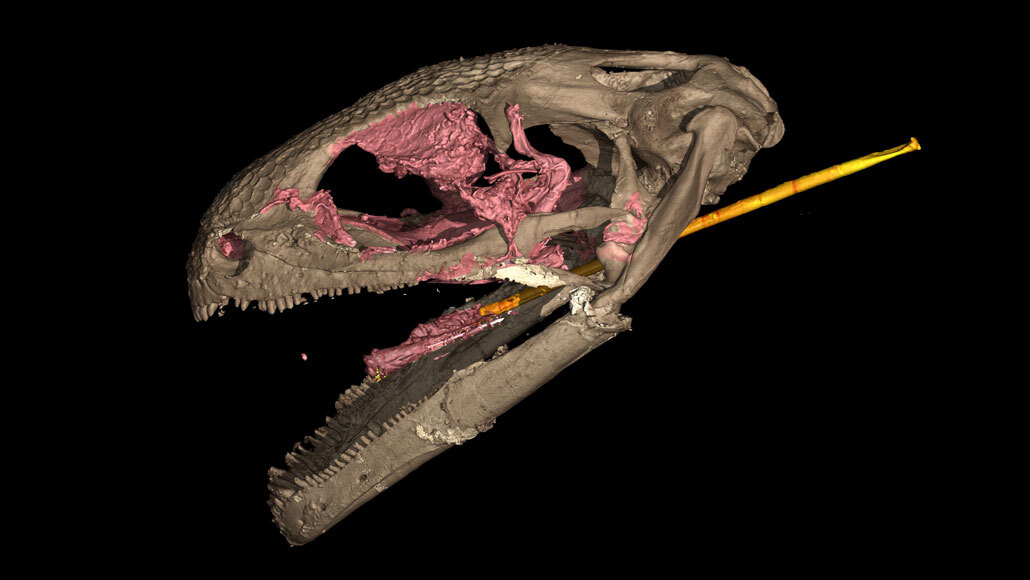 A tiny amphibian that lived 99 million years ago had a secret weapon: A tongue that shot out of its mouth like a bullet to snatch its prey. It’s the earliest known example of this “ballistic tongue” style of predation, researchers say.

The amphibian is a new species, represented by a few tiny bits of skeleton and soft tissue discovered in chunks of Myanmar amber. The centerpiece of these finds is a newly discovered complete skull, exquisitely preserved in 3-D, that includes a long thin bone connected to the creature’s neck, with some remnants of tongue attached to the end.

The creature, which measured just 52 millimeters long from snout to pelvis (not including a tail), used this bone to shoot its tongue out of its mouth and catch prey. This “sit-and-wait” style of predation is similar to that of a modern chameleon, researchers report in the Nov. 6 Science.

Led by paleontologist Juan Daza of Sam Houston State University in Huntsville, Texas, the team dubbed the creature Yaksha perettii. “Yaksha” is a type of nature spirit in Myanmar folklore, thought to protect the roots of trees, and “perettii” is in honor of Swiss mineralogist Adolf Peretti, who discovered the fossil.

Y. perettii has a lot in common with chameleons, including its scaly skin and tongue-flicking feeding style, Daza says. In fact, in a previous study, he and Edward Stanley of the Florida Museum of Natural History in Gainesville described a separate fossil, also preserved in amber, of what they now know to be a juvenile Y. peretti as one of those reptiles. At the time, “we agreed that it was a chameleon,” says Stanley, who is also a coauthor on the new study.

Then paleontologist Susan Evans of University College London stepped in. The creature was not a reptile at all, she said: It was an albanerpetontid, an extinct group of weird amphibians that Evans has been studying for decades. Albanerpetontids first appear in the fossil record as far back as 165 million years ago and were last found in rocks dating to just a million years ago.

These amphibians were widespread — scientists have dug up thousands of albanerpetontid fossils in locations from Spain to Canada to Japan. These fossils built a picture of a wacky, salamander-like creature with pointy claws, an unusual jaw structure and a four-legged body covered in scales. Based on their scaly heads and claws, scientists thought that the creatures were probably burrowers, like some modern salamanders. But that didn’t explain some of the features.

“They were strange little things with weird jaw joints and neck joints,” says Evans, a coauthor on the new study.

Unlike modern amphibians, this group had two separate neck joints, allowing for more flexibility, and an odd jaw joint “that seems to do a kind of flexing movement. It was clearly doing something rather specialized,” Evans says. There was one known albanerpetontid specimen that did have a long, thin bone preserved near its skull, and “I suspected for a long time that they had some sort of ballistic tongue mechanism,” she says. But without more detailed fossils, the hypothesis was hard to prove.

That all changed with the discovery of the skull, which shows in beautiful detail the entire tongue apparatus. “The fact that you could see the long, rodlike bone actually embedded at the base of the tongue pad — that’s really strong evidence that this animal was a tongue-flicker to catch its prey,” says David DeMar, a paleobiologist at Smithsonian Museum of Natural History in Washington, D.C., who was not involved in the study.

“These specimens completely change our understanding about albanerpetonids,” DeMar says.

Rather than being burrowers, these ballistic-style feeders were arboreal predators, clinging to tree limbs with sharp claws as the animals waited for invertebrate prey to buzz or stroll by, the researchers say.

That interpretation “looks spot-on to me,” says James Gardner, a paleontologist at the Royal Tyrrell Museum in Drumheller, Canada, who was not involved in the study.

The skull fossil clears up a lot of confusion about this amphibian group’s lifestyle, Gardner says, but in other ways, albanerpetontids remain as enigmatic as ever. That’s because they’re so unusual, with so many odd features, that it’s difficult to sort out where they belong on the evolutionary tree of life, and how they’re related to other amphibians, living and extinct.

Still, this find just goes to show that “one or two fossils can really upset the apple cart,” says Gardner, who admits that he, like many paleontologists, previously thought that this group were burrowers. “It’s very exciting. And I’m quite happy to be wrong.”