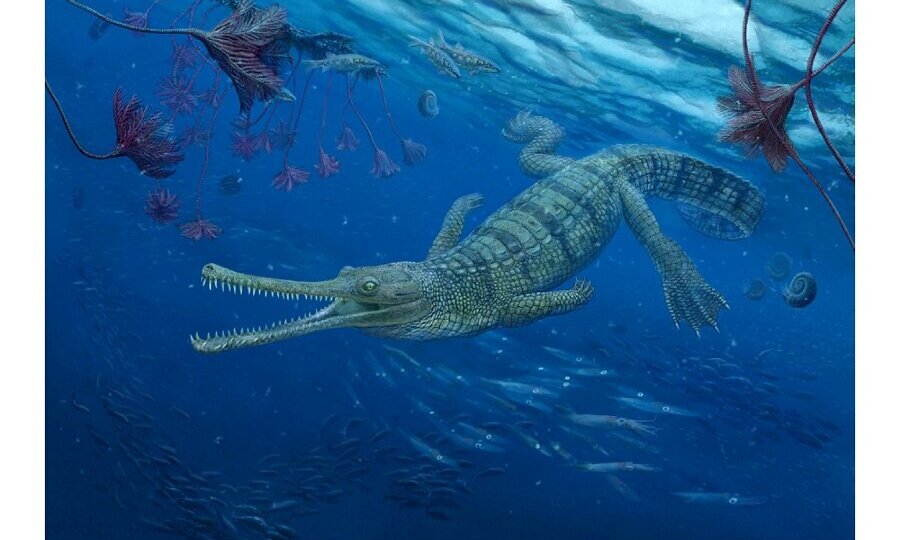 Scientists probing a prehistoric crocodile group’s shadowy past have discovered a timeless truth—pore over anyone’s family tree long enough, and something surprising will emerge.

Despite 300 years of research, and a recent renaissance in the study of their biological make-up, the mysterious, marauding teleosauroids have remained enduringly elusive.

Scientific understanding of this distant cousin of present day long snouted gharials has been hampered by a poor grasp of their evolutionary journey—until now.

Researchers from the University of Edinburgh have identified one previously unknown species of teleosauroid and seven of its close relatives—part of a group that dominated Jurassic coastlines 190 to 120 million years ago.

Their analysis offers tantalizing glimpses of how teleosauroids adapted to the momentous changes that occurred during the Jurassic period, as the earth’s seas experienced many changes in temperature.

“Our study just scratches the surface of teleosauroid evolution,” says study lead Dr. Michela M. Johnson, of the University’s School of GeoSciences. “But the findings are remarkable, raising interesting questions about their behavior and adaptability.

“These creatures represented some of the most successful prehistoric crocodylomorphs during the Jurassic period and there is so much more to learn about them.”

The study reveals that not all teleosauroids were engaged in cut and thrust lifestyles, snapping at other reptiles and fish from the seas and swamps near the coast.

Instead, they were a complex, diverse group that were able to exploit different habitats and seek out a variety of food sources. Their physical make-up is also more diverse than was previously understood, the scientists say.

Previous research had provided insights into the origins and evolution of this fossilized croc’s whale-like relatives metriorhynchids, but less was known about teleosauroids.

To address this, the expert team of palaeontologists examined more than 500 fossils from more than 25 institutions around the world.

Cutting edge computer software enabled the team to glean swathes of revealing data regarding theiranatomical similarities and differences, by examining the entire skeleton, teeth and bony armor, which indicated whether species were closely related or not.

This information enabled the team to create an up-to-date family tree of the teleosauroids group from which emerged two new large groups, whose anatomy, abundance, habitat, geography and feeding styles differ from one another significantly.

The first group, teleosaurids, were more flexible in terms of their habitat and feeding. The second group known as machimosaurids—which included the fearsome turtle crushers, Lemmysuchus and Machimosaurus—were more abundant and widespread.

Names given by the team to seven newly described fossils, found in both teleosaurids and machimosaurids, reflect a curious range of anatomical features—among them Proexochokefalos, meaning ‘large head with big tuberosities’ and Plagiophthalmosuchus, the ‘side-eyed crocodile’.

There are even hints of their diverse behavioral characteristics and unique locations—Charitomenosuchus, meaning ‘graceful crocodile’ and Andrianavoay, the ‘noble crocodile’ from Madagascar.

Researchers have named the newly discovered species, Indosinosuchus kalasinensis, after the Kalasin Province in Thailand, where the fossil—now housed in Maha Sarakham University—was found.

The recognition of I. kalasinensis shows that at least two species were living in similar freshwater habitats during the Late Jurassic—an impressive feat as teleosauroids, with the exception of Machimosaurus, were becoming rare during this time.

Dr. Steve Brusatte, Reader in Vertebrate Palaentology, at the School of Geosciences, University of Edinburgh, said: “The same way family trees of our own ancestors and cousins tell us about our history, this huge new family tree of teleosauroids clarifies their evolution. They were some of the most diverse and important animals in the Jurassic oceans, and would have been familiar sights along the coastlines for tens of millions of years.”

The study, published in the scientific journal PeerJ.

Provided by
University of Edinburgh