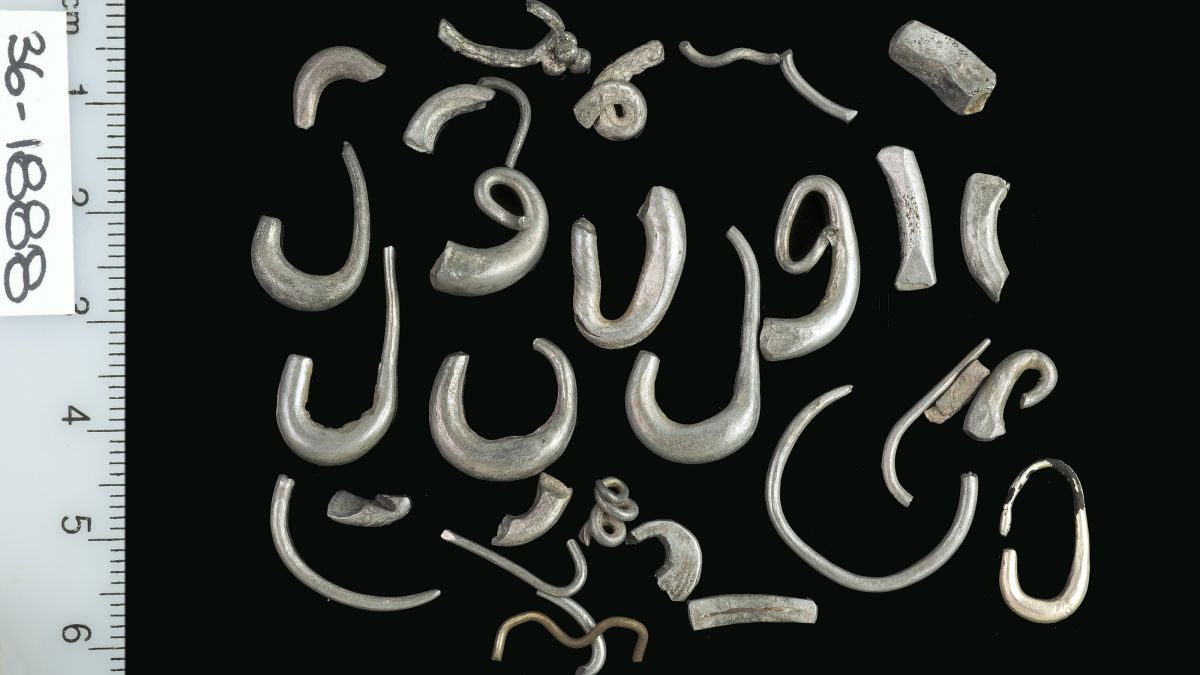 A shortage of silver caused by the collapse of leading Bronze Age civilizations around the eastern Mediterranean about 1200 B.C. resulted in the original “dirty money” — several hundreds of years before coins had been invented.

The ancient counterfeiting was revealed by archaeologist Tzilla Eshel, then a doctoral student at the University of Haifa, who studied the chemical composition of 35 buried hoards of Bronze Age silver found at archaeological sites around Israel.

In eight of the hoards — dating from the time of the “Late Bronze Age collapse,” when the region’s most powerful kingdoms suffered often-violent demises — had been deliberately debased, with cheaper alloys of copper substituted for much of the silver and an outer surface that looked like pure silver.

Because the hoards date back to the when the region, then known as Canaan, was ruled by ancient Egypt, the researchers think this deception originated with the Egyptian rulers, possibly to disguise the fact that their supplies of the precious silver widely used as currency were failing.

Canaan had no silver ores of its own, and the precious metal had to be imported. But the silver trade appears to have quickly come to an end when the nearby kingdoms started collapsing between about 1200 and 1150 B.C.

“There was a shortage of silver, probably related to the Late Bronze Age collapse,” Eshel told Live Science. “[Counterfeiting] continued after the Egyptians left Canaan, but they were probably the ones who initiated it.”

Long before coins were invented, probably in the kingdom of Lydia in western Asia Minor about the seventh century B.C., silver was widely used as a currency throughout the ancient Mediterranean.

Originally, the precious metal was valued by its weight, either of cut scraps of silver and broken jewelry for small amounts or of entire ingots for larger amounts.

Gold, too, was used as a means of exchange, but it was much rarer and more expensive in most regions, whereas silver was less expensive and much more common.

The research by Eshel and her colleagues, to be published in the January 2021 issue of the Journal of Archaeological Science, identified two of the earliest debased silver hoards: one from Beit Shean in northern Israel and another from Megiddo, — a Canaanite city famed for several ancient battles, that gave its name as Armageddon in the Christian bible to a mythical war at the end of the world.

Both hoards dated from the 12th century B.C., Eshel said, when Egypt’s New Kingdom had ruled Canaan by right of conquest for about 300 years.

The Beit Shean hoard of silver, which weighs about 5.5 ounces (157 grams), contained ingots of only 40% silver, which had been alloyed with copper and other cheap metals. The ingots had an enriched silver surface but a copper-rich core that may have been achieved by slowly cooling the ingot after it was melted and poured out.

The Megiddo hoard, which weighed 3.4 ounces (98 grams) had an even lower amount of silver — around 20%. But the debasement had been disguised by the addition of the elemental metal arsenic, which gives a silvery shine to copper.

Both methods of silver debasement would have taken a considerable amount of work and knowledge to achieve, Eshel said. “They are both quite sophisticated methods, but it could have been that the arsenic [method] was easier.”

Eshel suspects that the practice of debasing silver used as currency became accepted and then widespread as the shortage of silver continued in Canaan.

“I think it may have started as a forgery or counterfeiting, and then maybe it became a convention over time,” she said. “I don’t think you can produce silver-copper-arsenic ores for over 250 years and that no one would notice, because it corrodes [by turning green] over time.”

The ancient practice of cutting into silver ingots also appears at around the same time, and it may have been a way to check if the ingots were silver all the way through and not copper at their cores, she said.

Almost three centuries later, as new powers like the Neo-Assyrians, Persians and Greek colonies started to take control of the region, the raw silver used as currency regained its purity, according to the study.

From the mid-10th century B.C., “the silver was pure … signaling a previously unrecognized large-scale import of silver,” the researchers wrote.

The reasons for the Late Bronze Age collapse about 3,200 years ago in the eastern Mediterranean are hotly debated.

Economic disruptions, droughts, volcanic eruptions, earthquakes and piracy have all been blamed for the sudden end of many powerful kingdoms in the region, including the collapse of the Hittite Empire in Anatolia, the end of the ancient Egyptian period of the New Kingdom, and the fall of the Mycenaean culture in Greece.