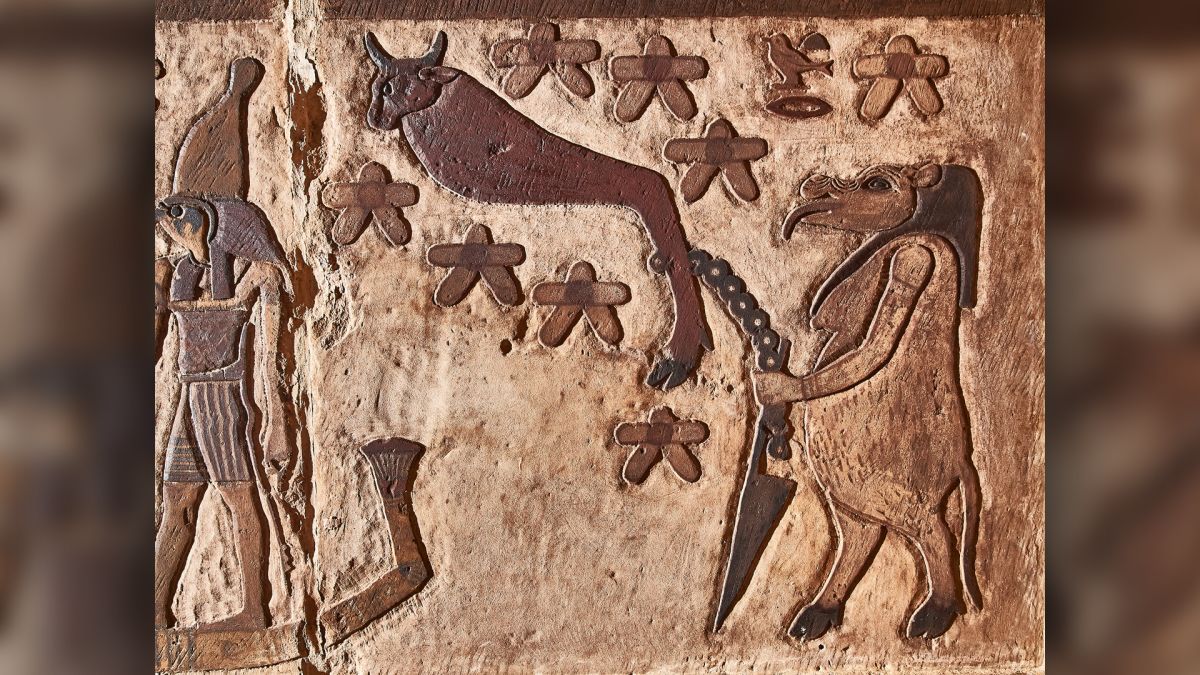 The restoration has also uncovered the gorgeous original colors the ancient Egyptians painted the 2,000-year-old temple.

As workers in Egypt remove soot and dirt from the temple, sometimes with a mixture of alcohol and distilled water, the original painted carvings and hieroglyphics beneath are so vibrant, “it looks like it was painted yesterday,” project leader Christian Leitz, a professor of Egyptology at the University of Tübingen in Germany, told Live Science. “But we are not repainting anything, we are just removing the soot.”

However, without an image to accompany these descriptions, there’s no way to know which stars in the night sky they describe, he said.

The first modern description of the Greco-Roman temple, known as the Temple of Esna, dates to 1589, when a Venetian trader visited Egypt and described it, according to the UCLA Encyclopedia of Egyptology. The town of Esna, about 40 miles (60 kilometers) south of the ancient capital of Luxor, used to have more temples, but two were quarried during the industrialization of Egypt, while the largest one — the Temple of Esna — was used to store cotton during the first half of the 19th century, Leitz said.

This sanctuary-turned-storage facility was likely valued for its location in the city center. People began building houses and shacks directly against some of its walls, and postcards from the 19th and 20th centuries show it surrounded by rubble. Decades of neglect left the temple filthy, covered in soot and bird droppings.

Today, only the vestibule is left. The large sandstone structure is supported by 24 columns and also has 18 free-standing columns decorated with painted carvings of plants. It stands about 120 feet long, 65 feet wide and 50 feet high (37 by 20 by 15 meters). But it would have been dwarfed by the actual temple, built under Roman Emperor Claudius (ruled A.D. 41-54). It’s a mystery what happened to this part of the temple; it was already gone by the time the Venetian trader described it in the 16th century.

During the latest restoration, researchers discovered new inscriptions, including those of the unknown constellations. Leitz noted that when the ancient Egyptians decorated the temple, they would first draw a design in black ink, then have an artisan carve the relief and then have a painter paint the relief.

On the astronomical ceiling, many of the inscriptions were drawn in ink, but not carved or painted.

“They were previously undetected under the soot and are now being exposed piece by piece,” Leitz said.

The project, which began in 2018, is a collaboration between the Institute for Ancient Near Eastern Studies (IANES) at the University of Tübingen and the Egyptian Ministry of Tourism and Antiquities.