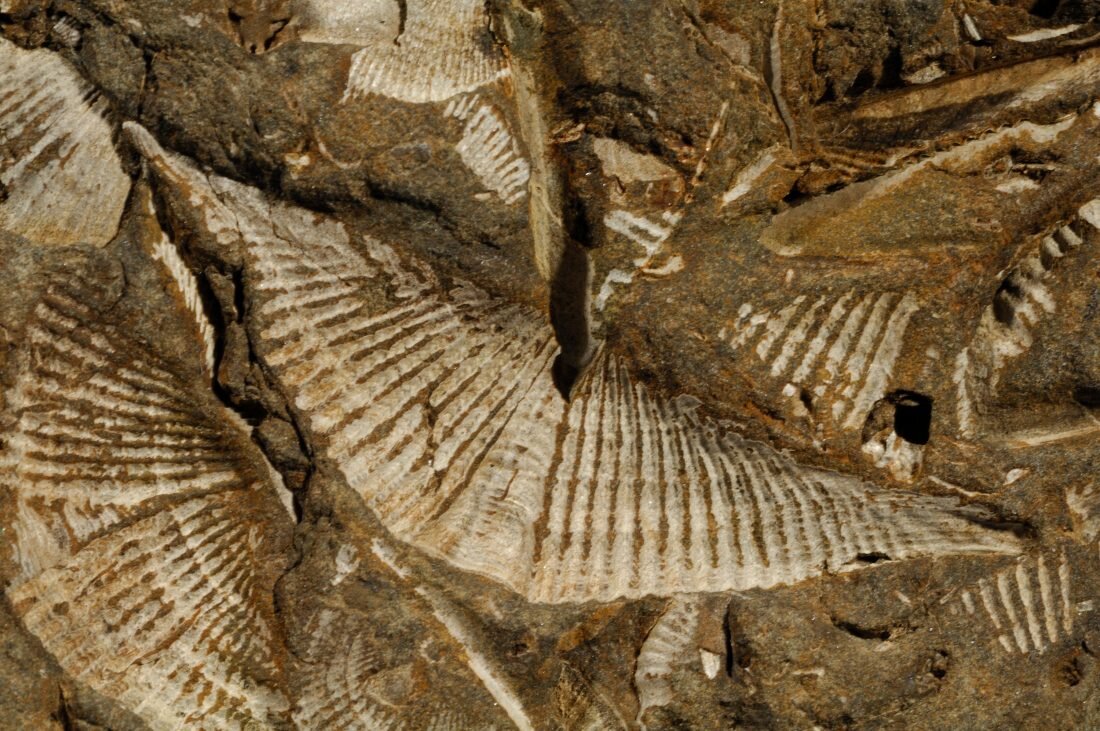 Members of Syracuse University’s College of Arts and Sciences are shining new light on an enduring mystery—one that is millions of years in the making.

A team of paleontologists led by Professor Cathryn Newton has increased scientists’ understanding of whether Devonian marine faunas, whose fossils are lodged in a unit of bedrock in Central New York known as the Hamilton Group, were stable for millions of years before succumbing to waves of extinctions.

Drawing on 15 years of quantitative analysis with fellow professor Jim Brower (who died in 2018), Newton has continued to probe the structure of these ancient fossil communities, among the most renowned on Earth.

The group’s findings, reported by the Geological Society of America (GSA), provide critical new evidence for the unusual, long-term stability of these Devonian period communities.

Such persistence, Newton says, is a longstanding scientific enigma. She and her colleagues tested the hypothesis that these ancient communities displayed coordinated stasis—a theory that attempts to explain the emergence and disappearance of species across geologic time.

Newton and Brower, along with their student Willis Newman G’93, found that Devonian marine communities vary more in species composition than the theory predicts. Newton points out that they sought not to disprove coordinated stasis but rather to gain a more sophisticated understanding of when it is applicable. “Discovering more about the dynamics of these apparently stable Devonian communities is critical,” she says. “Such knowledge has immediate significance for marine community changes in our rapidly warming seas.”

Since geologist James Hall Jr. first published a series of volumes on the region’s Devonian fossils and strata in the 1840s, the Hamilton Group has become a magnet for research scientists and amateur collectors alike. Today, Central New York is frequently used to test new ideas about large-scale changes in Earth’s organisms and environments.

During Middle Devonian time (approximately 380-390 million years ago), the faunal composition of the region changed little over 4-6 million years. “It’s a significant amount for marine invertebrate communities to remain stable, or ‘locked,'” explains Newton, a professor in the Department of Earth and Environmental Sciences.

She, Brower and student researchers spent years examining eight communities of animals that once dwelled in a warm, shallow sea on the northern rim of the Appalachian Basin (which, eons ago, lay south of the equator). When the organisms died, sediment from the seafloor began covering their shells and exoskeletons. Minerals from the sediment gradually seeped into their remains, causing them to fossilize. The process also preserved many of them in living position, conserving original shell materials at some sites.

These fossils currently populate exposed bedrock throughout Central New York, ranging from soft, dark, deep-water shale to hard, species-rich, shelf siltstone. “Communities near the top of the bedrock exhibit more taxonomic and ecological diversity than those at the bottom,” Newton says. “We can compare the community types and composition through time. They are remarkable sites.”

Coordinated stasis has been a source of contention since 1995, when it was introduced. At the center of the dispute are two model-based explanations: environmental tracking and ecological locking.

Environmental tracking suggests that faunas follow their environment. “Here, periods of relative stasis are flanked by coordinated extinctions or regional disappearances. When the environment changes, so do marine faunas,” says Newton, also Professor of Interdisciplinary Sciences and Dean Emerita of Arts and Sciences.

Ecological locking, in contrast, views marine faunas as tightly structured communities, resistant to large-scale taxonomic change. Traditionally, this model has been used to describe the stability of lower Hamilton faunas.

Newton and her colleagues analyzed more than 80 sample sites, each containing some 300 specimens. Special emphasis was placed on the Cardiff and Pecksport Members, two rock formations in the Finger Lakes region that are part of the ancient Marcellus subgroup, famed for its natural gas reserves.

“We found that lower Hamilton faunas, with two exceptions, do not have clear counterparts among upper ones. Therefore, our quantitative tests do not support the ecological locking model as an explanation for community stability in these faunas,” she continues.

Newton considers this project a final tribute to Newman, a professor of biology at the State University of New York at Cortland, who died in 2014, and Brower, who fell seriously ill while the manuscript was being finalized. “Jim knew that he likely would not live to see its publication,” says Newton, adding that Brower died as the paper was submitted to GSA.

She says this new work extends and, in some ways, completes the team’s earlier research by further analyzing community structures in the Marcellus subgroup. “It has the potential to change how scientists view long-term stability in ecological communities.”