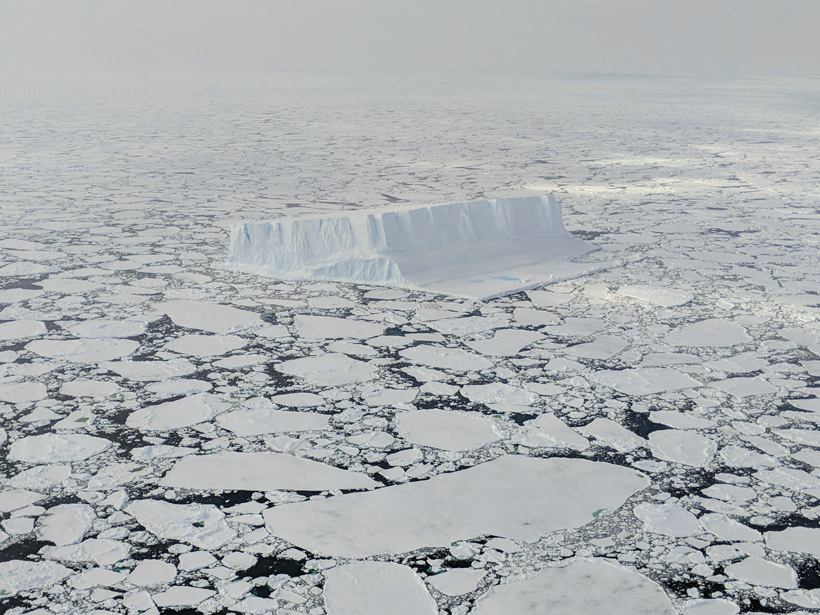 Understanding how the Antarctic Ice Sheet will respond to anthropogenic climate change is not a straightforward problem, but accurate projections are required to help societies prepare for impacts such as sea level rise. This requires knowledge of which areas of Antarctica will retreat, as well as the duration and rates of change, which in turn requires an integration of observational and modelling knowledge from all Earth system-based scientific disciplines. A recent article published in Reviews of Geophysics has compiled this information, including interactions of the Antarctic Ice Sheet with the atmosphere and ocean, the solid-Earth response to changing ice mass, and records of past changes in the ice and ocean.

What role does the Antarctic Ice Sheet play in the global climate system?

The Antarctic Ice Sheet is an integral part of Earth’s climate system. It amplifies small variations in the energy received from the Sun, modifies the climate through its influences on global sea level and carbon cycle changes, and governs important feedbacks across the atmosphere, ocean, and solid Earth.

For example, at the edge of the white continent where the ice and ocean meet, several important climate interactions occur. Notably, the surface ocean freezes seasonally to produce sea ice, which affects the planet’s reflectivity, supports major Southern Ocean ecosystems, and – depending on factors like the shape of the continental shelf and the location of grounded icebergs – affects the formation of Antarctic Bottom Water that oxygenates the global deep ocean and drives the global overturning circulation.

The ice sheet also responds to changes in climate, for example through the transfer of heat from the Southern Ocean to the ice edge that drives ice melt and iceberg calving. The subsequent impact of meltwater and icebergs on the Southern Ocean alters ocean circulation and biological systems, along with global sea level.

How is the Antarctic Ice Sheet responding to current anthropogenic climate forcing?

The loss of continental ice from Antarctica has been accelerating over the past two decades.

The loss of continental ice from Antarctica has been accelerating over the past two decades, particularly from West Antarctica, which holds a sea-level rise potential of about five meters. The most vulnerable regions include the major outlet glaciers of West Antarctica (such as Pine Island and Thwaites) and the Antarctic Peninsula, where melting has been driven by changes in both atmospheric and ocean circulation patterns.

West Antarctica is particularly sensitive to rising ocean temperature because the grounded ice sits in low-lying basins, thousands of meters below sea level. Because ice responds relatively slowly compared to atmospheric temperature changes, the current response to anthropogenic climate change sets up a long term commitment to sea level rise from this sector of Antarctica, although questions remain about the timing and eventual magnitude of future ice loss.

East Antarctica also contains substantial low-lying basins vulnerable to ocean forcing. These basins hold a sea-level rise potential of around 20 meters. Recent ocean-driven melting of some East Antarctic basins has been balanced by increased snowfall in other sectors, and the role of climate variability complicates projections of mass loss.

Is the behavior of the Antarctic Ice Sheet in response to past climate change indicative of how it might respond to future climate change?

Yes. Records of how the ice sheet responded to past climate change can provide insight into the critical processes involved in Antarctic Ice Sheet change and the associated sea level rise. For example, they have been used to improve how physical processes are represented in ice sheet models that simulate retreat.

The rate of current climate change is much higher than observed in past periods of natural climate forcing. However, past events of rapid sea level rise were commonly characterized by rates of up to 1.4 meters per century (2 σ) (Grant et al. [2012]; Grant et al. [2014]), which is higher than the 2013 5th IPCC Assessment’s estimate for global sea-level rise by 2100. This suggests that the projected rates of sea level rise due to anthropogenic climate forcing may need upward adjustment.

The key to increasing confidence in predictions of Antarctica’s future behavior is the accurate representation of physics and ice processes in ice sheet models.

The key to increasing confidence in predictions of Antarctica’s future behavior is the accurate representation of physics and ice processes in ice sheet models, which is informed by contemporary and past ice sheet responses.

It’s also important that the long-term ice mass history is constrained because it reveals how the solid-Earth responds beneath the ice sheet, which can either dampen or amplify the response of the ice sheet to climate change.

Is it possible to accurately estimate how much global sea level might change due to the Antarctic Ice Sheet?

Accurate estimates of how much sea level rise we may expect from melting of the Antarctic Ice Sheet depend on our understanding of the physical processes that drive ice sheet loss, the rate and magnitude of climate forcing (i.e., the future concentration of greenhouse gases), and the solid-Earth responses.

Estimates of Antarctica’s contribution to sea level rise in the coming century range from 0.15 meter to 0.4 meter and even 1 meter.

There are specific technical and computational challenges in capturing dynamic processes and interactions between ice, ocean and solid-Earth in sufficiently fine spatial and temporal resolution over the entire continent. Modeling studies over the past five years have produced estimates of Antarctica’s contribution to sea level rise in the coming century that range from 0.15 meter to 0.4 meter and even 1 meter.

This range reveals differences in the timing of ice shelf collapse, the physics underlying these processes, and the climate forcing applied to the ice sheet, and highlights the need for reduced uncertainty in paleo sea level estimates used to tune model projections.

Another factor to consider when planning for future sea level rise is that the meltwater from Antarctica will not be evenly distributed across the Earth’s surface. Sea level rise will be highly regional, depending on where the ice loss occurs in Antarctica, and the effects associated with gravity, Earth rotation, and the global solid-Earth response.

What have been some of the most significant recent advances in our understanding of the processes and behavior of the Antarctic Ice Sheet?

There have been substantial advances in modeling and observing the response of the Earth’s crust and upper mantle to changes in ice mass. This has contributed greatly to our understanding of the current ice sheet mass balance and explaining the spatial differences in the retreat of glaciers during the last deglaciation.

In addition, a mechanism to slow grounding-line retreat, particularly in regions of West Antarctica where the lithosphere can rapidly adjust, has been supported by new observations of the Earth’s internal structure with rapid decadal-centennial response timescales, and incorporation of more realistic 3-dimensional models of the Earth structure beneath Antarctica.

New observations of Antarctica’s behavior during past periods of climate warming from marine and ice core records with high temporal resolution reveal that the ice sheet can respond rapidly and dramatically to oceanic and atmospheric forcing over short (centennial) timescales.

These records provide insight into the interactions between the ice-ocean-atmosphere system and into meltwater feedbacks on the Southern Ocean. Other evidence points to the sensitivity of marine-based portions of East Antarctica to weaker climate forcing relative to today’s climate change, during the Last Interglacial Period and previous interglacials with warming of 1 to 2 degrees Celsius.

How quickly will the Antarctic Ice sheet melt in the future? The answer relies on developing coupled models that accurately capture the interactions between Earth systems.

One of the main questions is: How quickly will the Antarctic Ice sheet melt in the future? The answer relies on developing coupled models that accurately capture the interactions between Earth systems.

Observations will help inform on current and past climate trends – including detection and attribution of climate variability and change – grounding-truthing of model representation of ice dynamic processes, and interactions between Earth systems.

To address this problem, we need high resolution bathymetric data around Antarctic ice shelves, ongoing measurements of ocean state, improved estimates of past sea-level rise contributions from different sectors of the ice sheet, models that can capture ice shelf-ocean interactions, and the evolution of these systems through time.

In more specific terms, understanding Antarctic change depends on a detailed understanding of mass changes in East Antarctica, and how these will change due to climate warming. There are large variations in the observations of mass balance across East Antarctica, with some areas gaining mass and other areas losing mass. However, the detection and attribution of changes is difficult because there are large uncertainties in the mass balance estimates due to a paucity of observations needed to characterize variability and trends, and low signal to noise (low precipitation).

Other questions that remain open are: What is the impact of Antarctic meltwater on the climate? What are the feedbacks associated with Antarctic meltwater release on stratification in the upper Southern Ocean, sea ice, and subsurface ocean heat build-up, as well as on Southern Ocean overturning circulation and broader ecosystem response? What are the tipping points for rapid, irreversible ice mass loss? What are the coupled feedbacks between the ice sheet and other Earth systems (ocean, atmosphere, solid Earth) that may enhance or reduce ice mass loss? And how will solid Earth rebound modify the timescales of glacial retreat? Finally, the physical representation of ice flow in models relies on knowledge of the basal environment, which is difficult to observe and leads to further uncertainties in, for example, the role of subglacial hydrology in modifying ice dynamics.