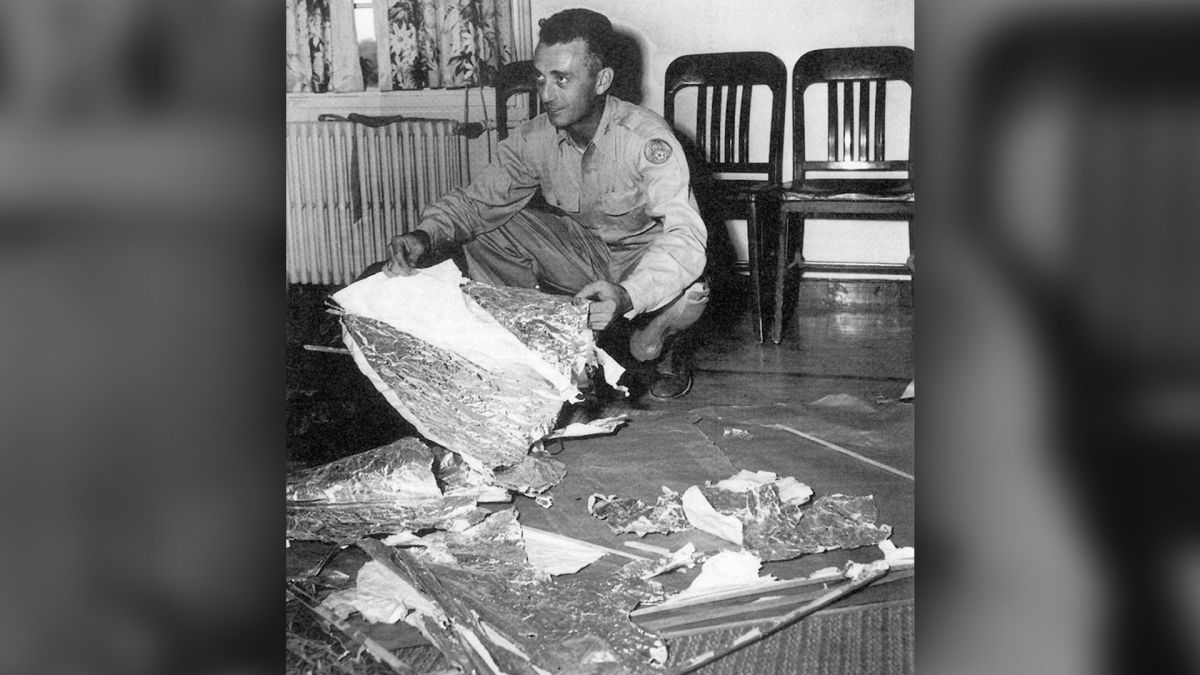 A long-hidden diary belonging to a U.S. intelligence officer has rekindled research into the Roswell Incident, the infamous UFO crash in Roswell, New Mexico, that took place more than 70 years ago.

When a mysterious object slammed into the desert near the Roswell Army Air Field (RAAF) in July 1947, Maj. Jesse Marcel, an RAAF intelligence officer, was sent to supervise collection of the debris. A press officer at the RAAF issued a statement on July 8 describing “the crash and recovery of ‘a flying disc,'” which many interpreted as evidence of alien contact. But the next day, another army official told reporters that RAAF officers had recovered a weather balloon, not a flying saucer.

Newspaper photos showed Marcel posing with pieces of what appeared to be a shredded high-altitude weather balloon with a radar reflector. But in the decades since, many have speculated about the military’s initial “flying disc” report, wondering if the wreckage was perhaps more unusual than the photos implied. Recently, Marcel’s family revealed that he had kept a diary from that period that might contain clues about the crash, sparking a new investigation by the History Channel in “Roswell: The First Witness,” part of the network’s “History’s Greatest Mysteries” series.

“The government claimed they had recovered a UFO — they had a press release about it,” said Ben Smith, a former CIA operative and the show’s lead investigator. “No other government in the world has said ‘We have a spacecraft,’ and then the next day there’s another press release that says, ‘Never mind, it was just a weather balloon’,” Smith told Live Science.

The show revisits the Roswell crash site, incorporating aerial surveys and mapping, and using multispectral imaging to detect micro-depressions in the ground that could indicate where debris landed, Smith said.

But the central component of the new inquiry is a diary, which Marcel supposedly kept during the time of the Roswell crash, and which is now in the possession of his grandchildren. Decades after the event, Marcel told an interviewer that he believed the object that crashed in the New Mexico desert had extraterrestrial origins, Time reported in 1997. Analysis of the diary — and translation of its cryptic language — could reveal coded messages that Marcel wrote about the crash at the time that it happened, Smith said.

Interest in UFOs hasn’t waned since the Roswell Incident — if anything, recent evidence has amplified it. In 2017 and 2018, U.S. Navy pilots recorded three encounters with fast-moving UFOs (also referred to as UAP, or unidentified aerial phenomena); the Navy officially declassified the videos in April of this year, Live Science previously reported. Also in 2017, a former Pentagon official confirmed the existence of a federal agency that had been secretly investigating UFOs since 2007, and which may still be active today.

But why do the events of Roswell still intrigue people?

“It’s the origin story of the UFO, the prospect of a government cover-up for alien contact,” Smith said. “Science fiction already existed but things that passed to us through pop culture found their origins in government secrecy surrounding this strange sequence of events in 1947,” he said.

“It all starts in Roswell.”