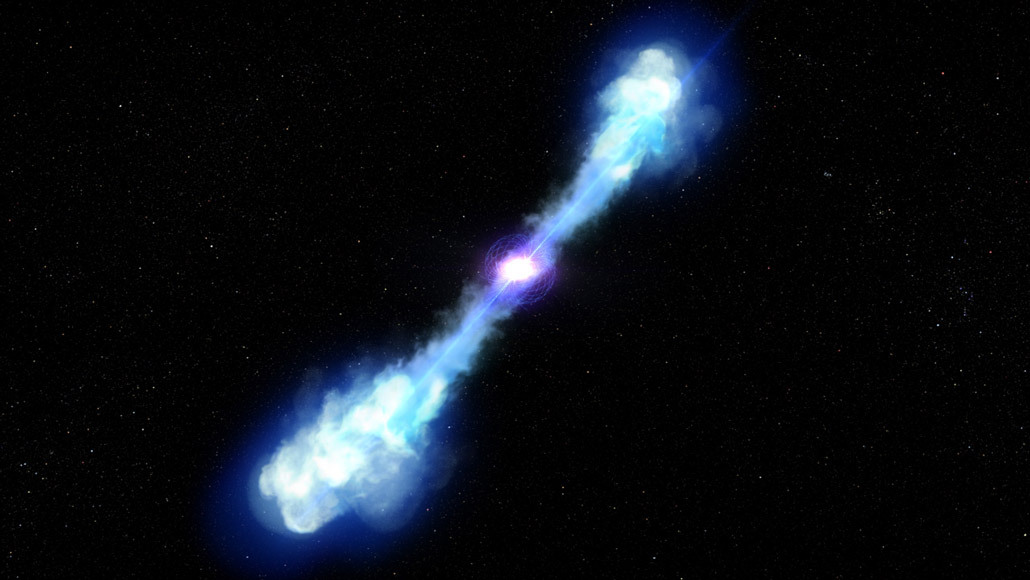 A surprisingly bright cosmic blast might have marked the birth of a magnetar. If so, it would be the first time that astronomers have witnessed the formation of this kind of rapidly spinning, extremely magnetized stellar corpse.

That dazzling flash of light was made when two neutron stars collided and merged into one massive object, astronomers report in an upcoming issue of the Astrophysical Journal. Though the especially bright light could mean that a magnetar was produced, other explanations are possible, the researchers say.

Astrophysicist Wen-fai Fong of Northwestern University in Evanston, Ill., and colleagues first spotted the site of the neutron star crash as a burst of gamma-ray light detected with NASA’s orbiting Neil Gehrels Swift Observatory on May 22. Follow-up observations in X-ray, visible and infrared wavelengths of light showed that the gamma rays were accompanied by a characteristic glow called a kilonova.

Kilonovas are thought to form after two neutron stars, the ultradense cores of dead stars, collide and merge. The merger sprays neutron-rich material “not seen anywhere else in the universe” around the collision site, Fong says. That material quickly produces unstable heavy elements, and those elements soon decay, heating the neutron cloud and making it glow in optical and infrared light (SN: 10/23/19).

Astronomers think that kilonovas form every time a pair of neutron stars merge. But mergers produce other, brighter light as well, which can swamp the kilonova signal. As a result, astronomers have seen only one definitive kilonova before, in August 2017, though there are other potential candidates (SN: 10/16/17).

The glow that Fong’s team saw, however, put the 2017 kilonova to shame. “It’s potentially the most luminous kilonova that we’ve ever seen,” she says. “It basically breaks our understanding of the luminosities and brightnesses that kilonovae are supposed to have.”

The biggest difference in brightness was in infrared light, measured by the Hubble Space Telescope about 3 and 16 days after the gamma-ray burst. That light was 10 times as bright as infrared light seen in previous neutron star mergers.

“That was the real eye-opening moment, and that’s when we scrambled to find an explanation,” Fong says. “We had to come up with an extra source [of energy] that was boosting that kilonova.”

Her favorite explanation is that the crash produced a magnetar, which is a type of neutron star. Normally, when neutron stars merge, the mega-neutron star that they produce is too heavy to survive. Almost immediately, the star succumbs to intense gravitational forces and produces a black hole.

But if the supermassive neutron star is spinning rapidly and is highly magnetically charged (in other words, is a magnetar), it could save itself from collapsing. Both the support of its own rotation and dumping energy, and thus some mass, into the surrounding neutron-rich cloud could keep the star from turning into a black hole, the researchers suggest. That extra energy in turn would make the cloud give off more light — the extra infrared glow that Hubble spotted.

But there are other possible explanations for the extra bright light, Fong says. If the colliding neutron stars produced a black hole, that black hole could have launched a jet of charged plasma moving at nearly the speed of light (SN: 2/22/19). The details of how the jet interacts with the neutron-rich material surrounding the collision site could also explain the extra kilonova glow, she says.

If a magnetar was produced, “that could tell us something about the stability of neutron stars and how massive they can get,” Fong says. “We don’t know the maximum mass of neutron stars, but we do know that in most cases they would collapse into a black hole [after a merger]. If a neutron star did survive, it tells us about under what conditions a neutron star can exist.”

Finding a baby magnetar would be exciting, says astrophysicist Om Sharan Salafia of Italy’s National Institute for Astrophysics in Merate, who was not involved in the new research. “A newborn highly magnetized, highly rotating neutron star that forms from the merger of two neutron stars has never been observed before,” he says.

But he agrees that it’s too soon to rule out other explanations. What’s more, recent computer simulations suggest that it might be difficult to see a newborn magnetar even if it formed, he says. “I wouldn’t say this is settled.”

Observing how the object’s light behaves over the next four months to six years, Fong and her colleagues have calculated, will prove whether or not a magnetar was born.

Fong herself plans to keep following up on the mysterious object with existing and future observatories for a long time. “I’ll be tracking this till I’m old and grey, probably,” she says. “I’ll train my students to do it, and their students.”