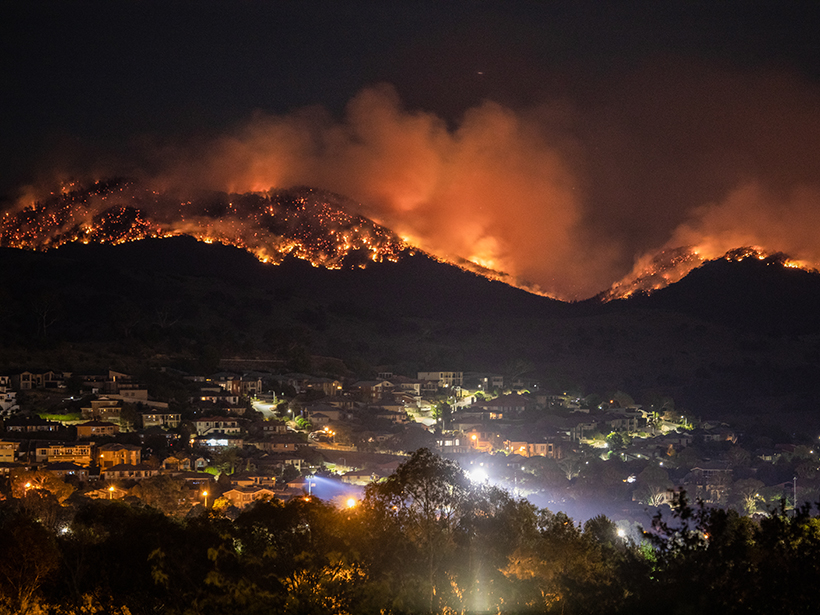 Bushfires are a natural part of Australia’s environment, but this past fire season was particularly catastrophic. It began early, at the end of the country’s hottest and driest year on record, in September 2019. By February 2020, fires had burned more than 12 million hectares, killing more than 1 billion animals and at least 33 people, and destroyed thousands of structures.

After the disastrous season, researchers are eager to pinpoint the factors that fueled the devastating flames. Previous research has established how local climatic and landscape conditions such as temperature, wind, humidity, fuel availability and moisture content, and slope affect the intensity and spread of bushfires. Some studies have already evaluated the contributions of several of these factors individually in the 2019–2020 bushfire season, but until now, no study had looked at their combined impacts in driving the record-breaking fires.

The analyses provide statistical support for previous work suggesting that prolonged drought, increased temperatures, and strong winds intensified the bushfire season. Although other studies have linked temperature, fuel moisture, drought, and wind speed to bushfire spread and intensity, the new study identified humidity, heat waves, and surface soil moisture as risk factors during the most recent season. It also showed a link between land cover type and fire risk: Native eucalyptus forests and grazing areas were more prone to bushfires than other landscapes. Altogether, the work provides a more complete picture of the causes of the extreme fire season.

Understanding the factors that drove past bushfires in Australia will help researchers and planners model and prepare for the fires of the future, the authors note. This help will become ever more important as climate change makes some conditions linked to fire more common in the region, including higher temperatures and more frequent and intense dry spells. (Earth’s Future, https://doi.org/10.1029/2020EF001671, 2020)