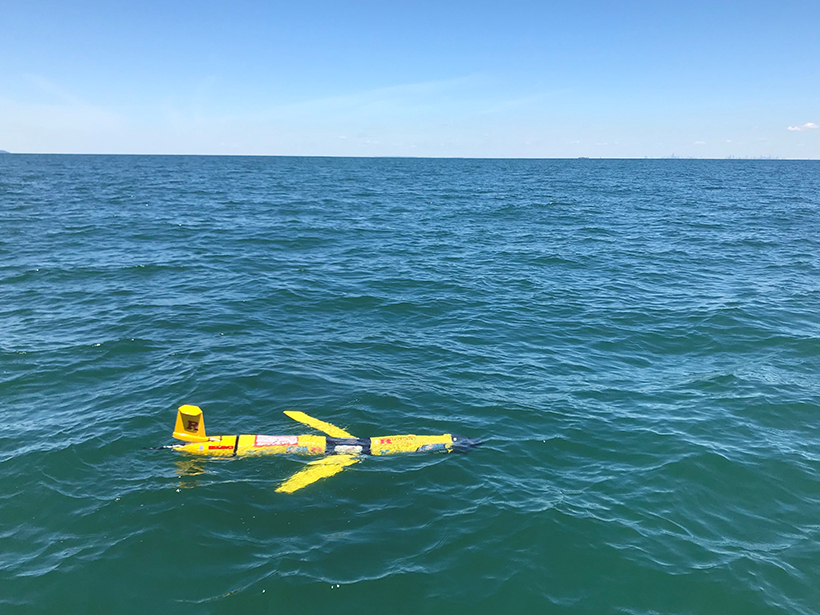 Since the Industrial Revolution began in the mid-18th century, Earth’s oceans have absorbed about one third of the carbon dioxide emitted through human activities. The ensuing roughly 30% increase in ocean acidity has reduced the amount of carbonate available for calcifying organisms such as corals and oysters to construct their skeletons and shells. As ocean acidity continues to climb, these biological structures could begin to dissolve or cost organisms extra energy to maintain, potentially disrupting marine food webs.

The rates at which the global ocean is acidifying are unprecedented, but the effects on coastal ecosystems, especially in economically important regions, are not well understood because of a lack of seasonal carbonate chemistry data. Wright-Fairbanks et al. report on an effort to help alleviate the data shortage using an underwater glider equipped with sensors to measure seasonal changes in ocean properties, including pH, temperature, dissolved oxygen, conductivity, and other parameters crucial to understanding local carbonate chemistry.

Between May 2018 and November 2019, the team deployed an autonomous Teledyne Webb Slocum G2 glider once per season, for a total of four missions, in the Mid-Atlantic Bight, the coastal region stretching from North Carolina to Massachusetts. The novel technology provided accurate, high-resolution measurements of seawater chemistry across the region.

The researchers detected the most acidic conditions in nearshore surface waters and in cold bottom waters; the least acidic conditions occurred farther offshore, near the edge of the continental shelf, during fall and winter. The findings underscore the importance of seasonality, as well as biological activity and freshwater inputs, for controlling carbonate chemistry in the Mid-Atlantic Bight, the authors noted. And they offer important baseline information for identifying drivers of ocean acidification—as well as strategies for fisheries management—in the Mid-Atlantic Bight, which hosts some of the United States’ most economically important recreational and commercial fisheries as well as ecosystems crucial for protecting coastal communities during storms.

The study highlights the potential of autonomous technology for obtaining high-resolution records of marine carbonate chemistry data at a lower cost than traditional shipboard studies and in more extreme locales like polar regions or stormy seas, according to the researchers. They note that this technology could also be scaled up to help address national and even global requirements for improving the scientific understanding of ocean acidification. (Journal of Geophysical Research: Oceans, https://doi.org/10.1029/2020JC016505, 2020)