Backing up a trailer is really hard, but this $100,000 SUV offers a new solution 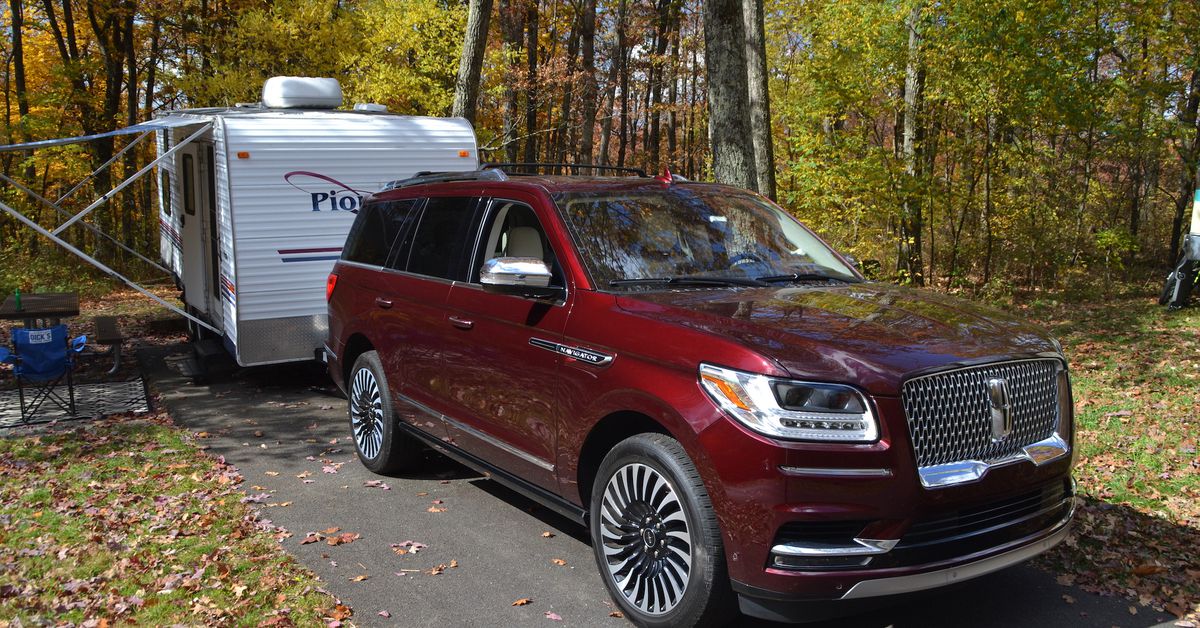 Getting a trailer into spots like these can be tricky, but new tech helps. (Dan Carney/)

If you’ve ever tried it, you know: Backing up a car with a trailer behind it is very, very hard.

But recently, we tested a new solution from Lincoln: a $100,000 Lincoln Navigator Black Label that features Pro Trailer Backup Assist technology. We rented a camping trailer via Outdoorsy.com to accompany it, so we could put the Navigator through the paces as a tow vehicle.

No one should feel embarrassed when needing a hand backing up a trailer, says Ford chassis control supervisor Don Mattern, who developed Pro Trailer Backup Assist. That’s because trailers resist efforts to back them in the intended direction. “It is a naturally unstable system,” he observes. “It is like an upside-down pendulum.”

The Navigator features the company’s first-generation version of the tech. It requires a bit of preparation work with a tape measure—measuring dimensions such as the distance from the tow vehicle’s bumper to the trailer’s axles—but starting with the 2021 Ford F-150 pickup, Ford and Lincoln full-size pickups and SUVs will start switching over to a system that automatically identifies the important measurements of the trailer.

Even with the new system, it will still be necessary to place a target sticker on the tongue of the trailer, as one has to do with the current system, so the camera can lock onto that spot to detect when the trailer is turning. But that is a simple procedure.

Nevertheless, the function of both systems after calibration is the same. The Navigator features a small dial on the dashboard that the driver turns in the direction they want the trailer to go, like a steering wheel for the trailer. The driver continues to operate the brake and throttle normally, but the system turns the Navigator’s steering wheel automatically.

It takes a little practice to get a feel for how much response results from input into that steering knob. And for experienced trailer backers who are used to doing it manually, there may not be a lot of benefit for simple jobs, like just sliding the trailer back into a parking space.

But the system is very good, especially for keeping that unstable setup under control for long back-ups. Plus, with no input into the trailer’s steering knob, Pro Trailer Backup Assist keeps the trailer tracking in a straight line while backing up, avoiding the potential for an abrupt jackknife when the trailer suddenly veers to the side and potentially slams into the towing vehicle.

The Navigator includes other towing-assistance technologies, such as an integrated trailer brake controller. That automatically applies the trailer’s electric brakes whenever you slow down to avoid overloading the truck’s own brakes. Traditional add-on aftermarket trailer brake control systems have to guess what is happening, and so they usually clamp down too hard at parking lot speeds, while not providing enough help when there’s a sudden backup on the highway.

The Navigator’s integrated system works so smoothly that it is invisible and helps make the trailer feel invisible, too. A leveling air suspension system helps with that too, automatically keeping the Navigator on an even keel when the Fleetwood camper is hitched up.

And there’s a welcome safety net called automatic sway control. Properly loaded and hitched trailers driven at prudent speeds do not tend to sway. But even trailers that aren’t too heavy in the rear or driven too fast can start to wobble on a downhill stretch or when a passing tractor-trailer’s wind blast shoves it to the side.

In our case, the weight-distributing hitch we got from the trailer’s owner was set up with the ball a little too high on our high-riding Navigator, so the trailer was borderline too high in the front, which also can instigate sway. We found that at reasonable speeds the camper was fine, though it wiggled occasionally on the downhills.

In those cases it is reassuring to know that the Navigator’s stability control system is there as a backup, ready to clamp down on the truck’s brakes individually to reign the trailer in if needed. Fortunately, we haven’t tested that system in action.

The view from the backup camera when hitching the Navigator to the trailer. (Dan Carney/)

The Navigator’s radar-controlled adaptive cruise control system makes it easy to set and maintain an appropriate speed on our highway miles to and from Virginia’s Shenandoah National Park, where we were camping. The 450-horsepower twin-turbocharged 3.5-liter EcoBoost V6 engine surely contributes to the Navigator’s ease holding the desired speed up hills and down. It probably also helped it score its second straight win as the top luxury SUV in the AutoPacific Vehicle Satisfaction Awards.

The engine is matched to a 10-speed automatic transmission. Carmakers are adding gear ratios to their transmissions at a frantic pace, but really, there is no huge advantage in regular driving over a vehicle with half as many speeds. Modern direct-injected, turbocharged engines like the Lincoln’s EcoBoost eke out their efficiency advantage over conventional engines only when run in a very narrow RPM band, and these many-speed transmissions help keep them running in that efficiency sweet spot.

However, we found that while towing the trailer, the 10-speed is great in its role using engine braking to reign in vehicle speed on downhills. The Navigator automatically switches to its tow/haul mode when the trailer is plugged in, and among other things, this causes the transmission to downshift aggressively on downhills so that the engine can provide braking and save the brakes until they are needed for the real work.

With fewer gears, these downshifts can be jarring in other vehicles. In the Navigator, the small differences between its many gear ratios keep the down-changes subtle and smooth, in keeping with the big luxury SUV’s overall character.

That power comes at a cost. The EPA rates the Navigator at 18 mpg in combined driving, but pulling the camper we get just half that. What that means is that you’ve got half the usual driving range. If you’re going somewhere very remote, you’ll use twice as much gas as usual getting there and need twice as much getting back from a place where gas stations are likely to be few and far between. You’ll want to top off the tank when you reach the edge of civilization so that you aren’t in the position of trying to return on fumes.

The Navigator has other amenities that assist with life in the boondocks. Cellular reception varies between “poor” and “none” at places in Shenandoah National Park, so having a Wi-Fi hotspot built into the vehicle can make the difference between getting a connection and not. That’s because the car-based device has a bigger antenna and transmits with much more power than a smartphone does.

It also pays to remember to charge your devices before you go camping and to charge your portable battery packs, too. Don’t assume things will work just because they should; actually test everything before you go, lest you discover that your boombox batteries have corroded and left you without campsite tuneage.

Some campgrounds provide connections for your camper to plug in to the electric power grid, water supply, and sewer line. Our national park campground did not. This is when it helps to get a site near to the bathroom building.

Also, some campers include generators to provide power when there are no hook-ups, but remember that campgrounds may have limited hours when those generators can run. And if you went to the woods for some peace and quiet, you’re probably going to want a site in a generator-free part of the campground, where they’re not allowed at all. You didn’t flee the drone of weed whackers and leaf blowers just to hear the drone of generators powering your neighbor’s TV so he can watch a marathon of The Office.

When it comes time to leave, hitching the trailer back up to the Navigator is a snap, thanks to the backup camera that provides alignment reticles, like those on a gun scope, that make it easy to bullseye the target when placing the hitch ball directly beneath the trailer’s receptacle.

It’s a great time to go camping, too. The getaway was rated as the safest travel option by consumers surveyed by the Cairn Consulting Group for Kampgrounds of America, finishing far ahead of resorts, hotels, Airbnb and air travel. And nearly half of people who had done tent camping expressed an interest in using a recreational vehicle, like the 18-foot Fleetwood trailer we rented from a private owner. Newcomers to RV camping might appreciate a little help shepherding their borrowed house into its campsite when they reach their destination, which spurred our interest in the Lincoln’s Pro Trailer Backup Assist.

The verdict? We found that the feature delivers on its promise of taking the stress out of backing that trailer into your campsite, which should let trailer-towing newbies feel more confident in renting a camper and heading to the great outdoors. And trailer-towing veterans might find the technology cool enough to devise challenges for themselves to see what new things they can do even better with a little bit of digital help.