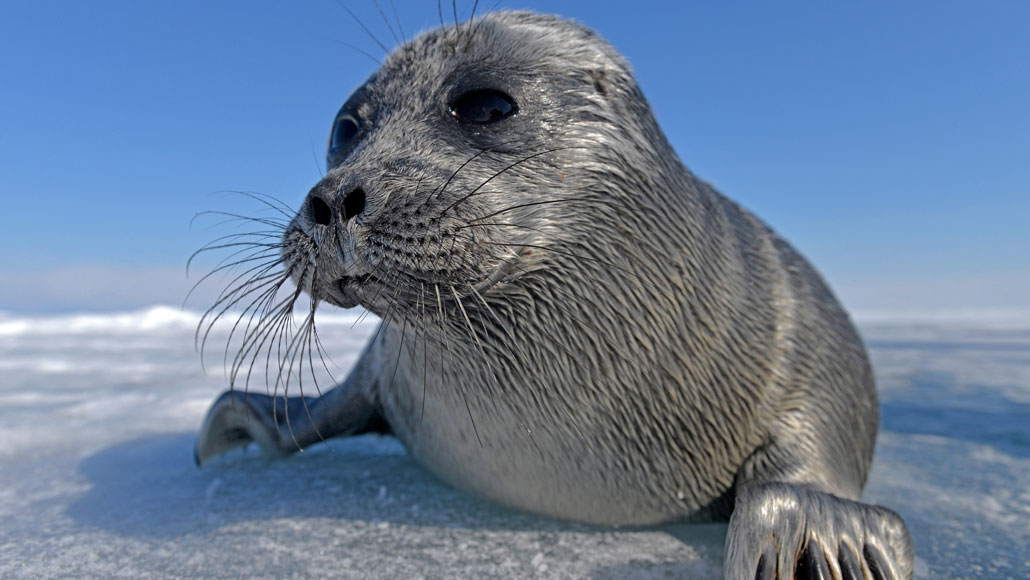 Baikal seals are fans of bite-sized portions, and this dietary quirk may be why the seals are thriving.

The research suggests that Baikal seals (Pusa sibirica) use a combination of special teeth, speed and skill to gobble up dozens of inch-long critters called amphipods on a single dive, scientists report November 16 in the Proceedings of the National Academy of Sciences.

Typically, seals eat fish and mollusks, though some southern seals, like crabeater seals (Lobodon carcinophaga), are honed eaters of krill, another type of small crustacean. For the Baikal seals, there may be big benefits to hunting amphipods. The crustaceans “are very predictable,” says marine biologist Yuuki Watanabe at the National Institute of Polar Research in Tokyo. “They form big aggregations, and they come to the surface in the nighttime.”

Exploiting such a dependable food source low in the food chain, Watanabe says, may make Baikal seals more resilient than other seals to human-driven environmental impacts such as warming temperatures (SN: 5/1/17).

As many as 115,000 P. sibirica seals populate Lake Baikal, and the species is listed as “least concern” by the International Union for Conservation of Nature. This is far more abundant than seals in similar lake habitats — like the ringed seals of Lake Ladoga in northwestern Russia and Lake Saimaa in Finland, which together number a few thousand.

Watanabe has studied Baikal seals since 2003. Back then, he had evidence from depth-measuring devices mounted on the seals that showed that they reliably shifted their diving depths through the night, suggesting the animals might be following a particular food source.

And previous records of seals’ stomach contents had showed that the animals were at least occasionally eating amphipods, which make daily migrations from the depths to the shallows and back again. So in June 2018, Watanabe returned to Lake Baikal, the world’s largest and oldest freshwater lake, to see if he could gather direct evidence that the seals were feeding on swarms of amphipods.

Watanabe and colleagues caught eight seals and attached cameras and accelerometers to their backs, recording what the seals were eating, how fast they were swimming and their diving depths. The team found that the seals were rapidly snatching up individual amphipods on their night dives, as many as 154 in one descent and catching an amphipod every 2.5 seconds.

Over a single day, the seals are estimated to make thousands of catches. All those snacks add up. Based on Watanabe and colleagues’ estimations, Baikal seals may be getting about 20 percent of their daily calorie requirements just from amphipods.

When Watanabe examined Baikal seal skulls in museum collections and compared the skulls with those of other seals, he noticed the cheek teeth of the Baikal animals have folded margins that give the teeth a comblike shape with longer, more developed prongs than any other northern seal species. Baikal seals may be using these teeth to efficiently sieve their plankton prize from the lake, expelling excess water with every gulp, the researchers say.

Mia Wege, a marine ecologist at the University of Pretoria in South Africa, was surprised such small prey could form a major part of the diet of a seal.

The size of the freshwater amphipods that Baikal seals eat, she says, “is much smaller than other krill or amphipod species consumed by seals.” That makes sense though because the Siberian seals themselves are among the smallest seal species, with bodies that can run on less fuel, Wege says.

In the future, Watanabe wants to conduct feeding experiments to confirm how the seals are using their comblike chompers. He also wants to study the animals’ winter diet, since he thinks amphipods may be gathering underneath the lake’s winter ice, potentially providing a reliable, dense feast for hungry seals. Determining how seasonal ice cover influences the seals’ food sources is of increasing importance, says Watanabe, since the lake’s winter ice is waning due to climate change.