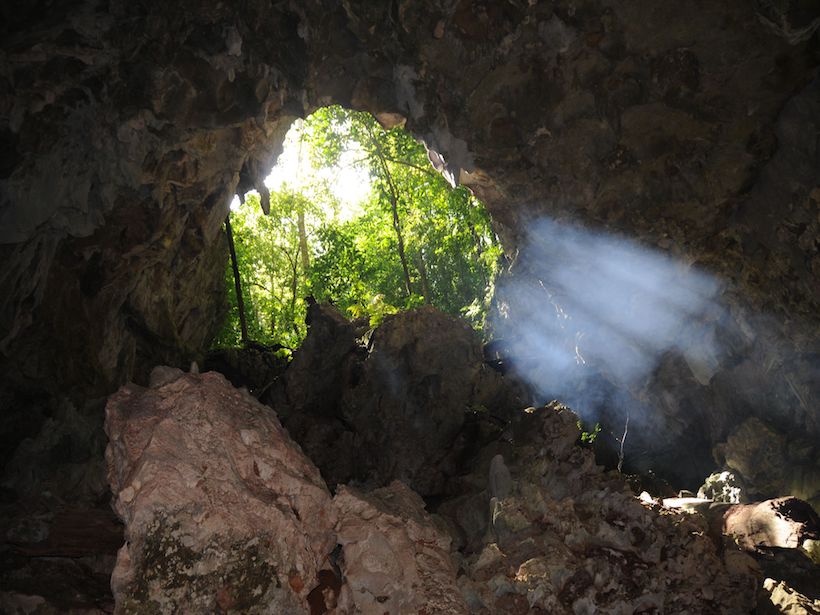 Ice cores and tree rings are natural record keepers. Now, researchers have used a complementary but potentially stinkier data set—bat guano—to peer into the past. After analyzing bits of pollen in excrement found in two caves in Jamaica, scientists believe they’ve pinpointed changes in agricultural production and hurricane activity.

On two separate occasions in 2012, Wieslaw Bogdanowicz, a zoologist at the Polish Academy of Sciences, and his colleagues met in Jamaica. Each time, they loaded up with spelunking equipment and hiked for hours through jungle-like terrain to reach two caves. That’s when the real fun began: The team put on climbing gear and rappeled tens of meters into each underground world. “It’s straight down,” team member Stefan Stewart, founder of the Jamaican Caves Organisation, said of one cave.

Bogdanowicz and his colleagues visited Schwallenburgh Cave in northern Jamaica and Home Away from Home Cave in the interior of the island. Both of these caves have been explored only a handful of times because they’re so remote and require technical climbing equipment, said Stewart.

Inaccessibility Is a Boon

“Many of the deposits have been destroyed.”

The relative inaccessibility of these two subterranean systems is a boon to science. It ensures that their extensive deposits of bat guano—measuring over 120 centimeters thick in some places—have remained largely unmolested by humans. The excrement, with its high levels of nitrogen, is commonly mined for fertilizer, said Donald McFarlane, a cave ecologist at the Claremont Colleges’ W. M. Keck Science Department in Claremont, Calif., not involved in the research. “Many of the deposits have been destroyed.”

Bat guano, which builds up over time thanks to roosting bats, is valuable to science. Like ice cores and tree rings, it can provide a record of past environmental conditions. That’s because guano reflects the plants, water, and insects that bats consume, the chemistry of which can shift with changing climatic conditions.

Roughly 3,000 insect-, nectar-, and fruit-eating bats occupy Home Away from Home Cave, a census conducted in 2008–2009 revealed. (The bat population in Schwallenburgh Cave hasn’t been surveyed.) A single bat excretes about 20 millimeter-scale pellets of feces each day, and a colony’s cumulative production of guano can be downright prodigious: Bracken Cave, in Texas, contains piles of guano topping 17 meters.

“We had something like 20 kilograms of guano from each cave.”

In both Schwallenburgh Cave and Home Away from Home Cave, the researchers used a metal tray to scoop out roughly 1-centimeter-thick layers of guano, which they then bagged individually. They collected roughly 80 bags from Schwallenburgh Cave and 130 bags from Home Away from Home Cave. It was a sizable haul of guano in total, Bogdanowicz said. “We had something like 20 kilograms of guano from each cave.”

Back in the laboratory, Bogdanowicz and his colleagues age dated 20 layers of guano from Schwallenburgh Cave and 28 layers from Home Away from Home Cave using a combination of 14C dating and 210Pb dating. They interpolated between the dated guano deposits to construct an age curve for each cave.

Schwallenburgh Cave’s deepest guano deposits were excreted roughly 200 years ago, the scientists found, and Home Away from Home Cave’s deposits traced back roughly 4,300 years. (Jamaica’s first inhabitants, the Taino, arrived on the island about 2,500 years ago.)

Bogdanowicz and his collaborators used a microscope to examine pollen grains and fungal spores within the guano. They found evidence of deciduous trees, shrubs, grasses, and cultivated crops like citrus, coffee, and cacao. This palynological record tracks agricultural changes, the researchers proposed. For instance, a decrease in coffee pollen in the early 19th century reflects decreased coffee production, a change most likely linked to international trade being reduced by the Napoleonic Wars (1799–1815), Bogdanowicz and his team suggested.

Guano can also imprint environmental changes like hurricane activity, the researchers proposed. Bogdanowicz and his collaborators measured a large uptick in mangrove pollen in the early 19th century, a change they attributed to two known hurricanes in 1804 that likely transported coastal vegetation inland. The scientists also noted similar increases in mangrove pollen that they suggested are due to hurricanes known to have occurred in 1903, 1909, 1935, 1951, and 1988, they reported last month in Quaternary International.

These findings are intriguing but should be taken with a grain of salt, said Bogdan Onac, a paleoclimatologist at the University of South Florida in Tampa not involved in the research. That’s because other events, like fields being cleared for agriculture or large fires, can also manifest as changes in pollen, he said. Conclusively pinning the blame on hurricanes might be premature, said Onac. “It’s a little bit tricky just based on pollen to really, really be sure that’s the case.”