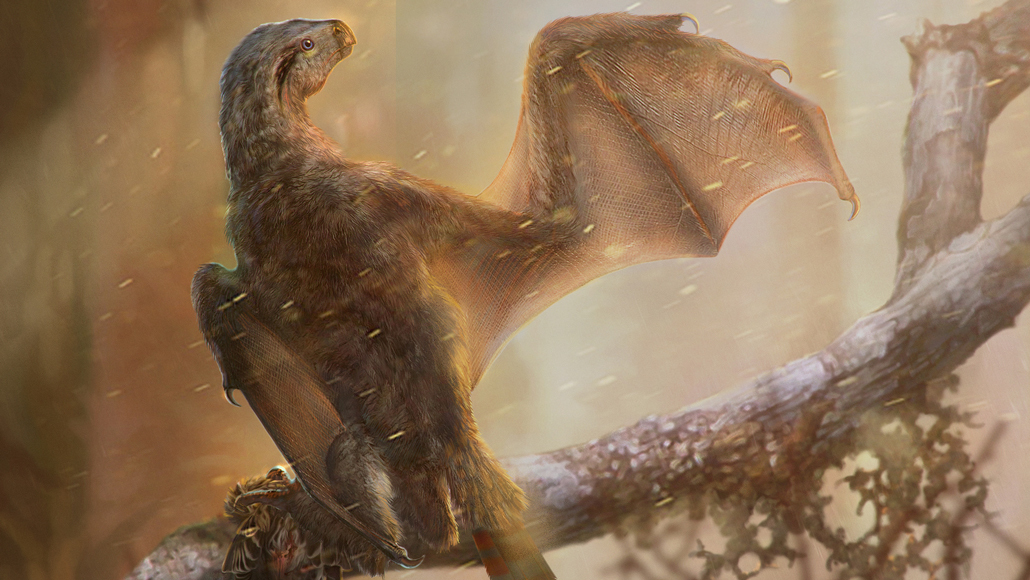 Only two dinosaur species are known to have had wings made out of stretched skin, like bats. But unlike bats, these dinos were capable of only limited gliding between trees, a new anatomical analysis suggests. That bat-winged gliding turned out to be a dead end along the path to the evolution of flight, researchers say.

“They are a failed experiment,” says Alexander Dececchi, a paleontologist at Mount Marty University in Sioux Falls, S.D.

Fliers with feathered wings, rather than membranous wings, begin to appear in the fossil record just a few million years after the bat-winged dinosaurs. Those feathered fliers may have outcompeted the gliders in their evolutionary niche, Dececchi and colleagues suggest October 22 in iScience.

Yi qi and Ambopteryx longibrachium were crow-sized dinosaurs that lived about 160 million years ago (SN: 4/29/15). They were distant cousins, both belonging to a bizarre group of dinosaurs known as scansoriopterygids. Unlike other scansoriopterygids, however, these two species sported large wings with membranes, thin skin stretched between elongated arm bones.

Scansoriopterygids were a branch of theropod dinosaurs, the same group that includes giants like Tyrannosaurus rex as well as the ancestors of birds. So the recent discoveries of two different bat-winged theropod dinosaurs shook up long-standing ideas about the evolution of flight in birds. Scientists had thought that path, while a bit circuitous, centered around variations of just one basic, birdlike body plan.

But whether Yi and Ambopteryx were actually adept at flying, such as being able to launch from the ground or flap their wings, wasn’t clear. To assess the dinos’ flight capability, Dececchi and colleagues used laser-stimulated fluorescence imaging, which can pick up details of soft tissues such as membranes or cartilage in fossils, to reanalyze the anatomy of Yi and Ambopteryx. The team made new estimations of the reptiles’ weight, wing shape and wingspan, and then simulated how those features might translate into flapping, gliding or launching.

The new analyses confirm that these two dinosaurs had vastly different wing structures from the feathered-wing fliers — proving that these two flight strategies evolved independently of one another. Yi and Ambopteryx, for example, had elongated forelimb bones between their membranous wings, as well as a special wrist bone to help support the membrane. The skeletons of the wings of birds, on the other hand, consist of elongated metacarpals, similar to finger bones.

This evolutionary branching out was ultimately a failure, Dececchi says. Yi and Ambopteryx were capable only of gliding short distances from tree to tree, the team found. Their body mass-to-wing ratio was a bit too high for them to stay aloft to glide longer distances.

As for active flight, the dinosaurs lacked other attributes possessed by powerful fliers, whether feather-winged like birds or membrane-winged like pterosaurs and bats. For example, the orientation of the dinosaurs’ wings suggests that they weren’t designed for rotational flapping. And the dinos’ breastbones show no evidence of places where key flight muscles attach in modern birds (SN: 3/13/18).

Just a few million years after Yi and Ambopteryx, about 150 million years ago, the ancient bird Archaeopteryx appears in the fossil record. Although Archaeopteryx wasn’t a particularly great flier either, Dececchi says, it was a stronger glider and possibly could flap its wings a bit. Later variations on its body theme continued to improve dinosaur’s flight ability, he says.

That the bat-winged dinosaurs weren’t great fliers isn’t a surprise, says paleontologist Jingmai O’Connor of the Chinese Academy of Sciences in Beijing, who with her colleagues described Ambopteryx in a 2019 study in Nature. O’Connor notes that no bat-winged dinosaurs appear in the fossil record after the Jurassic Period, so it already seemed likely that they weren’t a successful group of dinosaurs. Still, she says, it’s important to do this kind of careful, quantitative analysis to assess flight ability — although “the fossil record of this group is really bad.” With so few fossils, many poorly preserved, any such calculations are going to be based on “very poor data.”

O’Connor says that what the animals do highlight is “the experimentation with different modes of flight,” she adds. Birds, it’s clear, weren’t the only flying dinosaurs — and these fossils reveal that flight itself, whether gliding or powered, evolved multiple times among them.