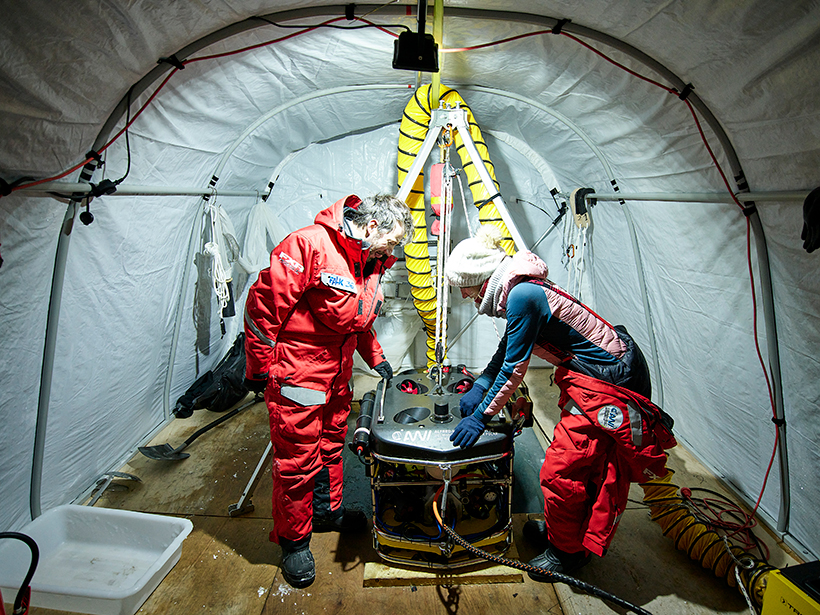 Starting last year, scientists floated through the Arctic Ocean on an icebreaker and measured the ocean, atmosphere, and sea ice in unprecedented detail. Aboard the ship was a remotely operated vehicle (ROV) nicknamed Beast, which was capable of diving beneath the ice and going on expeditions of its own.

Christian Katlein, a sea ice physicist at the Alfred Wegener Institute in Bremerhaven, Germany, operated Beast. Katlein was one of the hundreds of researchers to join the Multidisciplinary Drifting Observatory for the Study of Arctic Climate (MOSAiC), which just wrapped up this past October and was the largest polar expedition to the central Arctic in history.

Beast had a busy year, and Katlein has only begun to comb through the data collected during the ROV’s more than 80 dives beneath the ice. Here are a few snapshots from its expedition north.

“The main goal of these ROV dives was really to, for the first time, investigate the under-ice environment throughout an entire year in the central Arctic,” said Katlein. “We are still discovering new things.”

ROVs have swum in the Arctic before, but only briefly, on expeditions that would last a few months. Beast, on the other hand, dove for an entire year, sometimes twice per week, as the icebreaker drifted more than 3,000 kilometers through the Arctic.

Katlein and other members of the ROV team piloted Beast from a heated tent set up on the sea ice near the icebreaker. Beast descended through a hole cut into the sea ice nearby, slipping into freezing waters. Outside, a member of the party would watch for polar bears.

The ROV glided just beneath the underside of the sea ice, taking pictures and video, as well as a suite of scientific measurements with its sensors and robotic arm. The rover’s 300-meter orange cable would fade as it descended into the soft blue light.

Beast stayed busy: It suctioned algal communities off the ice, measured the light filtering through young and old ice, and caught zooplankton in nets. It also sampled nutrients, salinity, dissolved oxygen, and temperature of the ocean water.

Beast had so many sensors attached to its frame that the manufacturer asked if the team wanted to drown the ROV, said Katlein. Its burly payload inspired its name.

As the first team to send an underwater robot beneath the ice during Arctic winter, the scientists made their first discovery quickly: They found a type of ice that was thought to grow a world away in Antarctica.

Platelet ice, feathery ice crystals that form at supercool temperatures and grow as large as a human hand, is often associated with melting ice shelves in Antarctica. It hadn’t been seen much in the Arctic, particularly during winter, but the team discovered it “almost everywhere,” said Katlein.

“Nobody had ever observed such a widespread coverage in the central Arctic.”

The glimmering crystals would appear on any available surface, including Beast, if the ROV stayed docked in the water overnight.

Although the discovery does not affect scientists’ big questions about sea ice melt, it is evidence that mysteries remain hidden.

“Nobody had ever observed such a widespread coverage in the central Arctic, probably because nobody ever had the means to actually look,” Katlein said.

For an up-close look, Beast collected platelet ice using zooplankton nets and brought it to the surface for analysis.

This photograph shows a thin section of platelet ice crystals with rainbow colors showing the different orientations of the crystals in space. The effect comes from photographing the sample between crossed polarizing filters.

One unusual aspect of platelet ice is how large the crystals are. This photograph is approximately 10 centimeters wide (about the height of a soda can), and the crystals stretch several centimeters each. The team found one crystal 15 centimeters long, equivalent to the length of a dollar bill.

Beast also 3D scanned the underside of the ice floe to understand its geometry. Much like a ship mapping the ocean floor, Beast used multibeam sonar to create an upside-down view of the ice. These images can be compared with the aboveground laser scans to better understand how ice can be measured with remote sensing.

“Until a few years back, we assumed that in the polar night, nothing was alive under the ice. And basically, everything was just in a state of hibernation,” said Katlein. But now researchers know that even in the central Arctic, far from land and stranded on the sea ice, life goes on. Polar bears hunt seals that hide in pressure ridges. Arctic cod feed on tiny crustaceans. Beast had a few run-ins with local wildlife while exploring, including seals and this Arctic cod flittering by.

Now, Before It’s Too Late

Beast dove for over 300 hours, providing the first extensive and continuous measurements from an ROV under the ice.

Yet just as scientists are getting the first peek at the Arctic, the environment is changing before their eyes. Air temperatures were 10℃ warmer during the MOSAiC expedition than they were 125 years ago during Fridtjof Nansen’s historic Fram expedition. The poles of Earth are warming 2 to 3 times faster than the rest of the globe.

That’s why data from Beast are so critical, said Katlein. “We know things are changing. It’s very obvious. But if you don’t know the base state, then it’s really hard to describe what is going on.”