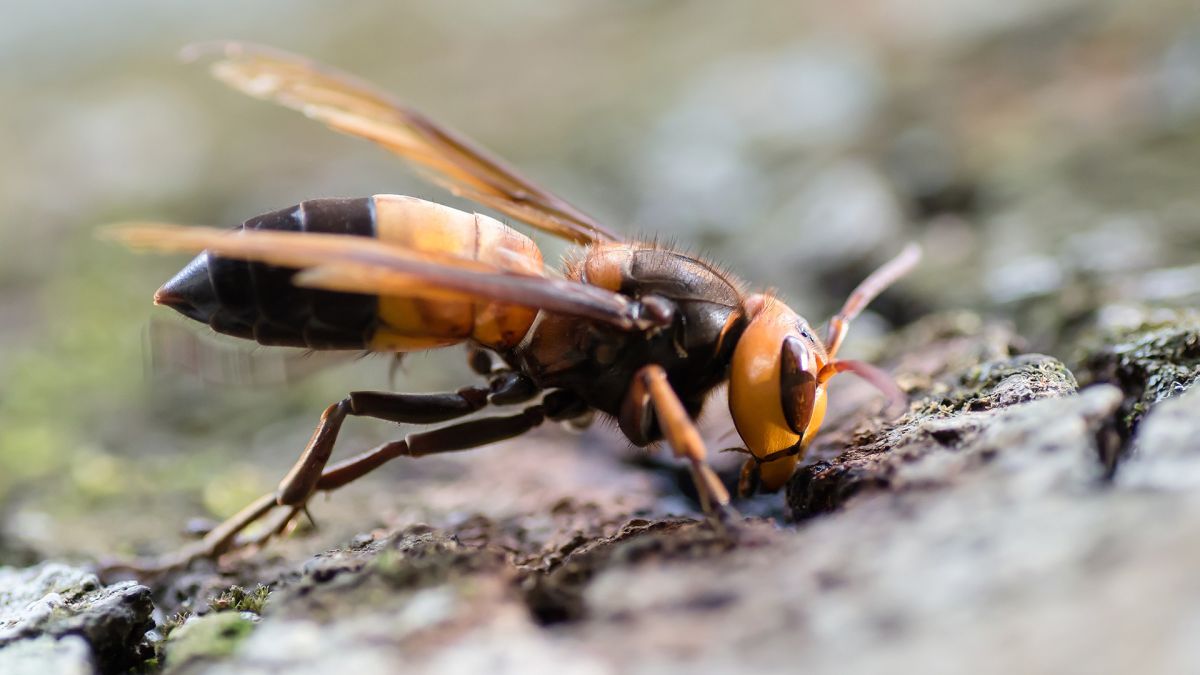 Giant hornets such as the enormous “murder hornet” and others in the Vespa genus, are highly aggressive and deadly beehive invaders. However, Asian honey bees can defend themselves against these insect predators by smearing animal feces around the hive entrance.

When giant hornets target a beehive, they attack as a group and overwhelm the colony. But Asian honey bees (Apis cerana) that are under attack by the giant hornet Vespa soror, a close relative of the murder hornet Vespa mandarinia, can often prevent hornet attacks by collecting and applying animal waste to their doorways, new research finds.

This poop defense is “next level” for honey bees, which typically rely exclusively on plants for everything they need to survive, said Heather Mattila, an associate professor in the Department of Biological Sciences at Wellesley College in Wellesley, Massachusetts, and lead author of a new study on this unusual bee behavior.

Asian honey bees, which are about 0.4 inches (10 millimeters) long, are dwarfed by giant hornets; V. soror workers measure up to 1.4 inches (35 mm) in length. Like their murder hornet cousins, V. soror hornets are also orange-and-black striped with orange heads, and they share their cousins’ bee-killing habits. Giant hornets usually hunt individual bees, but at the end of their breeding season — when the hornet brood is at its most numerous and there are lots of hungry mouths to feed — worker hornets start attacking beehives as a group, Mattila said.

As the study authors observed hornet behavior at apiaries in Vietnam, they saw worker hornets rubbing their abdomens on the bees’ hives “and on trees above the hives,” Mattila said. “The presumption is that the [hornet] nestmates are following a chemical trail.”

If a hornet army followed that scent to a beehive, the carnage was swift and terrible. Adult bees were slaughtered, and any survivors abandoned the hive, leaving their helpless young behind as an all-you-can-eat takeout buffet for the hornets to ferry back to their hungry hornet youngsters, Mattila said.

But Asian honey bees have a few defenses against these giant predators. They can deter hornets by hissing at them, or by gathering in a group and threateningly waggling their abdomens. Bees can also kill a hornet collectively as a “bee ball,” mobbing an invader until it suffocates or is cooked to death by the bees’ body heat. Asian honey bees are also very quick fliers — “they zig and they zag all over the place” — which helps them evade capture by the slower hornets, Mattila said.

And now, scientists have discovered one more defense — animal poop.

For the study, Mattila and her colleagues observed apiaries in Vietnam, and of 67 beekeepers who raised Asian honey bees in wooden hives, 94% said that most of those hives had fecal spotting near the entrance.

The researchers saw that if a hive was visited by giant hornets, the bees responded by collecting bits of solid waste from nearby chicken coops and mammal dung piles and returning with the clumps to the hive. They then applied the dung in tiny mounds that they shaped with their mandibles.

The poop defense was a solid one. Hives with lots of fecal spotting had fewer visits from giant hornets, which seemed unwilling to chew on or rub up against poop-covered entrances. Hives that the bees anointed with poop were never successfully overrun by giant hornets, according to the study.

“The only time we saw it get to the point where a colony absconded — which is what you call it when they abandon their home — was when we really made it hard for them to defend themselves and opened the entrance so the hornets could get in,” Mattila said. The bees then formed “bee balls” that killed some of the invaders, but ultimately the bees abandoned their home because “they couldn’t stop the attack,” Mattila said.

Anecdotal reports that the researchers collected from Bhutan, southeastern China, Nepal, Thailand and Vietnam described fecal spotting on beehives; as these locations are also within the range of V. mandarinia, it’s likely that bees use the spotting defense against mass attacks by murder hornets too, the researchers wrote.

One missing puzzle piece is the fecal ingredient that deters giant hornet attacks. It could be that the waste odor is simply very unpleasant to hornets, or that it masks the chemical scent that they use to “tag” the hive for their nestmates, Mattila said.

“We have a lot of ideas still to explore — it’s a pretty big open question at this point,” she added.

The findings were published online Dec. 9 in the journal PLOS One.