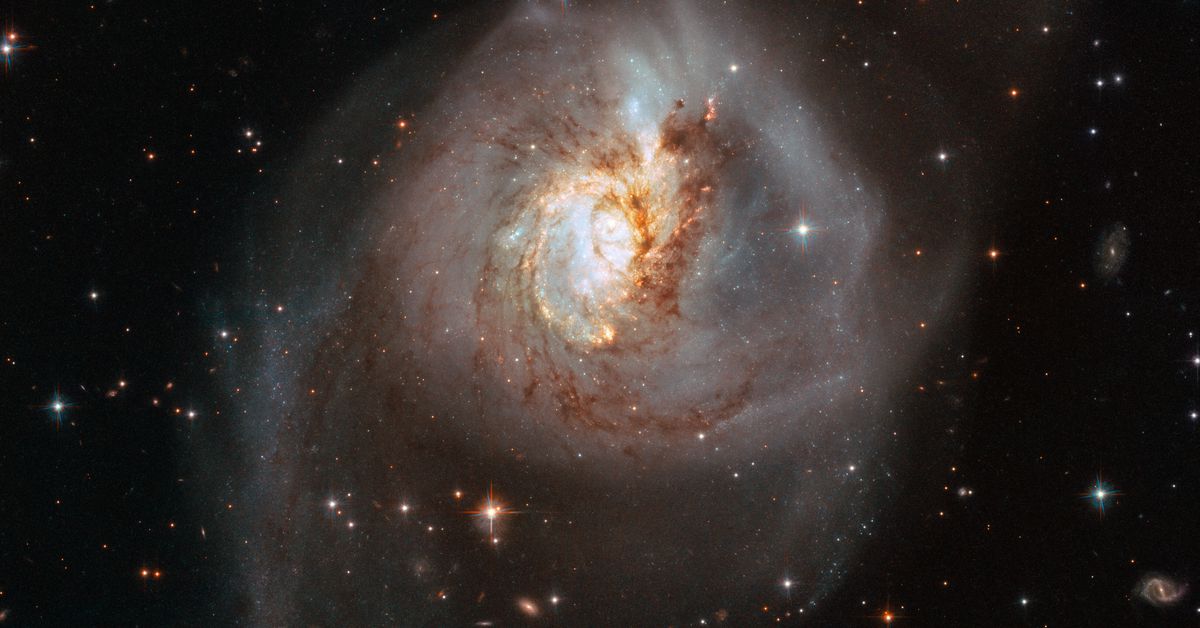 The peculiar galaxy NGC 3256, pictured above, is about 100 million light-years from Earth and is the result of a past galactic merger, which created its distorted appearance. (ESA/Hubble, NASA/)

To ring in the new year, NASA and the European Space Agency (ESA) dropped six captivating images of galaxies smashing into one another. The vistas were taken by the Hubble Space Telescope as part of the recent HiPEEC (Hubble imaging Probe of Extreme Environments and Clusters) survey, a project that aims to study how fast stars can form in systems like these.

Mergers like the ones depicted aren’t very common, and they’re quite valuable for learning more about how stars are born. “These systems are excellent laboratories to trace the formation of star clusters under extreme physical conditions,” ESA said in a statement.

When these rare collisions happen, shockingly dense and bright patches of stars crop up—you can see those bright spots in this collection of images, almost as if they’re glimmering badges of honor born from violent mergers. For comparison, here in the Milky Way, these bright patches known as star clusters pop up with masses that are 10 thousand times that of our Sun. But in these energy-packed galactic collisions, the clusters can clock in at millions of times the mass of our Sun.

And those super luminous clusters stick around. As the ESA puts it, “even after the collision, when the resulting galactic system begins to fade into a more quiescent phase, these very massive star clusters will shine throughout their host galaxy, as long-lasting witnesses of past merging events.”

By observing these clusters with ultraviolet and near-infrared cameras, Hubble scientists can discern their ages and masses, which helps them understand how quickly or slowly stars form there. It’s just one piece of the puzzle when it comes to understanding how star systems are born as a whole.

You can check out all of the collisions below, and older images of colliding galaxies captured by Hubble here.

Located 200 million light-years from earth, the galaxy system NGC 1614 has an extra bright center. It can be found in the constellation of Eridanus, known as the River. (NASA, ESA, the Hubble Heritage Team (STScI/AURA)-ESA/Hubble Collaboration and A. Evans (University of Virginia, Charlottesville/NRAO/Stony Brook University)/)

This galaxy is known as the Medusa merger—or the less exciting name, NGC 4194. It formed when a young galaxy consumed a smaller gas-rich system and threw out streams of stars and dust into space. Those streams resemble the writhing snakes that Medusa, a monster in ancient Greek mythology, had on her head in place of hair. The Medusa merger is located about 130 million light-years away in the constellation of Ursa Major (The Great Bear).  (ESA/Hubble & NASA, A. Adamo/)

This system consists of a pair of galaxies, dubbed IC 694 and NGC 3690, which made a close pass some 700 million years ago. As a result of this interaction, the system underwent a fierce burst of star formation. In the last fifteen years or so six supernovae have popped off in the outer reaches of the galaxy, making this system a distinguished supernova factory. (NASA, ESA, the Hubble Heritage Team (STScI/AURA)-ESA/Hubble Collaboration and A. Evans (University of Virginia, Charlottesville/NRAO/Stony Brook University)/)

Located in the constellation of Hercules, about 230 million light-years away, NGC 6052 is a pair of colliding galaxies. (ESA/Hubble & NASA, A. Adamo et al./)

NGC 34 lies in the constellation Cetus, or “The Sea Monster.” This image shows the galaxy’s bright center, a result of a galactic collision that created a burst of new star formation and lit up the surrounding gas. (ESA/Hubble & NASA, A. Adamo et al./)