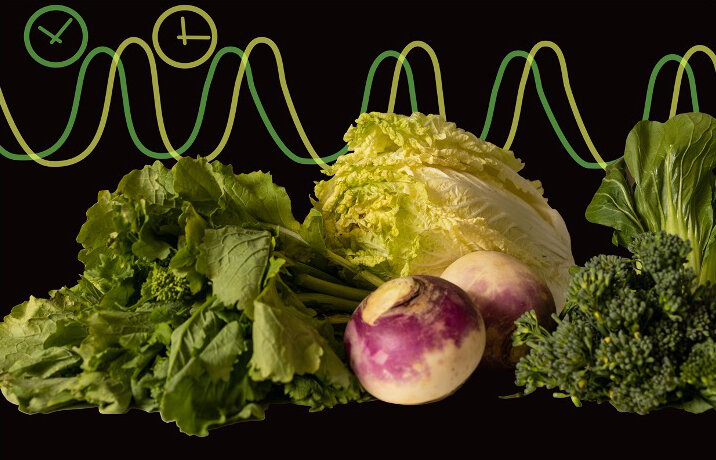 The biological clock of a popular food crop controls close to three-quarters of its genes, according to research from Dartmouth College.

The genetic research shows how the crop uses internal responses to the day-night cycle—known as circadian rhythms—to regulate processes such as reproduction, photosynthesis and reactions to stressful conditions.

The study, published in the journal eLife, can help researchers target genes to improve growth and stress resilience when a plant is moved to a new region or encounters changing climate conditions.

“As plants are cultivated in new geographic zones they must select traits that enable them to survive in different conditions,” said C. Robertson McClung, a professor of biology at Dartmouth and senior researcher on the study. “Many of these traits are in circadian clock genes.”

Like animals, plants have biological clocks that allow them to adapt to predictable changes, such as day-night cycles or the shift in seasons. While animals can relocate to adapt to such environmental changes, plants are stuck in place. To survive, plants need to activate and deactivate genes to alter their biological functions.

The research team used RNA-sequencing to identify how genes in the popular crop Brassica rapa are controlled by the plant’s internal time-keeping mechanism. The B. rapa species includes varieties such as turnips, oilseed, Chinese cabbage and leafy vegetables.

In the study, plants were exposed to normal conditions featuring warm days and cool nights. They were then removed from this environment and sampled over a two-day period to reveal which genes were active in response to signals from the plant’s internal clock.

The research found that over 16,000 genes, about three-quarters of all of the plant’s genes, are regulated by circadian rhythms in the absence of light and temperature changes.

“We were surprised to find that such a high number of genes are regulated by the biological clock. This emphasizes the importance of circadian clock control of many functions within the plant,” said McClung.

Many crop plants, such as wheat, potatoes and Brassica, have doubled or tripled their complete complements of genes. This led researchers to question what effect the additional gene pairs have on the plant’s biological clock, or on survival processes such as resilience to drought.

The research team found that the extra gene copies are often active at different times of day from their gene pairs.

In addition, the researchers found that often only one member of a pair of duplicated genes responded to drought. In both these cases, the differences in timing of gene activation, or in drought-responsiveness, must have occurred after the genes had duplicated.

The findings lead to the conclusion that the same gene duplication that is responsible for a more sensitive biological clock also creates more drought resistance.

“During the evolution of land plants, the number of gene pairs expanded,” said Kathleen Greenham, an assistant professor of plant and microbial biology at the University of Minnesota who co-led the study as a postdoctoral researcher at Dartmouth. “One set of copies can maintain critical growth processes while the others are free to evolve new functions that researchers can use to produce stress-resilient crops.”

Identifying the differences within gene pairs that cause them to be responsive or non-responsive to drought conditions could give researchers a way of helping plants increase resilience to climate-induced changes.

“Time of day matters for gene expression when it comes to dealing with drought,” said Ryan Sartor, a postdoctoral researcher at North Carolina State University who co-led the study. “This is an early step to help understand basic relationships. A more complete understanding of this complex system could lead toward the development of more stress-resistant crops.”

According to the research team, the circadian rhythms that regulate much of plant biology are likely to be influenced by climate change since environmental cues become less reliable. This makes it harder for plants to adapt and survive, but it also serves as a clue for researchers searching for ways to build plant resilience.