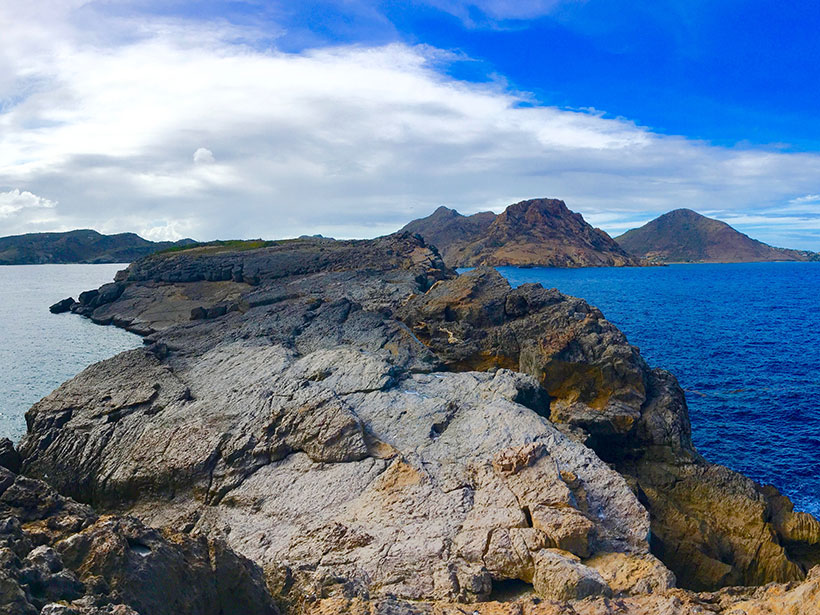 This work is dedicated to the memory of Gilles Merzeraud, who passed away on 30 October 2020. As a colleague and as a friend, he was a key figure of the GAARAnti team.

The islands of the West Indies—comprising the Greater Antilles, Bahamas, and Lesser Antilles—feature remarkable biodiversity, with species mainly having originated from South and Central America. These islands are regarded collectively as one of the 25 main biodiversity hot spots on Earth and the third in terms of endemism (a measure of the number of species that are found only in that geographic region) [Myers et al., 2000].

Charles Darwin noted that “the South American character of the West Indian mammals seems to indicate that this archipelago was formerly united to the southern continent, and that it has subsequently been an area of subsidence” [Darwin, 1873, p. 132]. However, the origin of Caribbean fauna and flora is still highly debated.

Similarities in observed morphological characteristics and genetics between species in geographically separated regions are commonly accepted as evidence that species migrated between these regions at some time in the past. When two populations of a species are separated and no longer interact, they often evolve into new, separate species, an event known as a population split.

The West Indies, with their geologic and ecological complexity, are an ideal natural laboratory to disentangle the interplay of geologic and biotic forces that shaped the islands’ distinctive biodiversity.

Since Alfred Wegener introduced the concept of continental drift early in the 20th century, studies of population splits based on fossil animals and plants have supported global tectonic theories. Plate tectonics theory, in return, has helped substantiate evolutionary scenarios that imply that population splits are more often driven by the development of geographic barriers (vicariance) than by species traveling across oceans.

The West Indies, with their geologic and ecological complexity, are an ideal natural laboratory to disentangle the interplay of geologic and biotic forces that shaped the islands’ distinctive biodiversity. In doing so, scientists may also reconcile proposed geologic and phylogenetic timelines in the region.

An ongoing controversy centers on how and when nonflying, nonaquatic vertebrates from South America reached eastern Caribbean islands. The rise, migration, and demise of island arcs having various sizes of emerged areas at the eastern boundary of the Caribbean Plate since the Paleogene (66–23 million years ago, Ma) undoubtedly influenced the means and timing of nonflying vertebrate species’ colonization of these distant islands. But a question already posed 40 years ago remains [MacFadden, 1980]: Did mammals raft across open water among landmasses, or did island arcs provide overland paths?

In an ongoing 5-year project, a multidisciplinary team of scientists, including us, is tackling this question anew, specifically looking to answer whether mammals traveled over a now submerged land bridge or whether they somehow rafted over the ocean to reach the Caribbean islands. Here we briefly present the midterm results of the first 2.5 years of the project.

The land bridge scenario posits a mid-Cenozoic land formation called GAARlandia (GAAR stands for Greater Antilles and Aves Ridge) that enabled animals to walk from South America to the islands of the eastern Caribbean some 34 Ma (Figure 1) [Iturralde-Vinent and MacPhee, 1999].

The GAARlandia vs Petites Antilles (GAARAnti) project, initiated in October 2017 and lasting through September 2022, has, for the first time, gathered a consortium of molecular phylogeneticists, paleontologists, biogeographers, geologists, geochemists, and marine geophysicists. The project targets the region of today’s Lesser Antilles subduction zone, where three major successive island arcs and two subduction zones have been recognized:

Our project aims to reconcile subduction dynamics and West Indies terrestrial mammal evolution and to test the GAARlandia hypothesis.

Previous research has taken approaches rooted mainly in either biology and paleontology or geology and geophysics. Attempts to integrate these approaches have still not considered a broad enough spectrum of data and perspectives to address the question of how mammals reached the eastern Caribbean comprehensively. In particular, currently available paleogeographic reconstructions present an incomplete picture of when and where areas emerged above the ocean’s surface at the eastern frontier of the Caribbean plate. Our project aims to reconcile subduction dynamics and West Indies terrestrial mammal evolution and to test the GAARlandia hypothesis.

Biogeographers have debated the South American origin of the Caribbean biota, as well as the biota’s evolution, since the advent of plate tectonics. The debate centers on two possible scenarios: Either mammals and other vertebrates rafted over the water or “hopped” from island to island multiple times during the Cenozoic (66 Ma to the present), or they traveled during a single dispersal event 35–33 Ma over a short-lived quasi-continuous land bridge: GAARlandia.

The GAARlandia hypothesis is supported by paleontological (fossil) studies showing the occurrence of South American mammals in Greater Antilles (synthesis by Iturralde-Vinent and MacPhee [1999]). Also, a growing number of molecular clock studies point to a clustering of species divergences near the time of the Eocene-Oligocene boundary some 34 Ma [e.g., Delsuc et al., 2019], supporting the GAARlandia hypothesis. However, other studies point to divergences at various times since the early Miocene (about 23 Ma), supporting the idea of multiple over-water dispersals. The main weakness of the single- and multiple-dispersal hypotheses is the general paucity of geologic data detailing the history of the Aves Ridge, which is now mostly underwater.

Indeed, the last marine geophysical campaigns and sample dredging expeditions in this area date from the 1980s, and detailed paleogeographic reconstructions of the eastern Caribbean are contradictive. In the GAARlandia hypothesis, evidence for the above-water emergence of the Aves Ridge comes mainly from dredged samples of volcanic pebbles, possibly from the late Eocene or early Oligocene and supposedly formed in subaerial domains and recovered with shallow marine sediments.

The GAARAnti project is focused on the Caribbean region between Puerto Rico and Grenada and covers four key areas of study. On-land geological fieldwork (sedimentology, petrology, tectonics) is helping track the history of emergence and submergence of the Lesser Antilles and Puerto Rico islands. Molecular phylogenetics and paleontological and biogeographical studies are examining recent and fossil mammal remains, collected during fieldwork and from museum collections. Offshore geological and geophysical records are shedding light on the tectonic evolution of the Aves Ridge and adjacent Grenada Basin. And numerical models simulating subduction-induced vertical motions and tectonic deformations of the Caribbean plate are complementing the geological and geophysical field observations.

Data from all these disciplines will enable us to reconcile the Antillean mammalian record with a refined view of Caribbean paleogeography.

In fieldwork to date, we have targeted St. Barthélemy Island (known to tourists as St. Barts) in the northern Lesser Antilles, which has not been studied geologically since the 1980s. Our work revealed that magmatic events there lasted over a much longer period—from 44 to 23 Ma—than was suggested by previous estimates, with a westward migration of the tectonovolcanic activity [Legendre et al., 2018]. A recent revision of the biostratigraphy of nearby carbonate platforms (sediment layers built up from corals, shellfish, and other organisms) confirms this hypothesis [Cornée et al., 2020].

Careful geological mapping of the island further revealed that it emerged above the ocean surface during the Oligocene (40–23 Ma). Thus, there were terrestrial lands in the Lesser Antilles that have not been considered within the GAARlandia landmass [Cornée et al., 2020]. To constrain paleogeographic reconstructions, we performed a paleomagnetic study of carbonate platforms and magmatic rocks. This study showed that St. Barthélemy underwent a counterclockwise rotation of about 15°, and perhaps as much as 25°, after the end of the Oligocene (23 Ma) [Philippon et al., 2020a]. Our results also highlight that the present-day trench curvature formed progressively during the Cenozoic (66 Ma to present). These results enabled us to consider different tectonic scenarios explaining plate deformation in the northeastern Caribbean (Figure 2).

GAARAnti scientists conducted molecular phylogenetic studies, using DNA to track hereditary differences, of recent fossils of Antillean rodents and sloths from museum collections. The results show that a group of Antillean sloths believed to share a common ancestor (the Megalocnoidea clade) split into different species around the time of the Eocene-Oligocene boundary about 34 Ma [Delsuc et al., 2019]. Independently, during our field investigations in Puerto Rico, we found the oldest known rodents in the Caribbean: two distinct species of chinchilloid caviomorphs, a strictly South American group of rodents, found associated within lower Oligocene sediments from about 29.5 Ma [Marivaux et al., 2020]. The timing of these fossil findings on sloths and chinchilloids is compatible with the GAARlandia hypothesis.

However, the molecular phylogeny of other caviomorph rodents of South American origin shows that the spiny rats (Echimyidae) colonized the Lesser Antilles later, by the middle Miocene between about 16 and 11.6 Ma [Courcelle et al., 2019]. These results suggest that the colonization of West Indies by land mammals occurred during at least two events: maybe first through the GAARlandia land bridge and later by over-water dispersal (Figure 3).

In May and June 2017, during an oceanographic cruise conducted mainly in the present-day Lesser Antilles back-arc domain aboard the R/V L’Atalante [Lebrun and Lallemand, 2017], we acquired three lines of wide-angle seismic refraction data, 3,560 kilometers of multichannel seismic (MCS) reflection lines, and 12 sample dredges. In addition, we collected gravity, magnetic, and bathymetry data along the same ship tracks.

The MCS data offer images of the stratigraphy along the Aves Ridge, revealing erosional surfaces that were once exposed to the air as well as tectonic structures relating the ridge flank to the Grenada Basin. Moreover, the combined seismic data, together with the gravity data, have helped us characterize the transition from the arc crust of the Aves Ridge to the oceanic crust in the southeastern part of the basin. These data will help us reconstruct the preopening paleogeography. In the northern Lesser Antilles, these data were combined with onshore geologic observations, revealing a formerly emerged but now vanished piece of land extending from Puerto Rico to St. Barthélemy [Philippon et al., 2020b].

We have also used 2D numerical modeling to estimate the vertical movements of the overriding Caribbean plate in relation to its velocity changes, such as its slowing down after 45 Ma [Cerpa and Arcay, 2020]. A 3D modeling study, currently in progress, is helping us assess the main parameters controlling the topography dynamics.

Did the Aves Ridge fully emerge from the ocean at least once, as posited in the GAARlandia hypothesis? Or did only portions of the Aves Ridge emerge, and if so, how many times?

As the GAARAnti project continues, we still have several questions to address in more detail. Did the Aves Ridge fully emerge from the ocean at least once, as posited in the GAARlandia hypothesis? Or did only portions of the Aves Ridge emerge, and if so, how many times? We must also quantify and establish precisely the timing of vertical motion of most Lesser Antilles islands and the Aves Ridge.

The paleontologists and molecular phylogeneticists in the project group will focus their efforts on unraveling a century-long controversy about the evolutionary history of recently extinct Caribbean rodents known as giant hutias. The “flagship” species of these rodents are the Pleistocene (2.58 Ma to 11,700 years ago) Amblyrhiza from the Anguilla Bank, which were as large as present-day American black bears, and the smaller Pleistocene-Holocene Elasmodontomys from Puerto Rico [Marivaux et al., 2020]. The planned threefold approach will use independent observations of craniodental morphology, postcranial anatomy, and ancient DNA to better constrain these animals’ phylogenetic affinities (similarities in characteristics that suggest a common ancestor) and divergence time. Will this divergence time be consistent with the GAARlandia hypothesis (i.e., a divergence at roughly 34 Ma) or with later dispersal events?

In the final stage of the project, we will combine innovative modeling with all the results of our biological and geological investigations to assess the processes—speciation, extinction, and dispersal—responsible for the patterns of biodiversity we see in the Caribbean islands today. We hope that this effort will resolve a long-lasting controversy in Caribbean biogeography.