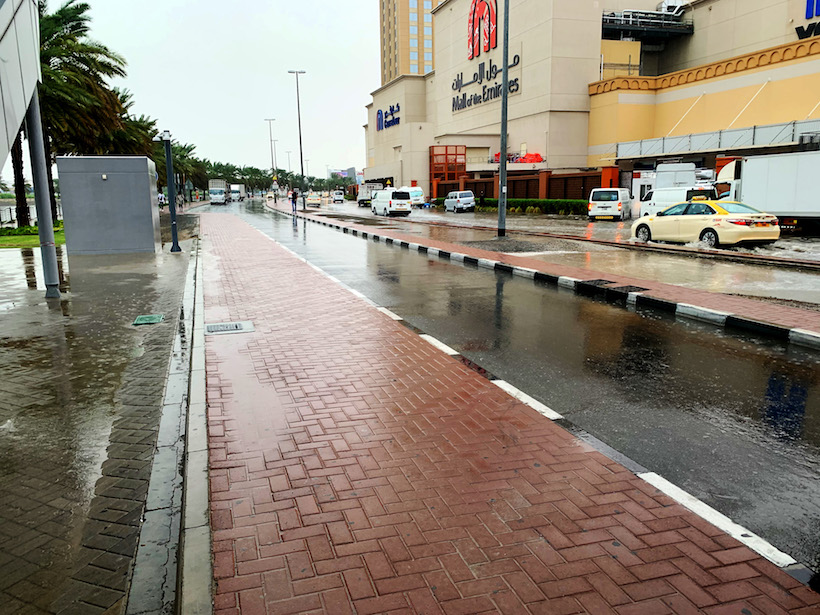 When figuring out flood risk, it’s important to collect data on past flooding events. In some areas, detailed records of rainfall and stream gauges are available. But in regions that are dry or sparsely monitored, this critical information is missing.

Enter a different kind of record: newspapers. Areas that have experienced flooding likely had an accompanying local news story documenting the event, including what particular areas were flooded and the extent of damage.

Researchers have now used these newspaper records to act as a validation for flood risk maps. When they compared their flood maps to almost 20 years of newspaper articles, they found a high correlation between reported floods and predicted, high-risk areas.

The scientists noted that their methods could be used by other researchers working in areas with spotty flood data. Their work may also be useful to policymakers and disaster managers to better prepare for future flooding.

Use What You Have

In the arid United Arab Emirates (UAE), flooding might not spring to mind as a regular event. But flash floods do occur in the UAE and are made worse by the proximity of cities to mountain foothills and the extent of urban impermeable surfaces, such as pavement.

A historical measurement of floods—including locations, magnitudes, and frequencies—is an effective field check of predictions.

Using geographic information systems (GIS), scientists can map out areas that may be prone to flooding, using familiar criteria like slope, geology, rainfall, geomorphology, and land use. But these maps parse out only the potential risk. A historical measurement of floods—including locations, magnitudes, and frequencies—is an effective field check of predictions.

“The proverb said, ‘Necessity is the mother of invention,’” said Mohamed Yagoub, professor of remote sensing and GIS at UAE University and lead author of the study, which appeared in Natural Hazards this past summer. “Researchers are sometimes faced with nonavailability and nonaccessibility of data. Therefore, they have to go around and use proxy means.”

Using GIS, Yagoub and his team generated a traditional flood risk map for the area surrounding Fujairah, capital of the Fujairah emirate in the UAE. About 85% of the land area was in medium and low flood risk zones, mostly in mountainous terrain. The remaining 15% of land was urban areas and coastal plains, considered high to very high flood risk zones.

Yagoub explained that his team wanted to make sure these high-risk areas had flooded in the past. To check their model, they turned to newspapers.

The researchers used five local papers (both Arabic- and English-language publications) to find records of historical flood events. “Reading many newspaper reports and scanning them for flood impact is a challenge,” said Yagoub. “To automate this process, a Java program was developed to read the document file and extract important flood damage information using text-processing functions.”

Using such a text-mining program, the team searched for words such as Fujairah, flood, evacuate, and water. From there, they gathered information on individual flooding events, including the general location, date, and what sort of damages occurred.

The team overlaid the historical events documented in newspaper articles on the map of potential flood zones to compare. They found that 84% of the reported floods were in high to very high flood risk zones.

“When it comes to flood risk, what we know is our probabilities calculations extrapolated over a map—that doesn’t mean that they reflect the real situation,” said Åse Johannessen, a water governance researcher at Lund University in Sweden who was not involved in the study.

Johannessen said that newspaper stories record real, not modeled, events, so they can be a good validation tool for risk mapping. “Not only that, it’s also information about the actual damage and in all kinds of details,” she said.

Yagoub called newspapers a “forgotten treasure” in defining areas of flood risk. “I came to know that newspaper archives contain a wealth of information, and many research questions could be formulated based on this information,” he said, adding that it would be even better if newspapers included accurate geographic coordinates of flooding events.

Johannessen also thinks newspapers provide a wealth of information, including how people behave in a flood. “For example, if you have a flood in a poor community, many people actually stay put because they want to save their assets.” Knowing community behaviors can help emergency managers better prepare for extreme events.

She noted that newspapers also highlight the vulnerabilities in a system: transport disruption, accidents, and weaknesses of infrastructure. “[Those vulnerabilities are] not captured by a flood risk map.”

“People talk about a cocktail of risks—that you don’t really know which risks influence each other and have a cumulative cocktail of effects,” Johannessen explained, adding that newspapers can help fill in the details of what happened during historical floods.

If planners can really understand the dynamics of a city and how to plan and where to put measures in a much more specific way, I think [this type of work] can be a big contribution,” said Johannessen.