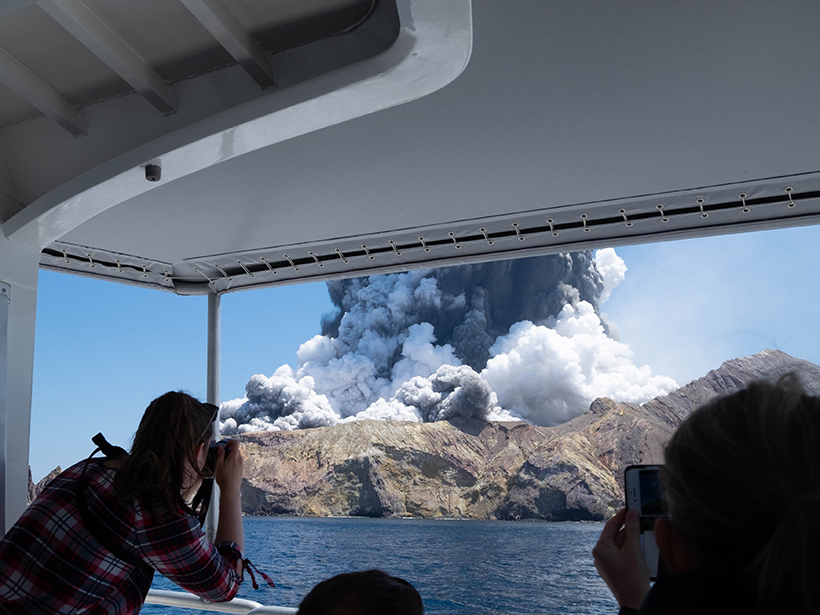 One year ago, the volcano on Whakaari/White Island erupted in New Zealand, killing nearly two dozen tourists and critically injuring many others. Survivors and family members of the victims have criticized companies for holding tours during heightened volcanic activity.

Now, scientists at the University of Auckland have invented a new way to forecast volcanic eruptions like the one on Whakaari/White Island. Repurposing a machine learning algorithm used in industrial manufacturing, authorities would have hours to days of warning before an eruption.

Had the system been around in 2019, it may have given warning some 16 hours before the fatal eruption.

The model is the first of its kind for sudden steam-driven eruptions and could be used at similar volcanoes around the world.

The forecasting model monitors ground tremors at Whakaari/White Island in real time and sounds the alarm if worrisome rumbles occur. Had the system been around in 2019, it may have given warning some 16 hours before the fatal eruption.

But without more data and testing, the model could overpredict or underpredict eruptions. Still, the model is more dynamic than the current alert system and caught four of five past historical eruptive periods during training. The model has been in testing since February.

One telltale sign of an impending eruption is a burst of seismic energy that appears hours to days beforehand.

The new forecasting model could be an important tool should visitors ever return to the island. Eruptive periods occur every 2–3 years on average, and the volcano has had five eruptive periods in the past 9 years. Last year’s event was its first deadly eruption in recent record.

One telltale sign of an impending eruption is a burst of seismic energy that appears hours to days beforehand, said David Dempsey, a computational geoscientist at the University of Canterbury who led the research while he was at the University of Auckland. In testing, the model identified the signal by analyzing data from past eruptions.

Dempsey believes that the seismic burst is one key to predicting the volcano’s explosive behavior. He thinks the signal comes from hot gas traveling upward from shallow magma pockets below the volcano. The hot gas then seeps into and heats shallow groundwater, creating a pressure cooker ready to blow. Eventually, the pressure becomes too great, and the volcano violently erupts.

“Seeing this 4-hour signal suggests that maybe something bad is going to happen a bit later on,” Dempsey said.

Can Machines Do It All?

One of the challenges of volcanic forecasting is that scientists don’t know the exact precursors that lead to sudden, explosive eruptions like those on Whakaari/White Island. Like Dempsey, other scientists have theories, but many questions remain unanswered.

Fortunately, the machine learning algorithm used in the forecasting model does not need to know the specifics. The algorithm looks at patterns in ground tremors, represented as the frequencies in a seismometer graph, and objectively detects similar patterns before eruptions. It triggers an alert if it determines there is more than a 1-in-12 chance of an eruption. The method removes human bias, said Dempsey, but also can lead to mistakes. During testing this year, the model falsely rang the alarm twice after earthquakes shook nearby.

“These systems are not 100%, of course,” said Dempsey. “But they improve our chances.”

“It is critical that advances like this tool are not seen as a silver bullet that will predict all steam-driven eruptions, which they cannot.”

The type of machine learning algorithm is called “time series feature engineering,” and it was originally designed for applications in industrial steel casting. The algorithms “were developed for manufacturing—for trying to determine when you needed to stop your robots because they needed to be repaired, but before they actually broke down.”

In this case, the algorithm has a library of about 700 patterns that it searches for in the seismic data beaming in from the volcano. “It’s happy to combine all of these patterns together and then apply the statistical test to say, ‘Yes, actually, this pattern does occur quite a lot more frequently prior to an eruption.’” Then the system sounds the alarm.

Yet the model did not predict a 2016 eruption during training because the cause of the eruption was different than that of past eruptions, said Dempsey.

“It is critical that advances like this tool are not seen as a silver bullet that will predict all steam-driven eruptions, which they cannot,” said Graham Leonard, a GNS Science senior scientist specializing in volcanic hazard and risk in New Zealand who is not involved in the research.

The forecasting model updates six times an hour, far faster than New Zealand’s volcano alert system, called VAL, which is based on the slower process of consensus between experts.

A Boon for Volcano Tourism

Dempsey, who visited the volcano in 2010, said being there is like “walking on the moon.” Tours haven’t returned to the island since the eruption last year.

“It is a great place to visit. And I hope that people do eventually go back and start visiting again, but things will need to change if that is bound to happen,” Dempsey said.

Dempsey thinks the new system could be adopted at other volcanoes in New Zealand. Like Whakaari/White Island, nearby volcanoes Raoul Island and Ruapehu have had recent explosive eruptions, one of which killed a man and another of which led to injuries so severe that a victim lost his leg.

The model could also be applied to volcanic regions around the world, said Dempsey. A steam-driven eruption at the Japanese volcano Mount Ontake killed 63 people in 2014. “We think there’s a good chance that these kinds of techniques could work there.”

Dempsey will present the forecasting model, published in the journal Nature Communications earlier this year, at AGU’s Fall Meeting 2020.