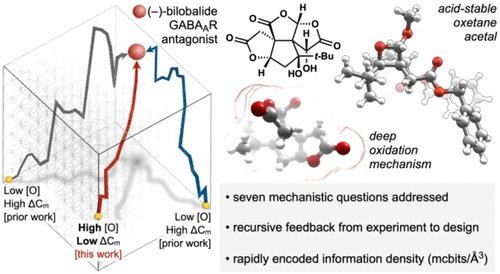 A team led by scientists at Scripps Research has developed a theoretical approach that could ease the process of making highly complex, compact molecules.

Such molecules are often found in plants and other organisms, and many are considered desirable starting points for developing potential new drugs. But they also tend to be highly challenging for chemists to construct and modify in the lab—a process called synthesis.

The team used computer modeling and a theoretical framework centered on the concept of “information density” to illuminate chemistry principles underlying their landmark 2019 synthesis of the molecule bilobalide, which is produced in the leaves of the ginkgo tree, Ginkgo biloba. Bilobalide is a particularly complex and compact molecule that has shown promise as a potential neurological or psychiatric drug.

The scientists believe that the theoretical fruits of their new study, published in the Journal of the American Chemical Society, will enable chemists to devise more efficient syntheses of such challenging natural molecules—potentially opening up a new realm of powerfully bioactive compounds for development into medicines and other products.

“When we initially achieved our synthesis of bilobalide, we were essentially following our intuition, but in this new study we dug down to understand how the chemistry actually works and developed principles that we think can be applied to other challenges in organic synthesis,” says Ryan Shenvi, Ph.D., a professor of chemistry at Scripps Research and the senior author of the study.

Bilobalide—which evolved in the ginkgo tree, likely to protect its leaves from insects—blocks an insect nerve-cell receptor called RDL. The fact that the molecule kills insects yet seems quite safe in mammals and dissipates quickly in the environment has attracted interest for safe crop protection.

Bilobalide holds strong promise for medicinal use, with evidence that it’s relatively safe for humans. It blocks human brain-cell receptors called GABAA receptors, which are evolutionary cousins of insect RDL receptors. An intriguing 2007 study found that the compound could reverse cognitive and memory deficits in mice with a neurological condition modeling human Down syndrome, while other studies have suggested it may protect brain cells from certain kinds of harm.

Although natural bilobalide is synthesized by specialized enzymes in the ginkgo tree’s cells, chemists would like to be able to make it in the lab with organic chemistry techniques. In this way, they could obtain large quantities of the compound and modify it to explore and optimize its properties.

But the synthesis of bilobalide has always been a major challenge for scientists, because the molecule packs a relatively complex set of atoms—including eight reactive oxygens—into an odd and highly compact chemical structure. If they could overcome that challenge, chemists would have a way to make molecules of potentially enormous value.

“When you have complexity that is condensed to that extent, you start to see interesting emergent properties,” Shenvi says.

In the study, Shenvi and his colleagues evaluated their 11-step synthesis of bilobalide, achieved in 2019, as well as two longer bilobalide syntheses that had been published previously.

With the help of computational modeling from collaborator Kendall Houk, Ph.D., the Saul Winstein Distinguished Research Chair in Organic Chemistry at UCLA, and a formal theory of “molecular information content” published in 2016 by German researcher Thomas Böttcher, they developed a concept of “information density”—essentially, complexity divided by molecular volume—and used that to analyze the bilobalide syntheses.

Their analysis showed that bilobalide, even compared with other naturally derived, compact and biologically active molecules, has a very high information density, and that its information content comes principally from its oxygen atoms and asymmetric carbon backbone.

The work revealed that the Shenvi lab’s synthesis of bilobalide was efficient due to fragment coupling—merging already-complex oxygen-containing molecules—and then making careful modifications to overcome the unusual emergent properties of the system.

The chemistry principles the team developed make sense of their bilobalide synthesis and its greater efficiency over prior syntheses, but are also applicable to many other unsolved problems involving natural-molecule synthesis, the researchers say.

As part of the work, co-author Stefano Forli, Ph.D., wrote a computer script in the Python coding language to automate the calculation of molecular information, which can be otherwise laborious, at the rate of more than 100,000 molecules per minute. (The script is available for download.) Forli is assistant professor in Scripps Research’s Department of Integrative Structural and Computational Biology.

Collaborating investigator Marisa Roberto, Ph.D., professor in the Department of Molecular Medicine at Scripps Research, studied the activity of bilobalide and another information-dense molecule, jiadifenolide, which Shenvi’s team also recently synthesized. In rodent studies, she found that both bilobalide and jiadifenolide showed promise as relatively potent and safe GABAA blockers, suggesting the potential for being translated into drugs for psychiatric conditions involving abnormal GABAA activity.

“The GABA system is dramatically altered in neuropsychiatric disorders such as alcoholism and other forms of addiction, for which one or both of these compounds might one day prove useful,” Roberto says.