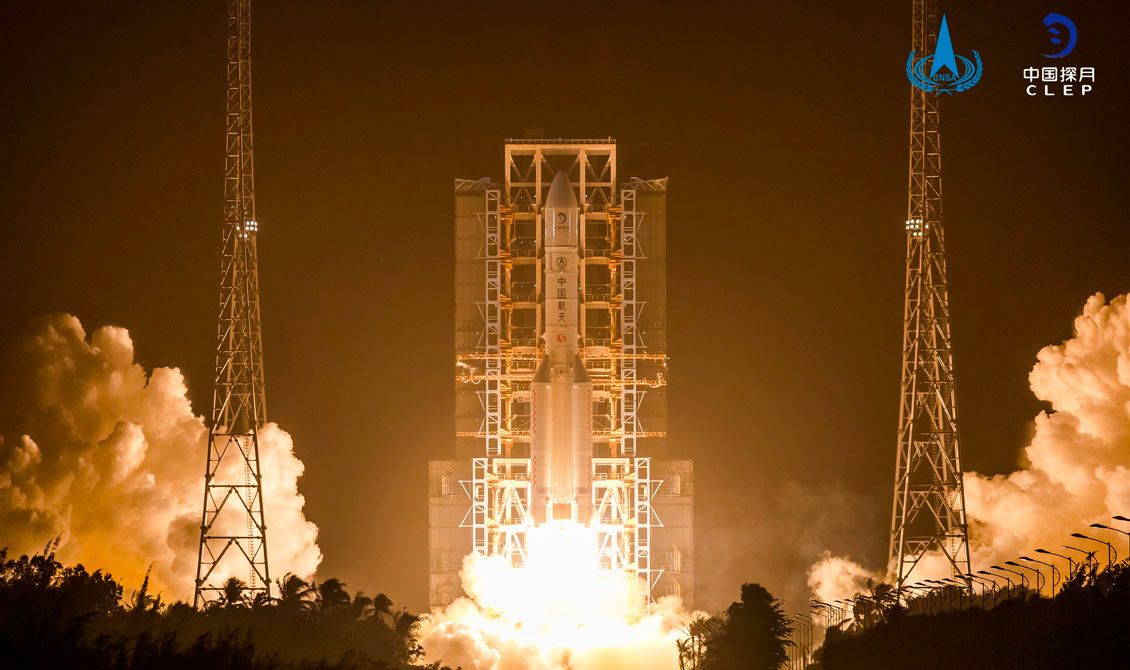 The first lunar sample-return mission since the 1970s is underway.

If all goes according to plan, the bold and complex Chang’e 5 will haul pristine moon samples back to Earth in mid-December — something that hasn’t been done since the Soviet Union’s Luna 24 mission in 1976.

In pictures: China on the moon! A History of Chinese lunar missions

Chang’e 5’s short mission will be action-packed. The 18,100-lb. (8,200 kilograms) spacecraft will likely arrive in lunar orbit around Nov. 28, then send two of its four modules — a lander and an ascent vehicle — to the lunar surface a day or so later. (Chinese officials have been characteristically vague about Chang’e 5’s details, so timeline information has been pieced together from various sources by China space watchers like Space News’ Andrew Jones, who also provides articles for Space.com.)

The mission will land in the Mons Rumker area of the huge volcanic plain Oceanus Procellarum (“Ocean of Storms”), portions of which have been explored by a number of other surface missions, including NASA’s Apollo 12 in 1969.

The stationary lander will study its environs with cameras, ground-penetrating radar and a spectrometer. But its main job is to snag about 4.4 lbs. (2 kg) of lunar material, some of which will be dug from up to 6.5 feet (2 meters) underground. This work will be done over the course of two weeks, or one lunar day — a firm deadline, given that the Chang’e 5 lander is solar-powered and won’t be able to operate once night falls at its location.

Mons Rumker harbors rocks that formed just 1.2 billion years ago, meaning that Chang’e 5 “will help scientists understand what was happening late in the moon’s history, as well as how Earth and the solar system evolved,” as the nonprofit Planetary Society noted its description of the mission. (The 842 lbs., or 382 kg, of moon rocks brought home by the Apollo astronauts between 1969 and 1972 are considerably older, providing a window in the deeper lunar past.)

The Chang’e 5 lander will transfer its samples to the ascent vehicle, which will launch them to lunar orbit for a meetup with the other two mission elements, a service module and an attached Earth-return capsule. The moon material will be loaded into the return capsule, which the service module will haul back toward Earth, releasing it shortly before a touchdown scheduled for Dec. 16 or Dec. 17.

“Whereas human-rated vehicles like NASA’s Apollo capsule relied solely on strong heat shielding, Chang’e 5 will perform a ‘skip reentry,’ bouncing off the atmosphere once to slow down before plummeting to a landing in Inner Mongolia,” the Planetary Society wrote. “The landing site is the same used for [China’s] returning crewed Shenzhou spacecraft.”

Pieces of heaven: A brief history of sample-return missions

Chang’e 5, China’s first-ever sample-return effort, is the sixth and most ambitious mission in the Chang’e program of robotic lunar exploration, which is named after a moon goddess in Chinese mythology. China launched the Chang’e 1 and Chang’e 2 orbiters in 2007 and 2010, respectively, and the Chang’e 3 lander-rover duo touched down on the moon’s near side in December 2013.

The Chang’e 5T1 mission launched a prototype return capsule on an eight-day trip around the moon in October 2014, to help prepare for Chang’e 5. And in January 2019, Chang’e 4 became the first mission ever to ace a soft landing on the moon’s mysterious far side. Chang’e 4’s lander and rover are still going strong, as is the Chang’e 3 lander. (The Chang’e 3 rover died after 31 months of work on the lunar surface.)

Chang’e 5 is part of a recent surge in sample-return missions. On Dec. 6, for example, pieces of the asteroid Ryugu collected by Japan’s Hayabusa2 mission are scheduled to touch down in Australia. And NASA’s OSIRIS-REx probe snagged a hefty sample of the asteroid Bennu last month; that material will come down to Earth in September 2023, if all goes according to plan.