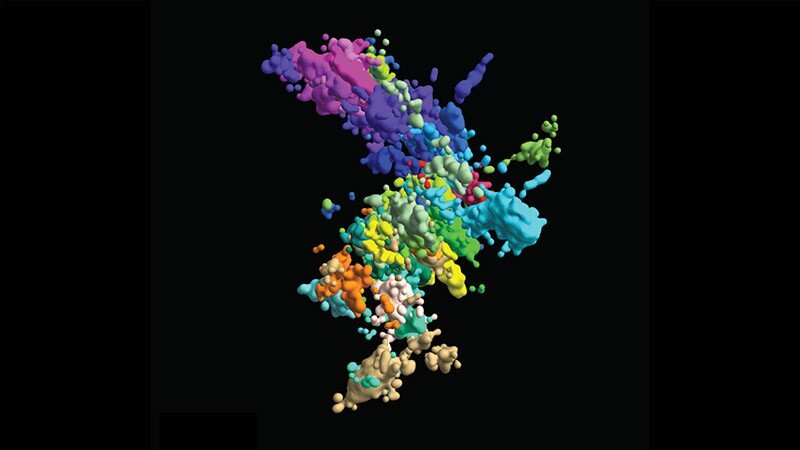 In high school textbooks, human chromosomes are pictured as wonky Xs like two hotdogs jammed together. But those images are far from accurate. “For 90 percent of the time,” said Jun-Han Su, “chromosomes don’t exist like that.”

Last year, before Su graduated with his Ph.D., he and three current Ph.D. candidates in the Graduate School of Arts and Sciences—Pu Zheng, Seon Kinrot and Bogdan Bintu—captured high-resolution 3-D images of human chromosomes, the complex houses for our DNA. Now, those images could provide enough evidence to change those Xs into more complex but far more accurate symbols to not only teach the next generation of scientists but help the current generation unravel mysteries about how chromosome structure influences function.

All living things, humans included, must create new cells to replace those too old and worn-out to function. To do that, cells divide and replicate their DNA, which is wrapped into labyrinthine libraries inside chromatin, the stuff inside chromosomes. Extended in a straight line, DNA in a single cell can reach six feet, all of which gets wrapped into tight, complex structures in a cell nucleus. Just one mistake copying or re-winding that genetic material could cause genes to mutate or malfunction.

Zooming in close enough to see chromatin structure is hard. But looking at both structure and function is harder still. Now, in a paper published in August in Cell, Zhuang and her team report a new method to image the structure and behavior of chromatin together, connecting the dots to determine how one influences the other to maintain proper function or cause disease.

“It’s quite important to determine the 3-D organization,” said Zhuang, the David B. Arnold, Jr. Professor of Science, “to understand the molecular mechanisms underlying the organization and to also understand how this organization regulates genome function.”

With their new high-resolution 3-D imaging method, the team started to build a chromosomal map from both wide-lens images of all 46 chromosomes and close-ups of one section of one chromosome. To image something that’s still too small to image, they captured connected dots (“genomic loci”) along each DNA chain. By connecting a lot of dots, they could form a comprehensive picture of the chromatin structure.

So, Zhuang and her team came up with a sequential approach: Image three different loci, quench the signal, and then image another three in rapid succession. With that technique, each dot gets two identifying marks: color and image round.

Still, to cover the whole genome, they needed more—thousands—so they turned to a language that’s already used to organize and store huge amounts of information: binary. By imprinting binary barcodes on different chromatin loci, they could image far more loci and decode their identities later. For example, a molecule imaged in round one but not round two gets a barcode starting with “10.” With 20-bit barcodes, the team could differentiate 2,000 molecules in just 20 rounds of imaging. “In this combinatorial way, we can increase the number of molecules that are imaged and identified much more rapidly,” said Zhuang.

With this technique, the team imaged about 2,000 chromatin loci per cell, a more than ten-fold increase from their previous work and enough to form a high-resolution image of what the structure of chromosomes looks like in its native habitat. But they didn’t stop there: They also imaged transcription activity (when RNA replicates genetic material from DNA) and nuclear structures like nuclear speckles and nucleoli.

With their 3-D Google Maps of the genome, they could start to analyze how the structure shifts over time and how those territorial movements help or hurt cell division and replication.

Researchers already know chromatin is broken into different areas and domains (like deserts versus cities). But what those terrains look like in different cell types and how they function is still unknown. With their high-resolution images, Zhuang and team determined that areas with lots of genes (“gene-rich”) tend to flock to similar areas on any chromosome. But areas with few genes (“gene-poor”) only come together if they share the same chromosome. One theory is that gene-rich areas, which are active sites for gene transcription, come together like a factory to enable more efficient production.

While more research is needed before confirming this theory, one thing is now certain: local chromatin environment impacts transcription activity. Structure does influence function. The team also discovered that no two chromosomes look the same, even in cells that are otherwise identical. To discover what each chromosome looks like in every cell in the human body will take far more work than one lab can take on alone.

“It’s not going to be possible to build just on our work,” Zhuang said. “We need to build on many, many labs’ work in order to have a comprehensive understanding.”